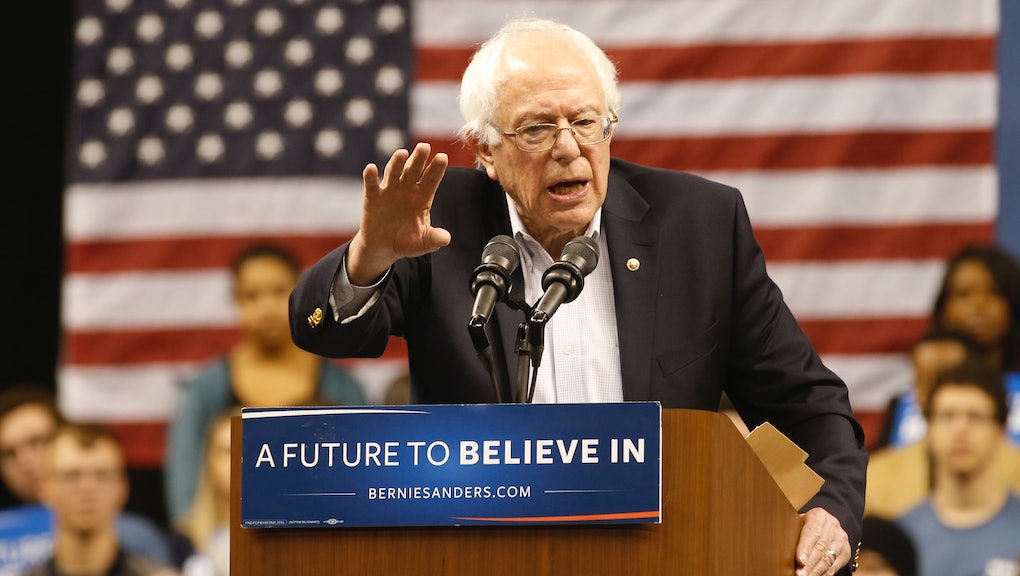 How Bernie Sanders Hopes to Bounce Back After South Carolina

Dismissed as a fringe candidate of the left, few experts gave the insurgent Vermonter much of a chance when he entered the presidential race. Dinged as a "single-issue" candidate, he looked unlikely to assemble the broad coalition necessary to capture the Democratic nomination. Even paid staffers had a hard time seeing how their boss would overcome the daunting odds — particularly with the forces of the Democratic Party establishment arrayed against them.

After Sanders' landslide loss to Hillary Clinton in Saturday's South Carolina primary —  which comes on the heels of a demoralizing defeat in last weekend's Nevada caucuses — the senator looks more and more unlikely to escape the fate that bedeviled Dean's anti-war insurgency a dozen years ago, when the former Vermont governor surged to the front of the pack before fizzling in the Iowa caucuses.

An uphill slog: While both men exceeded expectations by igniting the passions of a restive Democratic base, they've also run up against the brutal realities of campaigning against opponents who have spent years or even decades building ties to party elites, voters and financial bigwigs.

"All insurgents start with the idea that they're probably not going to win, but damn it, we're going to make a run at getting our issues out there," Joe Trippi, Dean's campaign manager and a veteran Democratic operative, told Mic. "And then there's always that moment when you start to get enough momentum and coverage and money that you cross the line and start to realize for the first time, maybe we can win this thing."

"The problem with all insurgencies," Trippi said, "is that it's just a reality: You're building the entire plane literally as it's rolling down the runway."

Sanders' campaign hopes to flip the script of the Democratic contest on Super Tuesday this week. Of the 11 states that vote on March 1, the senator stands a good chance of winning five.

Vermont is in the bag; polls show Sanders leading Clinton by a whopping 75 percentage points in his home state. In neighboring Massachusetts, the latest surveys indicate that Sanders is either tied with Clinton or slightly ahead of her. A win there wouldn't just award Sanders a large chunk of its 91 pledged delegates; like New Hampshire, it would also allow him to boast that he'd picked up a state Clinton won over Barack Obama in 2008.

Colorado and Minnesota — both states with strongly progressive Democratic electorates — should also be fertile ground for Sanders. Public polling of the two states has been sparse, but the 2008 caucus results give Sanders hope: Obama trounced Clinton by 34 points in the Colorado caucuses, the same margin by which he defeated her in Minnesota. A large turnout in the two states — particularly in college towns like Boulder and Minneapolis-St. Paul — would be an encouraging sign for Sanders.

Then there's rock-ribbed Oklahoma — hardly the kind of state you might expect a 74-year-old Jewish socialist to target. But a recent Public Policy Polling survey of the Sooner State showed Sanders statistically tied with Clinton there, and despite its strong Republican lean in general elections, Oklahoma has a history of vibrant left-wing activism. In the early 20th century, the Socialist Party gained a major foothold there, with its gubernatorial candidate winning 20% of the vote in 1914.

Later in the century, Oklahomans sent Fred Harris, a liberal populist, to the United States Senate. So while conservative Republicans now have a monopoly on both state and federal politics in the state, Sanders is tapping into a strain of Oklahoma history that may reap dividends on Tuesday.

On the surface, that seems like quite the dramatic improvement over the ominous headlines that greeted his defeats in Nevada and South Carolina. What's more, few Southern contests will remain after March 1 — meaning that the race will then turn to territory where the demographic and ideological makeup of Democratic voters is more hospitable to Sanders.

There's one big problem, though: Relative to where he needs to be in order to overtake Clinton in the delegate count, Sanders is badly underperforming in those friendly states.

Exhibit A: Sanders couldn't win Iowa — a state that's nearly 90% non-Hispanic white, and where Democrats lean strongly to the left.

"If Sanders was ever going to win anywhere, Iowa was one of those states," Democratic strategist Mary Anne Marsh told Mic in a recent interview.

Statistics guru Nate Silver concurred. Analyzing states by demographic data at FiveThirtyEight, Silver calculated that Sanders should have trounced Clinton by 19 percentage points in the Hawkeye State. Instead, he lost to her by 0.2 points. Even Sanders' 22-point New Hampshire rout was probably too close for comfort: According to Silver's figures, Sanders should have beaten Clinton by 32 points in the Granite State.

Post-Super Tuesday, Sanders must also hold off Clinton in a number of large, delegate-rich states. Silver's numbers show that he needs to narrow beat Clinton in Michigan on March 8, effectively tie her in Ohio and Missouri a week later and then score narrow wins in Pennsylvania and New York in April. California's June primary also ought to be roughly a draw, Silver's numbers state.

In all states, Sanders currently trails Clinton badly in the polls.

Abandon all hope? This is not to say that Sanders might as well pack up and go home.

Sanders can afford to win states like Massachusetts and Minnesota by smaller-than-optimal margins if he can give Clinton a run for her money among nonwhite voters — leading her to underperform in states where she's expected to dominate.

But the results in South Carolina underscore what a tall order this will prove. Despite a concerted effort to appeal to African-American voters, and weeks of rising visibility thanks to his near-victory in Iowa and his landslide win in New Hampshire, Sanders lost black voters by 68 percentage points.

It'll be difficult for Sanders to avoid similarly lopsided defeats in other states.

"Had they had the resources and visibility they have [now] and if they were making the arguments they're trying to make now a year ago," Trippi told Mic, we might be looking at an entirely different race.

Given the realities of political insurgencies, though, Sanders will struggle "to connect or break into her stronger constituencies," he added.

"It's the problem of coming from where they were coming from, probably not thinking they had a chance," Trippi said.

But Sanders has the resources — and the incentive — to remain in the race through the final contests in June, even if his odds of defeating Clinton are long. The more delegates he can accrue, the more clout he and his supporters will have in shaping both the Democratic Party's platform and the personnel and policy decisions a President Hillary Clinton would make.

For a long-shot candidate who was polling the single digits when he launched his bid last spring, that's a victory of its own.

Watching Sanders' trajectory, Trippi can't help but think of his own experience on the Dean campaign.

"After you are in a big insurgency like that, at the end of it, it was the greatest experience of your life," he told Mic.

"The next words out of your mouth are, 'Please God, don't ever let me do that again.'"