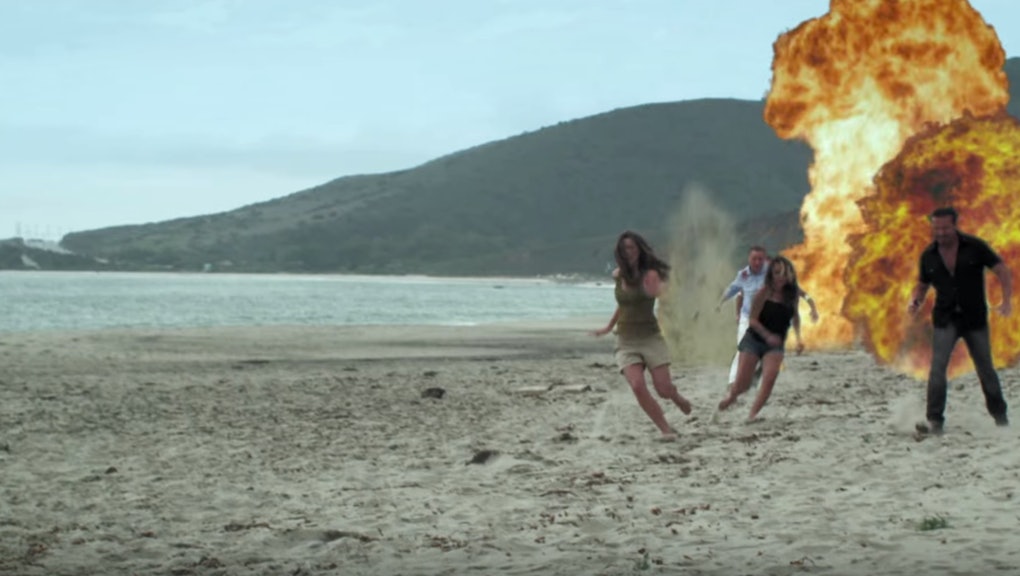 The Best, Worst Horror Movies Netflix Has to Offer — And Boy Are They Bad

It's probably not a surprise, but there are a lot of horrible horror movies produced every year — the worst of the worst gain cult status for their sheer awfulness. As a whole, the horror genre has perhaps the largest disparity when it comes to film quality. Yes, movies like It Follows and Evil Dead are critically acclaimed, but you can also find a plethora of films on par with Troll 2 or The Wicker Man.

Horrible films have their own followings, a "so bad, it's good" vibe that captivates viewers. Thankfully, a lot of the best worst movies released are available on a platform we have our own addictive love affair with: Netflix. Here are six of the movies — some you might have a love-hate relationship with, others you might purely despise — on the streaming service, for your viewing pleasure.

Shark Week: You can essentially categorize any non-Jaws shark movie as a failure, but Shark Week is a particular kind of awful in a way that isn't as increasingly self-parodying as the Sharknado series. Instead of a straight shark attack film as the name might imply — it isn't the Discovery Channel either — Shark Week strands a group of people on the isolated island of a wealthy madman, in what could be the worst-case version of a campy episode of Survivor. Of course, as part of their death gauntlet, they have to deal with a lot of hungry sharks, and, apparently, explosions.

Killer Mermaid: Another sea-creature concept, Killer Mermaid is, you guessed it, about a killer mermaid. The film follows the ancient lore that mermaids lure and kill people by the ocean. However, this particular mermaid lives near an abandoned military fortress, and even with the warning of a local to stay off the land, a group of tourists decide to visit the island anyway.

Killer-mermaid films are certainly a niche genre, but Killer Mermaid is not one that deserves any attention.

Spiders: Granted, lots of people have arachnophobia, but the backstory to Spiders doesn't make much sense — even for B-movie standards. Apparently, in the fictional world Spiders creates, the Soviets had harbored killer spiders in a space station, and it conveniently crash lands in New York City. Apparently, the director is known for his, let's just say, creative projects.

"It was directed by Tibor Takacs," said a review on Movies.com. "Oh, you don't know him? Well then you didn't watch his earlier stab at cinema, Mansquito, which is the greatest TV movie of all time."

Stage Fright: In fairness, a horror musical sounds really difficult to pull off. The catastrophe that is Stage Fright only proves this point. It's unfortunate, as the film holds some intrigue with its plot — especially with the stark and intentional similarities to The Phantom of the Opera. In the end, however, it doesn't hold enough weight to work within the realms of horror, comedy or musical. It falls flat, just like some of the musical numbers.

"Whether it's being sexy, jokey or homicidal, Stage Fright doesn't deliver the goods with sufficient spirit," Mark Jenkins wrote for the Washington Post. "It lacks the sparkle to be a truly killer show."

The Last Days on Mars: Zombies have unexpectedly become a versatile tool in films. Most notably, they have been used under the guise of an infectious outbreak, such as in 28 Days Later or World War Z. However, putting zombies on Mars really makes no logical sense — and as a result, The Last Days of Mars follows a routine monster trope in an unnecessary setting.

However, it's not just that The Last Days on Mars makes no sense. In contrast, using other monsters in outer space can be executed well — just look at the high critical praise for Europa Report, which is about an alien octopus on a moon of Jupiter. The Last Days on Mars is just lazy and standard horror fare.

The original at least somewhat sticks to the source material, (which, again, is just a short story) but the others take the concept of "little kids are inherently creepy on their own" and completely abuse it.