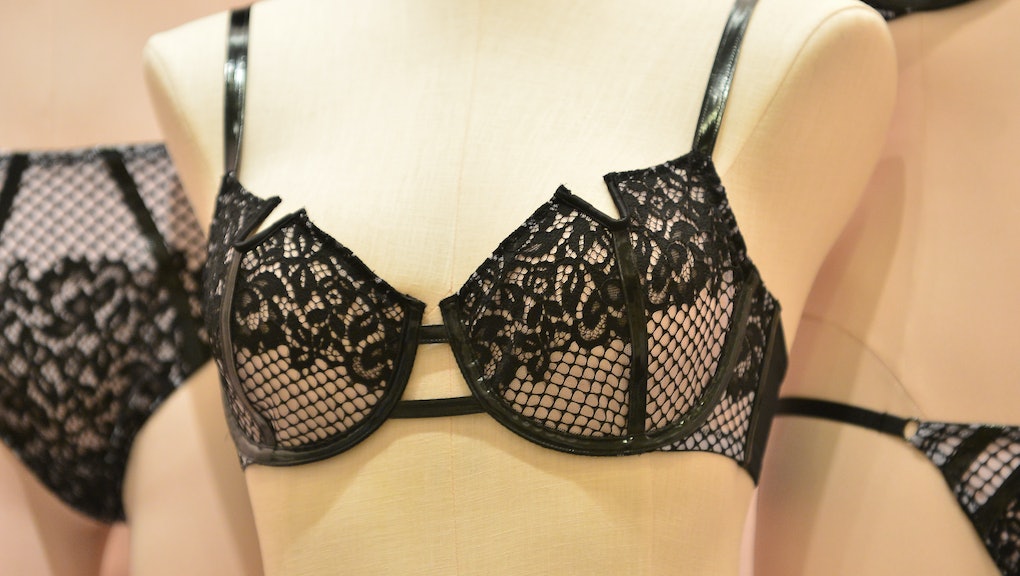 Lingerie companies love hammering home the statistic about women that "85% are wearing the wrong size [bra]." As The Cut's Maureen O'Connor explained back in 2013, telling women this brings customers into fitting rooms and ultimately aids sales.

Here's what the bra stores don't tell you: If you are wearing the wrong bra size, getting fitted won't necessarily solve all your problems. Women so commonly choosing the wrong bra size can be partially attributed to a fundamental misunderstanding of how bras are intended to fit.

Read more: Believe It or Not, the Victoria's Secret Fashion Show Has a Boob Problem

Another factor: While the average U.S. woman is a size 34DD, according to a 2013 survey, the most popular lingerie store in the U.S. only stocks its stores with sizes up to a 40DDD. Obviously I'm talking about Victoria's Secret.

With over 1,100 stores in the U.S. and Canada and reported control of 35% of the U.S. market, if you're an American who wears a bra, you've probably visited the inside of a Victoria's Secret at some point in your life. But its sizing options, which all but erase the existence of women whose busts exceed 36DDD, seem disproportionate to the ubiquity of the company's presence.

When I was 15, a Victoria's Secret employee told me I was a 36DDD. I wore that size for all four years of high school. Despite persistent discomfort — boobs spilling over if I bent over without holding them in, constant poking of too-small underwires into my flesh, needing to readjust my straps every five minutes — I never suspected I was wearing the incorrect size.

I trusted the sales associates at Victoria's Secret, assuming the discomfort was the reality of being a woman with sizable breasts. (I was hardly crazy for believing this, given the discomfort women routinely endure. See: high heels.)

My real size, I later learned by getting fitted at more upscale lingerie stores such as Journelle and Linda's, is a 30G.

Why was my fitting experience so bad? Why could I not get someone in America's biggest bra chain to get me a good-fitting bra? To get to the bottom of it, I went to a Victoria's Secret location in New York City's Flatiron District accompanied by a friend with a smaller cup size to get fitted.

Our experiences could not have been more different.

Failure to focus on fit: While my smaller-chested friend was fitted into a 34C, describing the fitting as "careful" and "thorough," my experience was something else entirely. The same fitter haphazardly held the measuring tape up to my chest and handed me a 34DD. When I said it was too small, she returned with what I expected: a 32DDD. After leaving to go attend to another customer, I never saw her again.

The DDD was not even close to being big enough to carry the bulk of my chest — the underwire didn't sit flat on my chest, the band was too high and my boobs were popping out over the top. Her disappearance highlighted something I'd been thinking all along: I didn't belong there.

In fact, seeing my boobs practically falling out of the too-small bra made me laugh. I looked at the $50 price tag and thought of the countless women who've been sold the incorrect size, who've wasted their money on a product that won't adequately do its job.

In a confessional post on xoJane, a former Victoria's Secret employee admitted she lied about bra sizes to avoid the socially uncomfortable experience of telling a young girl the store didn't carry her size. By avoiding that kind of social discomfort, she was essentially condemning that young woman to hours, if not years, of physical discomfort.

I spoke to another woman who worked at the chain from 2009 and 2012, who said she was never taught to compromise sizing for the sake of sales and that she received thorough training on how to fit, in a way she believes is "industry standard."

Overall, the message I got in the store, this time and in times past, was that big-boobed women weren't going to find much help.

(Mic reached out to Victoria's Secret for comment but had not heard back as of press time.)

Setting an ill-fitting standard: Look through the Victoria's Secret catalog, and you'll see even the models typically are wearing the wrong bra size. Brittany of the blog Thin and Curvy pointed this out, analyzing one Victoria's Secret ad:

1. You can clearly see her breast tissue spilling out the sides although they have tried to smooth it with Photoshop.

Sexy bras can be empowering, but based on the company's advertising and mediocre fitting, Victoria's Secret seems to think that sexiness is the primary function of a bra.

For millions of people like myself, a bra is a necessary tool for functioning comfortably in our everyday lives. For women with big breasts, bras are what let us run, do cartwheels and simply exist without fearing the dreaded nip-slip. After all, most bras are intended to be worn under a top, not simply on their own.

Boobs are like snowflakes — no set is exactly like another. Ratios between band and cup size, varying sizes between a single pair of breasts and differing heights of breasts on chests are just some factors that make bra sizing inherently complicated. But plenty of lingerie stores — including Journelle, Nordstrom and online retailers like Bare Necessities — manage to sell an inclusive range of sizes.

Due to its many locations and large advertising budget, one can often feel Victoria's Secret is the only option on the market. Luckily, though, there are other stores with more-reputable fittings; one popular example is Nordstrom's in-store fitting specialists, while startups like Naja continue to attract new customers.

Even if they don't have a storefront in your hometown, many lingerie companies have online stores where you can order any size imaginable, with ever-improving algorithms and tools to nail the right fit.

So if you think you may be wearing the wrong bra size, explore your options — not only with more sizes, but with more stores. Even if you don't have access to a professional, you can find a better-fitting bra with one simple rule: If it's not comfortable, it's not for you.