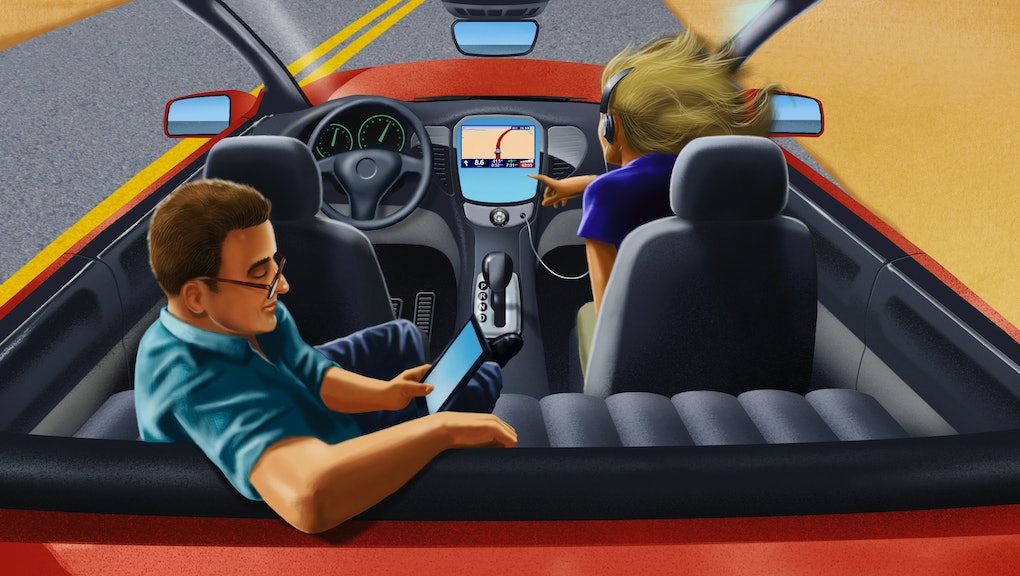 Top tech companies from Google to Uber, and even traditional car companies like Volvo, are trying to bring about an era where cars drive themselves. While the promise of such innovation is golden, a new study suggests there are environmental hazards we might not have considered.

"Automation is not going to save us, at least not without additional policy guidance — and it could make things worse," Don MacKenzie, co-author of the University of Washington paper and an assistant professor of transportation engineering, told Mic.

So far, studies have focused on the advantages of automated vehicles. According to a separate study from 2013, benefits include less traffic congestion, increased safety, better fuel economy and fewer parking costs — a car could, in theory, drive itself home only to be summoned at a later time.

However, a study out of the University of Washington, University of Leeds and Oak Ridge National Laboratory says that roadways filled with autonomous vehicles could lead to an increase in carbon emissions.

The reason for that: self-driving cars' increased efficiency and accessibility. In addition to regular drivers, people who haven't been able to drive before — like the elderly and people with disabilities — will now be able to commute. And the efficiency that arises from roads full of self-driving cars could also entice businesses to ship goods via autonomous truck rather than train — again, pulling more cars onto the road. The same could go for people considering public transit, which isn't exactly sprawling in the U.S. to begin with.

"If you have the automation and every one still owns their vehicles, that's sort of the worst of both worlds," MacKenzie told Mic. "Now you have low cost of operations, and people still own the vehicle, so it's cheaper than ever for people to just go out there and drive, drive, drive."

But putting more cars on the road may not be as big of an issue as the inevitability of longer drive times.

Because driving will be less burdensome, distance will no longer be a barrier to driving. Hour-long or two-hour-long commutes become less foreboding when that time can be spent working or watching a movie rather than staring at the road or sitting idly in traffic.

That all theoretically equates to more cars on the road, plus more cars driving farther and more regularly, again forcing up emissions.

But those impacts all depend on federal and state governments advising on best practices to implement this new technology. For instance, if there's a push for electric or hydrogen-powered vehicles, environmental impacts may be lessened, MacKenzie told Mic. Emphasis on autonomous cars inside ride-sharing systems, like Uber, could also encourage people to drive less.

"The basic idea is that when you own your own vehicle, you pay a large fixed fee upfront and the variable cost of driving is relatively small," MacKenzie told Mic. "With these services, you pay nothing or very little up front but your marginal costs, [and] your cost per trip is a lot higher. So people tend to be more judicious about when and how much they travel. If we get to a world where everyone is using a shared automated taxi system, there's a lot of potential there."

Furthermore, self-driving cars, particularly within these shared circumstances, could lead to what MacKenzie calls "right-sizing" — matching the appropriate-sized car to each activity. Imagine calling an cab for a single passenger and getting a pod-sized vehicle with just enough room for you. Alternatively, if the occasion calls for an eight-passenger vehicle; the car service could then send over a van.

But to usher in the benefits of self-driving cars, concludes the study, regulators need to get involved. Realizing the great potential of vehicle automation lies in how the public sector and private sector can work together to mitigate the risks.