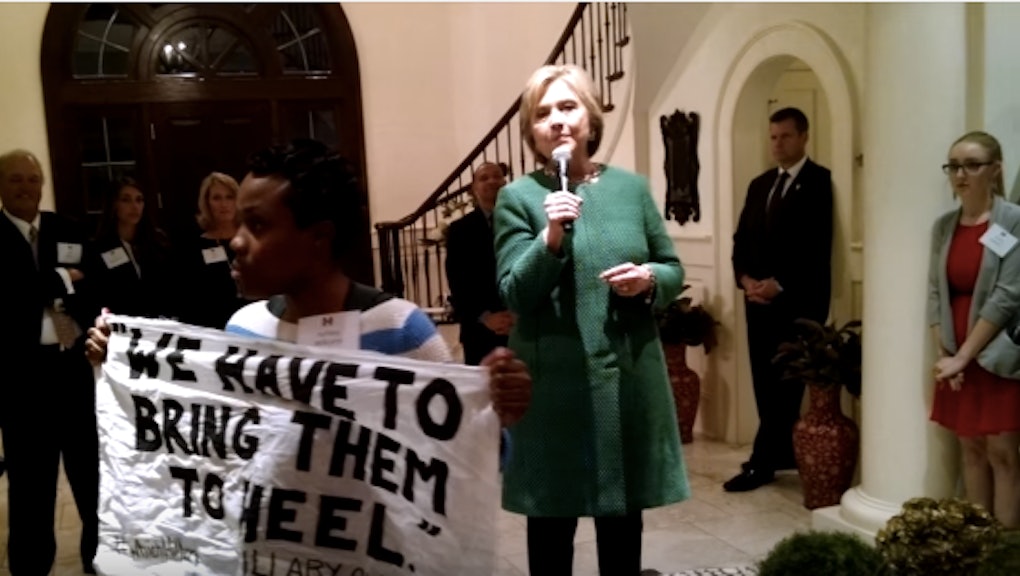 Presidential hopeful Hillary Clinton has certainly come under fire for her record on issues of racial justice before. But on Wednesday, the video of one Black Lives Matter activist's question about a specific 1996 comment on at-risk-youth went viral — forcing Clinton to address and apologize for her past statement.

On Wednesday, Ashley Williams confronted Clinton at a private Charleston, South Carolina, fundraiser, according to the Huffington Post. While holding a banner quoting Clinton's statement that "we have to bring them to heel," Williams asked Clinton to apologize to black Americans for mass incarceration.

"Looking back, I shouldn't have used those words, and I wouldn't use them today," Clinton told the Washington Post's Jonathan Capehart on Thursday.

The comment in question was one Clinton made in regards to criminals, whom she called "super predators."

In her apology, Clinton explained that this statement was made in regards to the impact of "violent crime and vicious drug cartels" and the "particular danger they posed to children and families." Her life's work, she added, "has been about lifting up children and young people who've been let down by the system or by society," and said she plans to continue to advocate for replacing the school-to-prison pipeline with a "cradle-to-college pipeline."

This isn't the first time Clinton has faced criticism for her previous policies affecting African-Americans but perhaps the one that has sparked the most backlash. On Thursday, the hashtag #WhichHillary began trending on Twitter in response to the incident.

"I wanted to bring her to confront her own words," Williams told the Huffington Post on Wednesday. "We did this because we wanted to make sure that black people are paying attention to her record, and we want to know what Hillary we are getting."

But Clinton maintains she supports all children. She concluded in her apology, "my campaign for president is about breaking down the barriers that stand in the way of all kids, so every one of them can live up to their God-given potential."