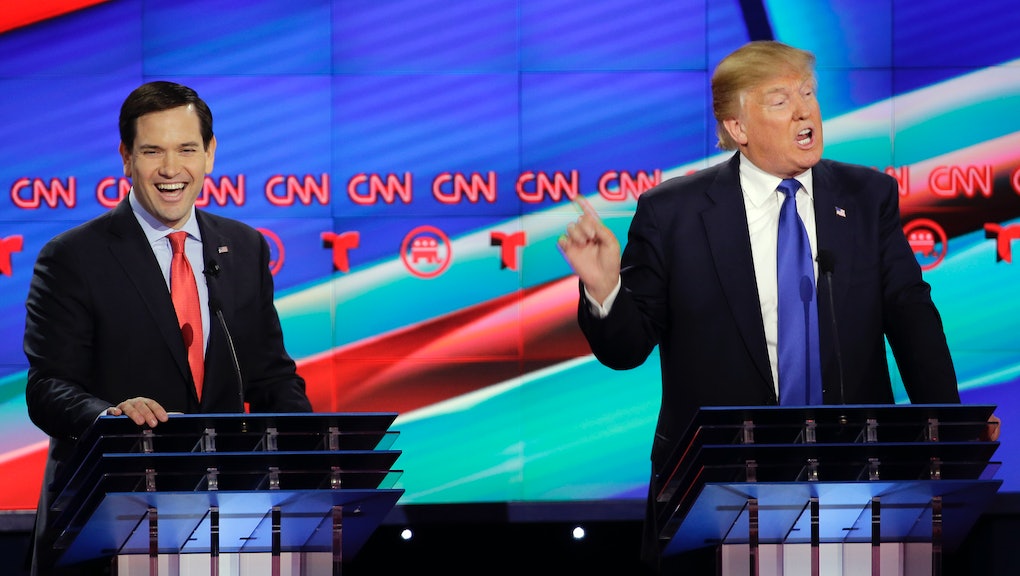 Let's Get Real: Marco Rubio's Sharpened Attacks on Donald Trump Are Too Little, Too Late

Until Thursday, you could've been forgiven for thinking that Marco Rubio and Donald Trump weren't seeking the same job.

For the better part of a year, the Florida senator focused on boxing out his Republican rivals for establishment support, including onetime mentor Jeb Bush, later engaging Ted Cruz as he looked to cut into the crusading Texan's support among conservatives. But Rubio assiduously avoided confronting Trump, even as the billionaire real estate developer remained perched atop the GOP presidential field.

That changed at the 10th Republican presidential debate on Thursday.

High stakes: Taking the stage at the University of Houston, Rubio faced a daunting reality. Unlike Trump and Cruz, he has yet to win a single nominating contest. With Trump having won the past three contests — and poised to win the lion's share of the contests in early March — it's exceedingly difficult to see how Trump isn't the prohibitive favorite to become the GOP standard-bearer this fall. If Rubio hoped to reset the race's narrative, a hands-off approach wasn't an option on Thursday.

So Rubio launched an all-out offensive, blasting Trump on everything from his record on immigration to health care reform to his personal inheritance.

Though Trump was far from unprepared for Rubio's jabs — and even seemed to get the better of a few exchanges — it was one of the Floridian's most forceful performances yet.

The cold, hard facts: It's possible, had Rubio landed his punches on Trump last fall, that he could have halted the billionaire's ascent.

It's also possible that it wouldn't have made any difference — or that it would have damaged Rubio, as a counter-punching Trump would have laid into Rubio for his cozy ties with mega-donors and lobbyists, his eyebrow-raising personal finances and his leading role in the 2013 fight for comprehensive immigration reform.

This much is clear: The road to the GOP nomination is littered with the political carcasses of those who thought they could make a splash by taking on Trump, only to wither in the face of his relentless attacks. Ask Rick Perry, Bobby Jindal, Lindsey Graham, George Pataki, Carly Fiorina, Jeb Bush or the rapidly fading Ted Cruz how going after Trump worked out for their campaigns.

Of course, Rubio boasts a rhetorical prowess, intraparty popularity and general-election viability that none of those candidates could match. More than anyone else, perhaps he could have rallied broader support had he moved long ago to establish himself as the field's anti-Trump.

Running against the clock: Political junkies could game out the counterfactuals all day. But here's what we know: Rubio didn't decide to start treating Trump like a frontrunner until the businessman had already built a 4:1 lead in the delegate count —  a lead that's all but certain to hold after the Super Tuesday contests, given that Trump's healthy advantage in the states set to vote next week.

Two weeks later, Rubio's campaign may well sustain a fatal blow. A Quinnipiac University poll released Thursday found Trump thumping Rubio in his home state of Florida, where the winner of the March 15 primary runs away with all 99 delegates. Trump garnered 44% support in the survey, followed by Rubio at 28%, Cruz at 12%, John Kasich at 7% and Ben Carson at 4%.

Will belated attacks on Trump's conservative bona fides and his wealth change the dynamic? The graybeards of the Republican establishment, where hope springs ever eternal, may believe so because they need to believe so, unable as they are to reconcile themselves to the fact that this party, their party, is slipping from their grasp.

But Trump — never a masterful debater — has absorbed some tough hits before, only to steamroll on amid persistent anti-establishment fervor in the Republican electorate. Thinking that Rubio's punches will knock him out once and for all requires nothing less than a deliberate suspension of disbelief.