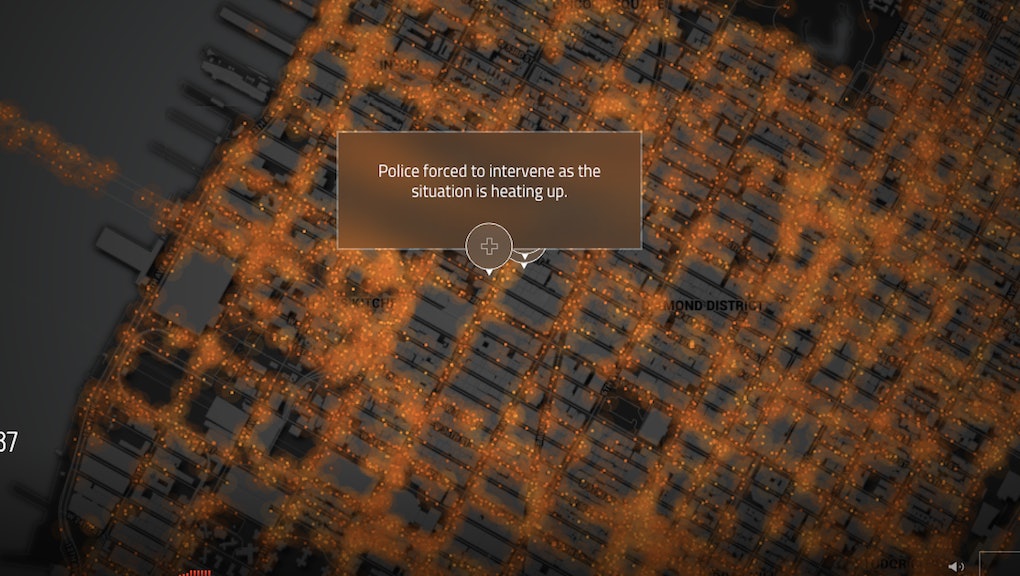 Have you ever wondered what it would be like if you became infected with a supervirus that ultimately led to the worldwide collapse of human society?

Read more: This Is the Most Terrifying Game on the Internet, and Nobody Knows Where It Came From

A new online simulator called Collapse is now making the rounds online that documents, as "scientifically" as possible, a day-by-day playbook of exactly how that might go down. Game developer Ubisoft designed the nightmarish simulation to promote the release of its latest product, The Division. The PC, PlayStation 4 and Xbox One game will be released on March 8 and focuses on how a few remaining survivors navigate a post-apocalyptic New York City, Time reported.

Collapse begins when users enter in their address at the game's starting point. I put in my current spot on Manhattan's Upper West Side. I stupidly decide to go across town for medical treatment at NYU's Langone Medical Center rather than stay local at Columbia University Medical Center.

It probably doesn't matter in the end. I infect 30 people — oops.

By day seven, riots are breaking out, hundreds of thousands are infected, people are dying. I have to buy food. To stick it to the 1%, I try and select what sounds like the most expensive supermarket.

On day nine I flee New York for Omaha, Nebraska's Eppley Airfield. Unfortunately for me and humanity, the virus spreads not just to Eppley, but all of the destinations it connects to. Bad news for the folks in Kodiak, Alaska.

Three weeks in and the world looks like a Google image of North Korea. By day 22, major nations have fallen. The death toll approaches 10 figures. The next day, it's over.

Collapse evinced a surprisingly sophisticated knowledge of local geography, and you can start from any number of possible locations. I played the game from New Jersey; Paris; Phuket, Thailand; and Scotland's Scapa Flow. In each case, I still lost and humanity was doomed.

Trying to outsmart the game by starting in Adamstown, Pitcairn Islands, or 45 Oyggjarvegur Road in the Faroe Islands or some other absurdly remote location in the hopes of giving humanity better odds is not allowed.

On my first try, I managed to end the world in just 23 days. How long will it take you to destroy humanity? Click here to play and find out!