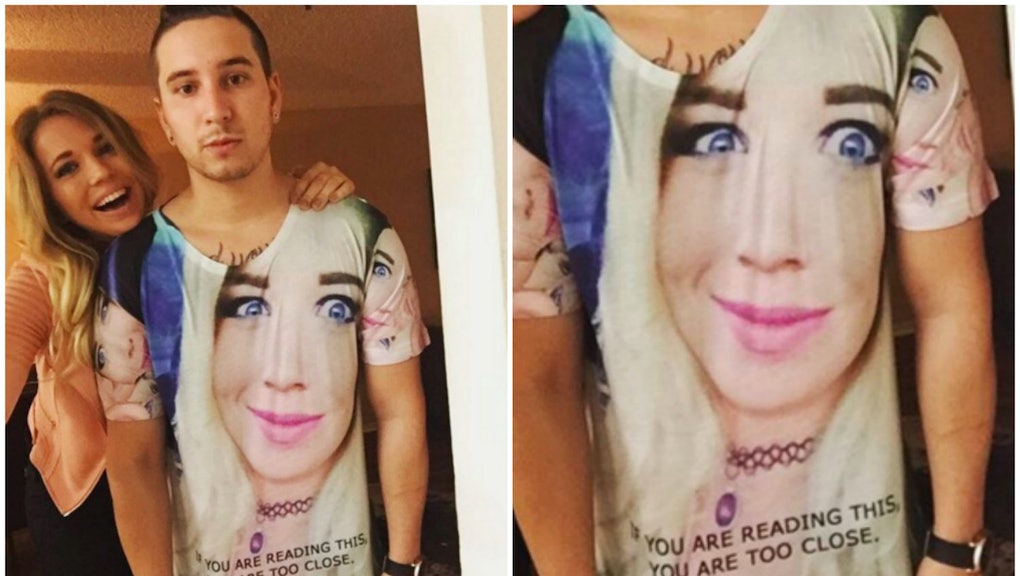 Have you ever laid back, deep in thought, and pondered: "When I'm not around, how can people know that my significant other is taken? And, more importantly, is taken by me?"

OK, maybe you haven't. But this woman has.

In a picture that has now been viewed more than 2 million times in just nine days on Imgur, designer Michelle Snyder made her boyfriend, Derek Kary, a customized T-shirt with her face printed all over it. Why? You'll want to look toward the bottom.

"If you are reading this, you are too close," it reads. "I have a girlfriend." The caption on the Imgur photo notes the obvious: "His face says more than words ever could."

According to their website PsychoGirlfriendShirt.com (a testament to how viral the image now is), the T-shirt began as a Valentine's Day gift. "[Michelle] thought a shirt with her face all over it was the best way to not only show her love, but to make sure no other girls tried to steal her man," the site says.

They're even cashing in on their viral celebrity by selling customizable versions of the shirt, currently for sale on Etsy for $50, so you, too, can make your significant other rethink your entire relationship.

According to the instructions on Etsy, after submitting your order, you simply send Snyder and Kary a picture of your face and, if inspired, your own text for the bottom of the shirt. They'll take care of the rest.

The shirt calls to mind similar attempts by men who have made shirts for their daughters to ward off young boys. In April, a father went viral when he created a shirt for his daughter that had a picture of himself, shirtless and looking quite buff, with the words "Stay clear boys, this is my dad!" written on the front. That post was viewed almost 4 million times on Imgur.

Whether you find the shirts endearing and in good fun, or cringeworthy and controlling — or both — the virality of these statement tees is undeniable.

But say you don't have a significant other or a child you want to obsessively control. Say you kinda just want your face all over this T-shirt? Well, in that case, you can absolutely go for it. Pull a Kim Kardashian, when she recently wore a leather jacket with her face all over it, and truly love yourself. (Another option: pictures of your dog, because duh.)

Otherwise, this shirt is just a golden opportunity to really make your significant other question both your sanity... and maybe theirs.