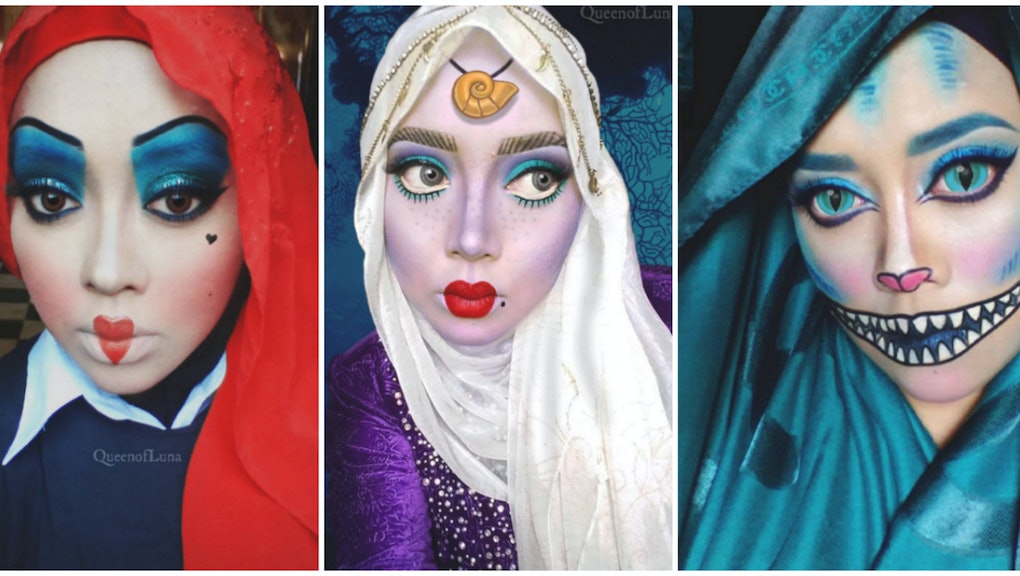 Hijabi Makeup Artist "Felt Like a Princess" With Disney Transformations

Makeup can be a very powerful thing. It can be transformative, can change people's lives and help people better understand themselves. For many, it is an art.

And in no other place is that more obvious than Instagram.

Each day, countless artists on Instagram take makeup to an entirely new and exciting level. But one makeup artist, Saraswati (@QueenOfLuna), has captured our eye as she creates stunning Disney-inspired recreations — and bucks stereotypes surrounding women who wear hijabs in the process.

"I've always been a huge fan of comic book characters, but mostly the makeup I did were my friends' requests," Saraswati told Mic. "Their requests are mostly Disney characters so yeah... but it was fun to do, I actually felt like a princess."

She also has a knack for villains.

It's not just her creative makeup that's captured people's attention, but also the inclusion of her hijab, which Saraswati, who lives in Malaysia, uses as hair, a superhero catsuit or even a mad hatter's hat.

According to her, it was just the most natural way to incorporate it into each of her transformations.

"I always tried to incorporate my hijab into them because if I only do the makeup I feel it's incomplete," she said. "So I think why not use the hijab (since I am a hijabi) as to complete the look."

What's so remarkable about Saraswati's skill is that she never even received formal training as a makeup artist, but just credits her skill to lots and lots of practice. She says that each of the looks takes about two hours from start to finish.

So while the hijab is still an article of clothing with a huge stigma around it, and one that many still think is hindering, Saraswati is changing the conversation, and showing her over 70,000 Instagram followers that a hijab isn't limiting or hindering in the slightest.

In fact, it's making these images and transformations all the more interesting and beautiful.