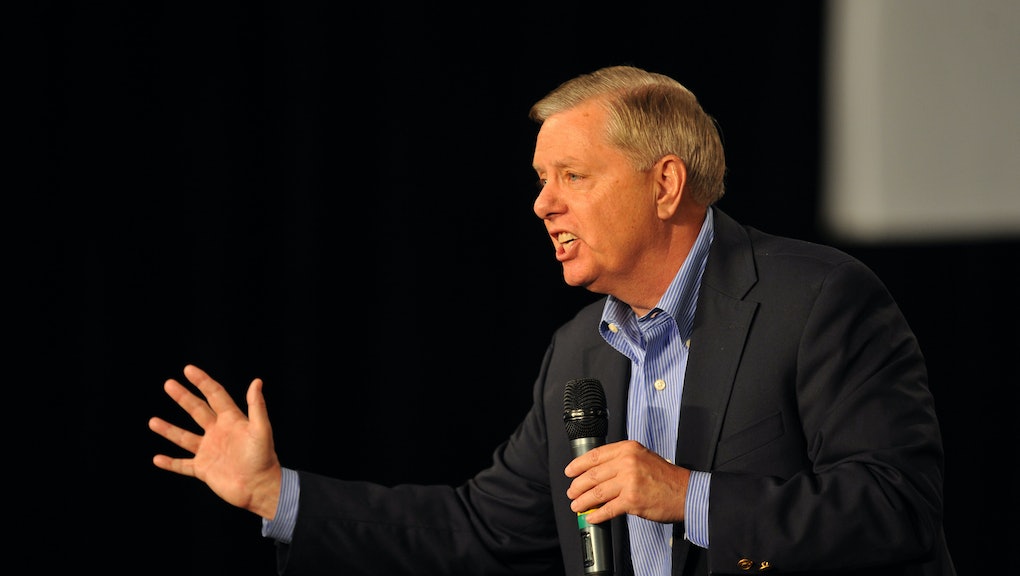 He'll put his cell phone in a blender, but Lindsey Graham isn't one to mince words.

The South Carolina senator slashed at his former rivals for the Republican presidential nomination on Thursday, saying the rise of Donald Trump shows the GOP's really lost it — and is ready to let Hillary Clinton storm to victory in November.

"How could that be? My party's gone batshit crazy," the former GOP hopeful said at the Washington Press Club Foundation Dinner even as the remaining contenders duked it out in a Houston debate.

"If you kill Ted Cruz on the floor of the Senate, and the trial was in the Senate, nobody could convict you," he snarked, referring to Cruz's infamously low standing among his peers in the Senate.

"I was asked the hardest question of my political life: 'Do you agree with Donald Trump that Ted Cruz is the biggest liar in politics?' Too close to call."

Graham — who famously tangled with frontrunner Trump, leading him to jokingly destroy his phone after Trump released his number — self-deprecatingly noted he ultimately "had to get out" of the GOP presidential contest for lack of traction.

"I endorsed Jeb Bush, and he had to get out," Graham deadpanned. "I'm the Dr. Kevorkian of the Republican primary."

Then he threw on a big white "Make America Great Again" cap.

Graham, whose departure from the primary dramatically lowered the one-liner count at presidential debates, also dissed Marco Rubio as a "boy wonder" with hydration issues and dinged John Kasich for having thanked "women who left their kitchens" for helping start his political career.

Barely able to get the words out for laughing, Graham also lobbed one at the preternaturally calm Ben Carson and his autobiographical comments about a rough youth: "He tried to kill his cousin and hit his mother in the head with a hammer. He's the one we all like."

More seriously, Graham's massive attack was an effort to wake up a GOP electorate that's buying what Trump's selling.

That joke isn't funny anymore? Trump took some damage Thursday night, particularly from Rubio, but probably not enough to change the calculus.

He's poised to continue his winning streak on Super Tuesday, leaving the GOP wondering why, if he's so bad for Republicans, they didn't move more quickly to shut him down.

Graham can be a funny guy, but even he's got to admit it: This election year, Donald Trump could have the last laugh.