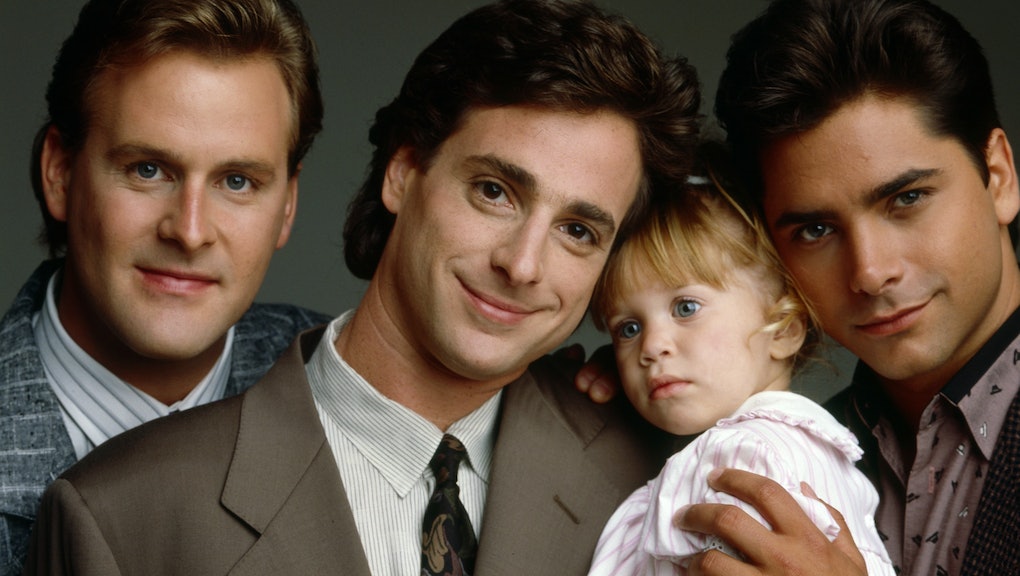 We Answered the Question: Whatever Happened to Predictability?

Are you excited for Fuller House, the Netflix reboot of the beloved '90s family TV series? Of course you are, you nostalgia-happy millennial, you! You're going to spend your whole weekend watching it, thirsting for John Stamos and making super hilarious "Cut. It. Out!" jokes on Twitter.

Yet, although Fuller House promises to answer many questions we've had for the past 20 years about the Tanner clan — did Michelle ever get her memory back? What happened to Cousin Stavros? And, perhaps most importantly, did Steve and DJ ever get past third base? — it likely won't address the main question that's been lingering in our brain cells since Full House went off the air in 1995:

While we're not the first people to take a stab at answering this question, we decided to address it once and for all. With Fuller House upon us, now is the time.

According to Wikipedia, the predictability of chaotic systems tend to deteriorate over time and can be quantified by the rate of divergence of system trajectories in phase space.

According to a survey from the Department of Agriculture, the number of people who have had milk delivered to their homes has decreased dramatically over the past 50 years, from 29.7% of consumers in 1963 to just 0.4% in 2005. Yet thanks to the advent of home grocery delivery services like Fresh Direct and Peapod, we kinda have milkmen back again. They've just expanded their food interests and they smile less frequently.

Also, the fact that milkmen are just creepy as hell. What self-respecting, middle-aged man wants to spend that much time hanging out with cows? Look at those spotless uniforms and that terrifying grin. That is 100% the smile of a man who enjoys exposing himself at county livestock shows.

The paper boy was traditionally a role reserved for teenage boys as a way to teach them about the value of responsibility and hard work to earn a dollar (or, perhaps more accurately, it was a way for kids to earn just enough pocket change to buy weed).

Unfortunately, now that the teens are too busy taking unpaid internships in glamorous creative industries and Snapping each other photos of their genitals, newspaper delivery has largely been outsourced to independent contractors. (Also, no one reads newspapers anymore either.)

We dunno what the hell Full House theme song composer Jesse Frederick was talking about here. That show literally aired in the evenings. Perhaps you should've found another wistful 1950s-esque, four-syllable nostalgia reference to use here, Jesse Frederick. I Love Lucy? "Joe McCarthy"? "Albert Coffey," the host of a late-night CBS variety show that I just made up? Let's move on!

As people get married and have kids and relocate to various parts of the country, you start to lose touch. That's just what happens in your 20s. But listen, it's not the end of the world. I mean, phones are a thing. So is Facebook. Also, do you really feel the urgent need to keep in touch with the guy who everyone called Blackout Mike in college? Remember that time he peed on your mattress? It took you months to get those stains out. The fact that Blackout Mike is no longer in your life is a blessing in disguise.

A heart, a heart and a hand to hold onto?

Look, I don't know what to tell you. We all liked Kirsten. We thought she was super nice and cool and she got us tickets to Wiz Khalifa shows through her job. Everyone said she was a keeper. It's not our fault you wigged out and jetted off to Thailand for three months because you said you weren't emotionally ready to accept someone else's love yet. So stop calling her every night.

A face of somebody who needs you?

She's dating Sean now. They just adopted a dog together. Face it. It's over.

A light that's waiting to carry you home?

We'll set you up with someone from work, OK? She's super cute and you'll like her, we promise. I don't know, she's a 7, maybe? A 9 if you're in Pennsylvania? Whatever, either way, there are plenty of other fish in the sea.

The answer to this question was unclear at press time.