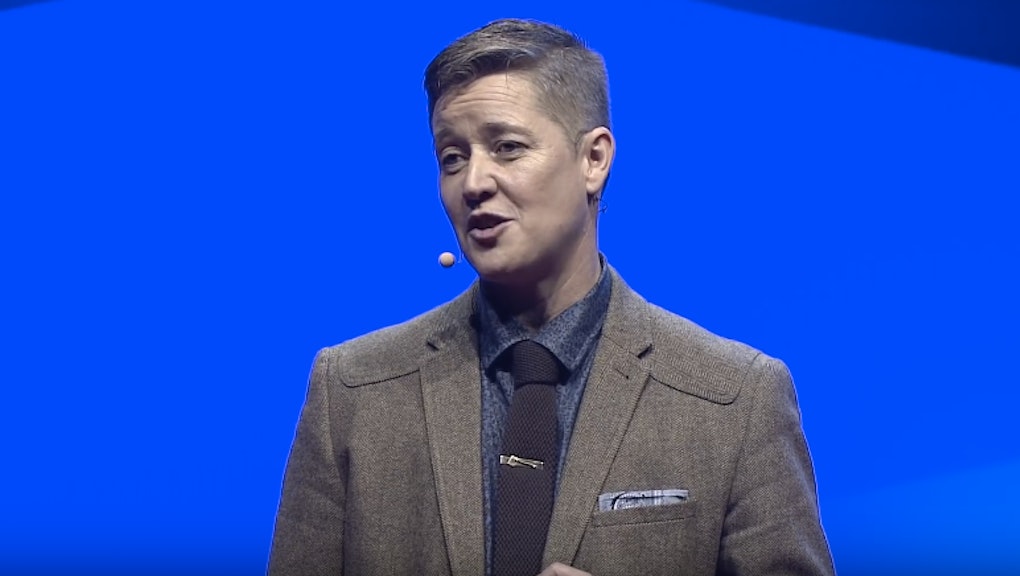 "There are a few things that all of us need," transgender writer and performer Ivan Coyote begins their TED Talk. "We all need air to breathe. We need clean water to drink. We need food to eat ... and we all need a safe place to pee."

"As a trans person who doesn't fit neatly into the gender binary, if I could change the world tomorrow to make it easier for me to navigate, the very first thing I would do is blink and create single stall, gender-neutral bathrooms in all public places," Coyote continues.

While trans people and issues have gained a significant amount of mainstream attention as of late, daily experiences of oppression — like worrying about where they're going to find an acceptable bathroom or place to change their clothes — are less publicly discussed. Yet, as Coyote noted, these common experiences often the ones that generate the most harassment.

"I've often been verbally attacked behind their doors," Coyote said of past experiences in public bathrooms. "I've been hauled out by security guards with my pants still halfway pulled up. I've been stared at, screamed at, whispered about, and one time I got smacked in the face by a little old lady's purse that from the looks of the shiner I took home that day I am pretty certain contained at least 70 dollars of rolled up small change and a large hard candy collection."

Coyote is hardly alone. One 2013 study revealed that as many as 70% of trans individuals had experienced a negative reaction when using a bathroom, according to Think Progress.

Using the legally correct bathroom could allow Coyote to avoid this treatment, but "I shouldn't have to use the men's room because I'm not a man," Coyote said. "I'm a trans person."

And yet legislators have effectively reinforced this experience by promoting "bathroom bills," which seek to legally prohibit trans individuals from using the bathroom that corresponds with their gender identity. In fact, in 2015, legislators in Florida, Arizona, Texas and Kentucky all introduced such legislation and on Feb. 16, South Dakota became the first state to pass such a bill.

Because there is "no legal or ethical or plausible way to enforce laws like these," Coyote observed, "they exist only to foster fear and promote transphobia. They don't make anyone safer. But they do for sure make the world more dangerous for some of us."

"They drop out of school, or they opt out of life altogether," Coyote said of young trans people who encounter this issue. If public spaces, like schools, aren't made truly accessible to everyone, Coyote added, then "we need to just admit that they are really only open for people who fit neatly into one of two gender boxes, which I do not."

It might be impossible to alter this reality overnight for children, like ones Coyote has personally met, who have experienced this. But perhaps we can make their lives a little better, and allow them an alternative: gender neutral bathrooms.

"We can give them a safe and private place to escape that world, if only for just a minute," Coyote assured. "This we can do. So let's just do it."