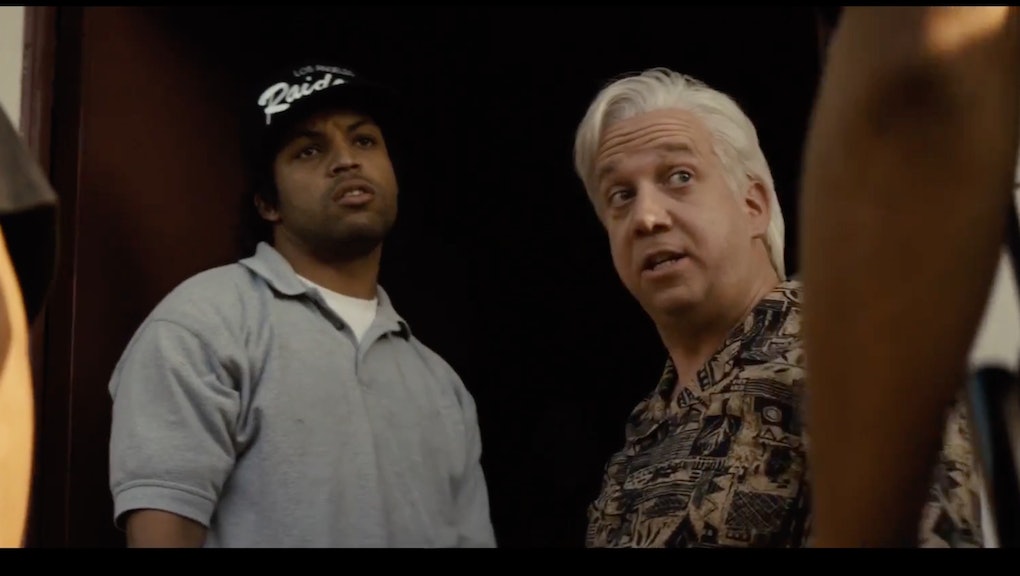 Sunday night, critically beloved film Straight Outta Compton will compete in one category at the Academy Awards. Its sole nomination was for its screenplay, written by a white guy who had no prior knowledge of hip-hop before he wrote the script.

But, can you imagine a world in which the film was more acceptable to the Academy which, according to the Los Angeles Times, is 93% white and 76% male? One YouTube user did just that. In a re-cut version of the trailer, music manager Jerry Heller (Paul Giamatti) takes center stage in the film.

He gives a ragtag group of artists a recording contract.

He lifts them out of poverty and saves them from the police.

In fact, Giamatti's character is credited in the trailer for being the one who inspires the signature phrase "Fuck the police!" When he first says it, the group objects, but then comes around to his views.

The satirical trailer actually hits on a sad reality in America. Often, in order to make films about black people, they require a white character who helps them out called the "white savior." From The Help, which depicts a white woman empowering black maids to tell their stories, or The Blind Side, in which a white woman saves a young black man's life, the trope remains in many films often invited to the Oscar circle where other deserving films are not.

A lot of "white savior" films even play with history a little bit too much. Films like 12 Years a Slave and Lincoln either have white characters who are more enlightened than the rest of the cast or, in the case of Lincoln, treat black characters like props sitting around waiting to be saved.

However, these often are the films that get nominations, showing that the black stories the Academy loves are also the ones where white people are responsible for the progress and accomplishments of black people.