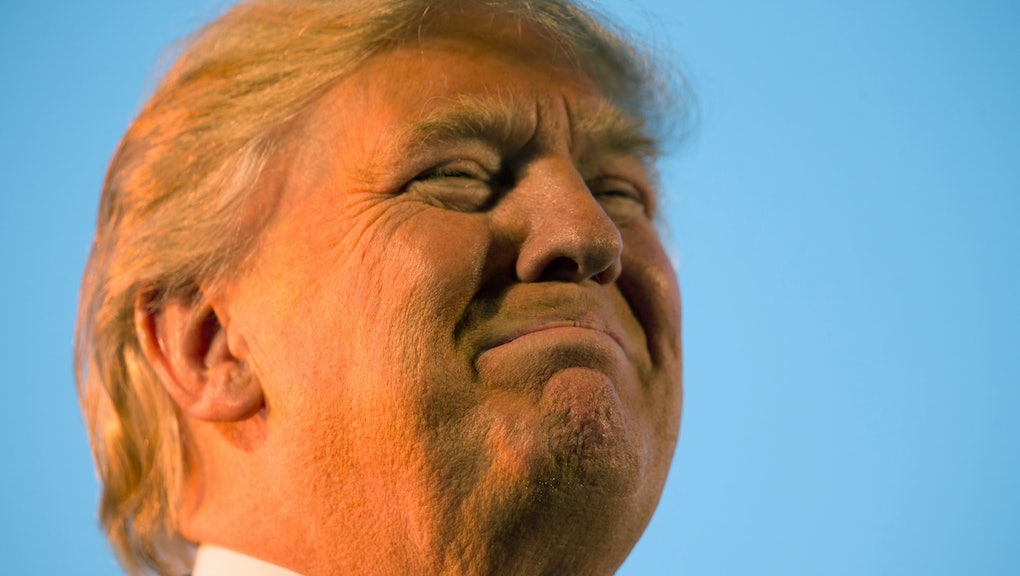 The presidential campaign of Donald Trump took yet another disquieting turn this Sunday, as the Republican presidential frontrunner approvingly posted a Benito Mussolini quote to Twitter and refused to condemn the Ku Klux Klan on national TV.

Early on Sunday morning, Trump retweeted a user named "ilduce2016" — a reference to the Italian dictator's title — who had written "'It is better to live one day as a lion than 100 years as a sheep.' — @realDonaldTrump #MakeAmericaGreatAgain."

It later emerged "ilduce2016" is an automated bot set up by Gawker, which wrote they had registered the account "under the assumption that Trump would retweet just about anything, no matter how dubious or vile the source, as long as it sounded like praise for himself."

On the Sunday edition of NBC News' Meet the Press, Trump said he knew what he was doing and even praised the fascist's word choice.

"Mussolini was Mussolini," Trump said, reported the Hill. "It's a very good quote, it's a very interesting quote. I know who said it, but what difference does it make whether it's Mussolini or somebody else?"

"You want to be associated with a fascist?" host Chuck Todd responded.

"No, I want to be associated with interesting quotes," Trump retorted.

In a separate appearance on CNN's State of the Union, Trump refused to condemn former KKK Grand Wizard David Duke or the KKK itself, saying he didn't know enough about either to pass judgment. Duke has previously endorsed Trump.

Host Jake Tapper again asked Trump whether he would like to take the opportunity to disavow Duke and the KKK.

"I have to look at the group. I mean, I don't know what group you're talking about," the candidate responded. "You wouldn't want me to condemn a group that I know nothing about. I'd have to look. If you would send me a list of the groups, I will do research on them and certainly I would disavow if I thought there was something wrong. You may have groups in there that are totally fine — it would be very unfair. So give me a list of the groups and I'll let you know."

Of course, Trump hasn't innocently stumbled into the good will of racists. Thanks to his positions on immigration, Islam and race, Trump has earned numerous endorsements and praise from groups like the far-right American Freedom Party and the American Nazi Party.

In November, he infamously retweeted doctored statistics on black crime originating from a neo-Nazi account. A later study of his social media habits found Trump tends to retweet users who follow top white nationalist accounts or use hashtags like #WhiteGenocide.

According to Time, Trump knows very well who Duke is. In 2000, he condemned the former KKK official in a statement ending his presidential bid that year.

"The Reform Party now includes a Klansman, Mr. Duke, a neo-Nazi, Mr. Buchanan, and a communist, Ms. Fulani," Trump said. "This is not company I wish to keep."