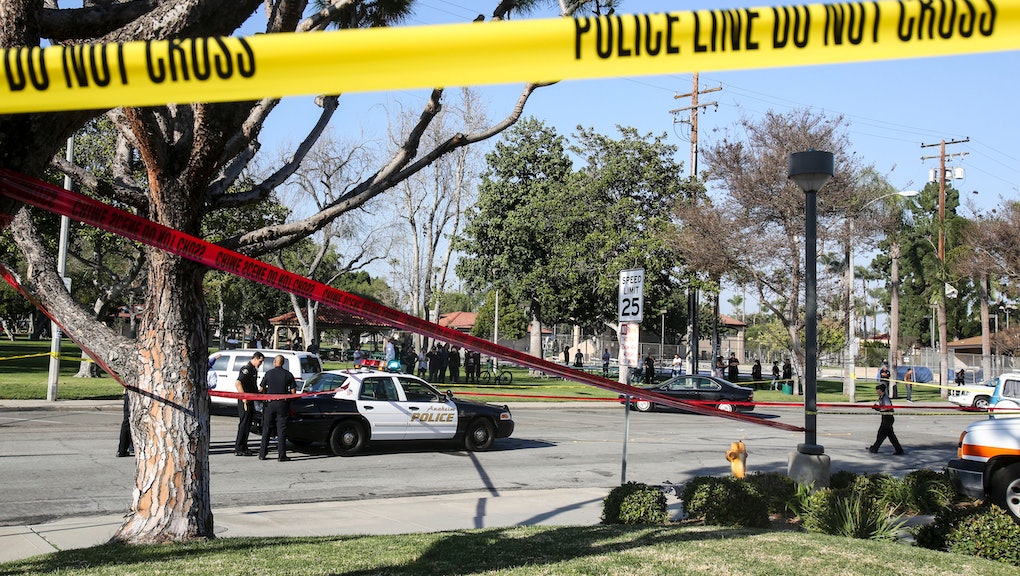 A Ku Klux Klan rally in Anaheim, California, devolved into violence on Saturday, ending with three people stabbed and 13 others arrested, according to the Los Angeles Times.

Dozens of counter-protesters arrived to protest "several men in black garb with Confederate flag patches [sic]" who were planning on conducting a demonstration at 1:30 p.m. in Pearson Park, the Times reported. Within minutes, brawling broke out as the crowd rushed towards the KKK members, and three people were stabbed — all counter-protesters, according to USA Today. One of the weapons used by the Klansmen was a flag pole.

According to the Associated Press, both sides are blaming the other for the bloodshed.

"This just goes to show how immature they are," KKK member Will Quigg told the AP. "We came here for a peaceful protest and they came here and jumped on us."

"Even if the vast majority of our community disagrees with a particular group who visits our city we cannot stop them from lawfully gathering to express their opinions," Anaheim Chief of Police Raul Quezada said. "Violence is not acceptable, and we will arrest anybody who assaults another person or commits any other crime in our city."

Graphic video of the incident posted to YouTube shows counter-protesters attacking members of the KKK group. Later, some of the Klansmen flee the scene in the vehicle they arrived in — abandoning some of their compatriots in the process.

For some of the locals, the dispute may be personal. Last year someone blanketed nearby Santa Ana, California, with KKK posters and fliers disparaging civil rights hero Martin Luther King Jr. as a "communist pervert."

The number of hate groups in the United States grew from 784 to 892 in 2015, according to the Southern Poverty Law Center, a nonprofit organization that tracks hate groups. Klan chapters more than doubled, with the total number of organized groups rising from 72 to 190.

Though some of those Klan chapters were formed as the result of the collapse of two major divisions, the SPLC wrote other chapters were "genuinely revitalized" during widespread debates on whether to remove the Confederate flag from public in 2015.

Brian Levin, director California State University's Center for the Study of Hate and Extremism in San Bernardino, was present at the protest and told the Times he saved KKK leader William Quigg from a beating by a group of people.

Levin told the paper he asked Quigg, "How do you feel that a Jewish guy just saved your life?"

The KKK was in the national news for more than one reason this weekend. On Sunday, Republican presidential frontrunner Donald Trump declined to denounce the group on CNN's State of the Union, triggering widespread criticism from his opponents.