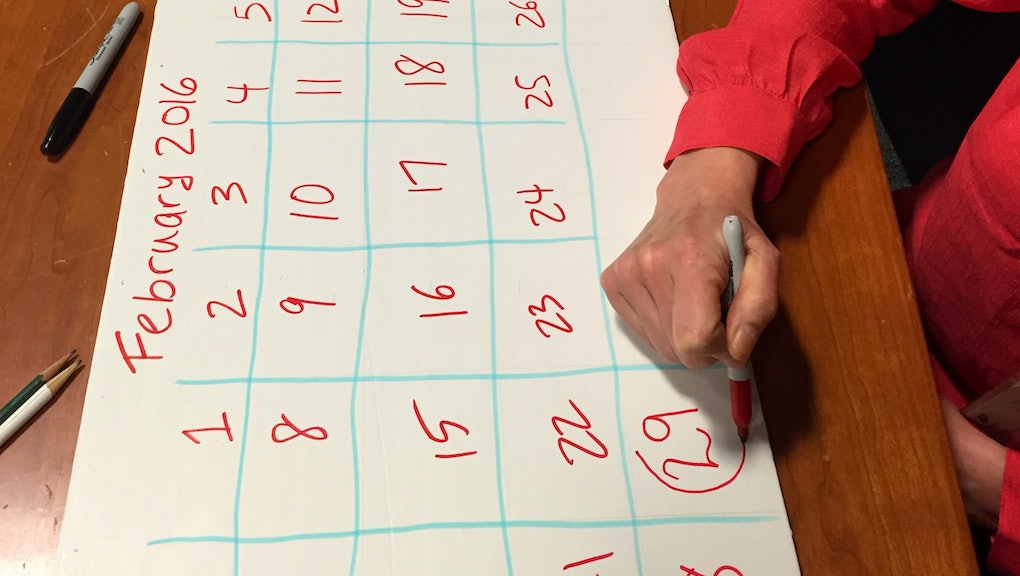 Why Is February 29, 2016 a Leap Year? Here's the Reason for the Extra Day on the Calendar

"Except in Leap Year, that's the time/ February's days are 29." As the nursery rhyme lays out, 2016 is that time, and February has 29 days instead of its usual 28. Leap years have inspired traditions and superstitions around the world for thousands of years. But, why do we have them in the first place?

If we didn't have leap years, our calendars would be out of whack. Adding the extra day helps keep our calendars in sync with Earth's orbit around the sun, according to EarthSky. Our planet takes a little more than 365 days to orbit the sun — 365.25, to be exact — which is why leap years are needed. If the leap day (as the extra day is called) wasn't added, eventually, summer months like July and August would end up being in the winter in the Northern Hemisphere, according to EarthSky.

Leap years were first implemented by Julius Caesar in 46 B.C. Before that, the Roman Calendar had 355 days. The Julian Calendar was used all the way up until 1582, according to NASA, when Pope Gregory XIII decided leap days should only be added to years not ending in "00." The year 2000 was a rare exception. Why February gets the leap day is, essentially, because a historic battle of egos. According to Metro UK, Caesar's calendar had July (his month) with 31 days, February with 30 and August with 29. When Emperor Caesar Augustus came into power, he took two days from February to add to his month August, so he could have more. Mature.

Some cultures do leap years differently than the Gregorian Calendar. Not every calendar adds the leap day on Feb. 29. The Persian Calendar only needs a one-day correction every 110,000 years approximately, making it more accurate than the Gregorian, which is "off by one day in about 3,236 years," according to Timeanddate.com.

So, what if you were born on Feb. 29? The chances of being a "leapling," as babies who are born on Feb. 29 are called, are about one out of 1,461. While technically leaplings only have a birthday every four years, many choose to celebrate their birthdays on Feb. 28 or March 1.