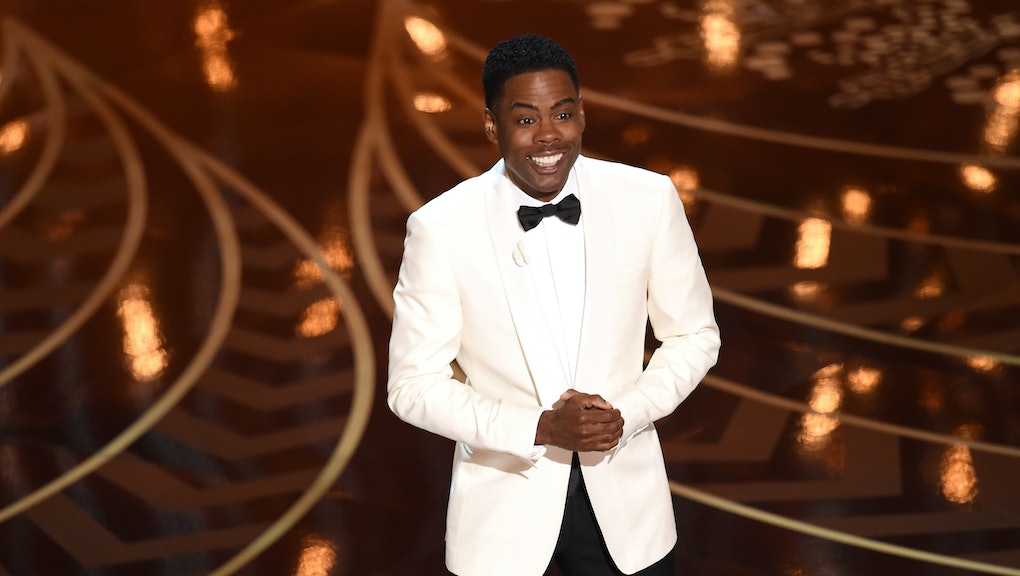 Chris Rock Offers Take on Red Carpet Fashion Sexism — Namely, That It's Not a Thing

For the past few award seasons, red carpet commentators like Ryan Seacrest and Giuliana Rancic have been criticized for focusing too much on what women were wearing and not enough on their work.

Read more: Ryan Seacrest Struggled to Ask Women About Anything But Clothes — Even When They Mattered

In response, the Representation Project launched the hashtag #AskHerMore, a campaign for red carpet hosts to ask deeper questions to female stars. While the campaign has gotten support from celebrities like Amy Poehler and Reese Witherspoon, it's also faced some critics who think it overlooks fashion's importance.

During his opening monologue at Sunday night's Oscars, host Chris Rock weighed in. According to him, #AskHerMore misses the point.

"Not everything's about sexism or racism," he said. "They ask the men more because the men are all wearing the same outfits. Every man is wearing the exact same thing."

The reason why men aren't asked about their looks, according to Rock, is because men always wear the same thing. "If George Clooney showed up with a lime green tux on and a swan coming out of his ass, somebody would go, 'What you wearing, George?'"

While others took issue with him turning a serious issue into nothing more than an easy joke...

In an ideal world, we'd have a happy medium, in which Seacrest and his peers ask a balance of both fashion questions and more intellectual questions about a celebrity's work and recent projects. Ideally, there would be space to talk about clothing when it is relevant — say, when Clooney wears a neon suit, or when an actress has a point to make about body diversity and size equality.

But during the Golden Globes in January, striking that balance seemed particularly difficult. Seacrest mostly avoided asking women what they were wearing...

instead relying on nonsensical questions...

... but overlooked moments in which the clothes might have actually been a relevant topic. After all, what if someone had a swan coming out of their ass?

More importantly, as many have noted, the fashion industry is inextricably interwoven with red carpet events, as a momentary shoutout can help designers sustain their businesses. As Racked put it, "A star can utter an unfamiliar name into the microphone and erupt millions of Google searches. Or an established house like Armani, Versace and Valentino can worm into the back of the viewer's mind, nestling there until they think about which designer they should wear to their own personal Oscars."

During Sunday's pre-Oscars telecast, Seacrest and Rancic seemed to have done their homework, asking questions about their work AND their dresses. Almost formulaically, they tended to ask the fashion question at the end for both women and men, which just about managed to strike the balance,

In the meantime, the folks at #AskHerMore have released a response to Rock's monologue:

Jokes aside, sexism is a very real issue in Hollywood. ... Representation on-screen needs to match our population before we can dismiss #AskHerMore as silly fodder. Surely at the Academy Awards, we can talk about women in ways that celebrate their artistic achievements and do not reduce them solely to their looks, beauty, and sexuality. #AskHerMore suggests that reporters can ask about the dress, but also that a woman is more than what she wears.

Ideally, reporters can ask men about their outfits too... if, y'know, men's clothes weren't boring as hell.