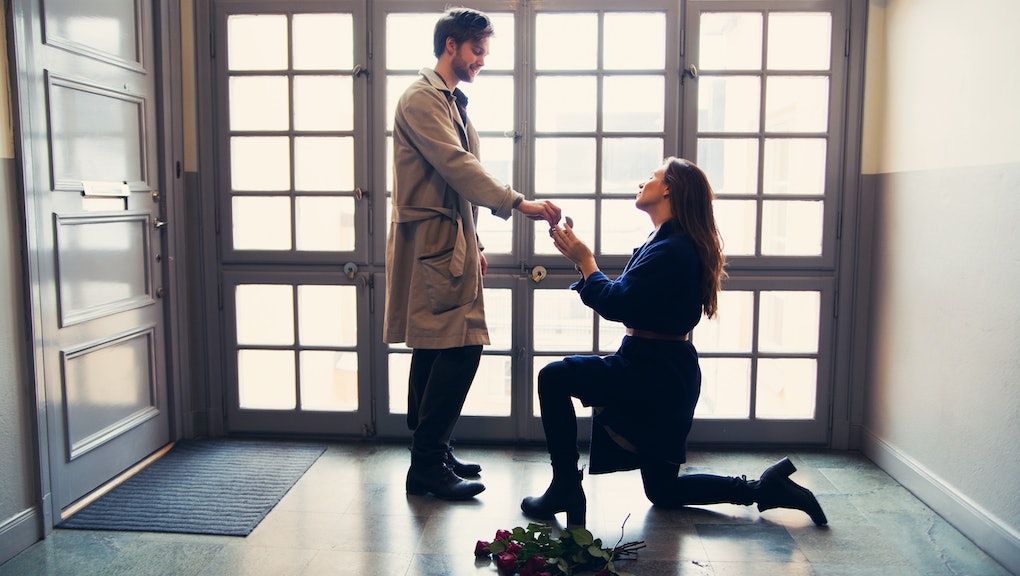 There's Still a Double Standard When It Comes to Marriage Proposals — But Why?

It's 2016. Women pay their own bills, lead their own lives and follow their own dreams. So if they want to get married, it makes sense that they'd feel comfortable proposing to their own boyfriends. And on Feb. 29, 2016, many of them will be doing just that, because 2016 is a leap year.

According to Irish tradition, Feb. 29 marks the one day a year (or, rather, every four years) when a woman can pop the question if she feels so inclined, eschewing the long-held expectation of men getting down on one knee. It's a norm that has persisted even as other cultural tropes related to sex and gender rapidly change, especially tropes related to marriage. (Who says you have to wear white, change your name or wait until after the wedding to live together, right?)

Although our conception of marriage has shifted dramatically over time, for the most part we expect men to take the lead when it comes to marriage proposals. While nearly 75% of American adults said they'd be cool with a woman proposing, only 5% of married couples said the woman took the lead in the proposal, according to a 2014 survey. Women proposing remains so rare there are rom-coms and bridal company PR campaigns about it when it does happen.

Even if women are OK with proposing to their partners in theory, they still seem to be averse to doing it in practice.

"I think it's great if women propose, but personally I can't imagine proposing to my partner," Candace*, 26, told Mic. "Part of it is definitely that for 26 years I've been conditioned to believe that men need to 'win' me and that my value as a person is related to a man desiring me."

"My partner and I talked at length about getting married before he actually proposed, so I guess to a degree we both proposed to each other," Vivian*, 26, told Mic. "Given how much we'd talked about marriage beforehand, I think it would've come off as weird or desperate if I'd been the one to pop the question. I think that speaks more to cultural stereotypes about women and marriage than it does about our own relationship."

It also speaks to the coded message of a proposal that remains even when the traditional gender roles are flipped. Even if you've discussed the prospect of marriage at length, as Vivian and her partner had, telling someone you want to spend the rest of your life with them is a pretty big deal. Because men are usually considered the less vulnerable partner in a relationship, a male-driven proposal is more significant as a romantic gesture or a show of commitment than anything else.

"Having my less-romantic partner make a proposal, arguably the greatest romantic gesture, would be... symbolic," Candace told Mic.

Portia*, 24, agreed. While she and her boyfriend have discussed the possibility of getting married, she told Mic that it won't be a concrete agreement until he shows her he's ready, as she already knows she is.

"I don't want us to get engaged until we're both on board, so I feel a proposal should come from him," she said.

Then again, a proposal can present either partner with an opportunity to make up his or her mind (isn't that sort of the point?), regardless of gender, as it did for 24-year-old Jake Link. When he received an unexpected marriage proposal from his girlfriend of six years, Link told Mic, it made him realize he was ready to be engaged.

"Something about her asking me made me 100% sure," Link said. "In the moment she asked me, I knew I wanted to marry her. I love that she proposed. Ever since Topanga proposed to Cory Matthews on Boy Meets World, I've thought it would be awesome to be proposed to by a woman."

His fiancée, Sam, said she didn't want to wait for Link to ask, especially when she already knew her own answer. "I felt that I shouldn't be subject to waiting for someone else to make a decision about my life," she told Mic, "even someone I love."

"Just because I'm a woman doesn't mean that I should have to wait on a man to initiate a major life decision," Sam added. "I'm a big believer of taking control of your own life, and that's what I did. I was ready, so I asked if [Jake] was too. It didn't matter to me who asked, it mattered that I was ready to explore that life decision with my partner, and I took the initiative to do it."

"Ever since Topanga proposed to Cory Matthews ...I've thought it would be awesome to be proposed to by a woman.."

The fact that it remains rare for women to propose, then, isn't necessarily a sign of heterosexual couples bowing to stereotypes, but rather a sign of couples trying to communicate their feelings in a way that makes sense to the two of them specifically. Additionally, as more and more couples discuss marriage ahead of an "official proposal," the concept of who should ask whom has not only gotten a bit murkier, but has started to feel retro.

As 27-year-old Erin* told Mic, "the entire idea of a proposal is some throwback to when women didn't really have any control over their lives, except one single moment to accept or reject the person who wanted to make her his housewife for the rest of her life."

Today, however, women have much more control over their romantic destinies — so much so, it can't be relinquished by a single grand gesture from a man. So for many women, the "need" for a grand romantic proposal is more of an individual preference than anything else.

That said, some women would still consider proposing to their partners — albeit under very specific circumstances.

"It would probably look more like a logical conversation than a trip to a basketball game with a question on the Jumbotron," Natasha*, 24, told Mic. "It didn't work out well for Phoebe and Mike [from Friends], anyway."

*First names have been used or changed to allow subjects to speak freely on private matters.