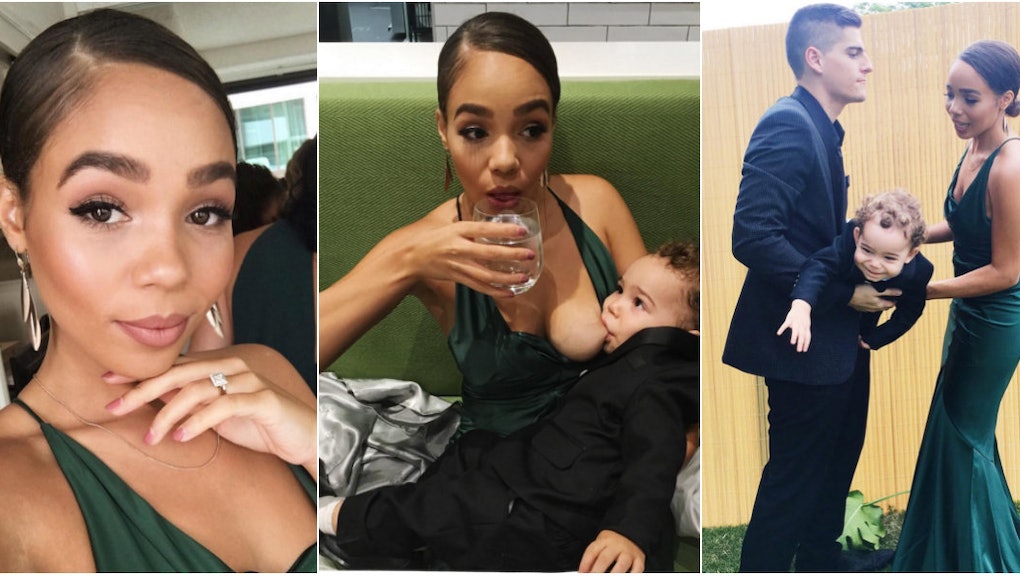 When you're in a wedding party, you spend the majority of the ceremony hoping against hope that your nip won't pop out of your dress. (In fact, that fear probably accounts for approximately 90% of double-sided tape sales nationwide.) But mom blogger Haddas Ancliffe, 21, doesn't really GAF about that. In fact, she recently posted a #FreeTheNipple breastfeeding selfie on Instagram to prove it.

Ancliffe, who calls herself Dahsi, recently posted a photo of herself breastfeeding her son Jonah at a black tie wedding. "Just me and my baby having a drink (Gotta do what you gotta do, wedding or not)," she wrote in the caption, accompanied by the hashtag #NormalizeBreastfeeding.

Ancliffe, who blogs at the website Wholehearted Honey, posted the photo a few weeks ago. Recently, however, it's started to go viral (as such public breastfeeding photos are wont to do), racking up more than 2,000 likes and hundreds of comments.

The post is gaining traction in the midst of a raging controversy over public breastfeeding in Australia, Ancliffe's country of residence. On Friday, Feb. 26, moms gathered at a public breastfeeding protest at a mall in the Australian city of Bendigo after a mother named Luci White was kicked out of the food court for feeding her son and asked by mall security to relocate to a special "feeding room."

The protest, "Boobs for Babies," was intended as a show of solidarity for White, as well as to prove that breastfeeding is perfectly normal and natural.

"It's perfectly legal," organizer Michelle Van Zyl told the newspaper the Bendigo Advertiser. "We're not breaking any laws for feeding our babies and we shouldn't be made to feel like we are."

In the United States, moms continue to get hassled for public breastfeeding, despite the fact that it is technically legal for mothers to breastfeed in public in every state. Last September, for instance, a mom was kicked out of an LA Fitness locker room for breastfeeding her 7-month-old son. (The fitness franchise later issued an apology.)

The taboo associated with breastfeeding is also present on social media. While both Facebook and Instagram technically allow moms to post breastfeeding photos, that hasn't stopped prudes from flagging the images as inappropriate, thus getting them yanked from the platforms. To combat this stigma and make the case that breastfeeding is normal and natural, moms have posted their own brelfies (breastfeeding selfies, natch), including celebrities like Alyssa Milano and Blake Lively.

While this type of exposure has helped bring attention to the #FreeTheNipple movement, it's clear that some people are still uncomfortable with moms' breastfeeding photos, as some of the comments on Ancliffe's photo illustrate. "It's cool you're breastfeeding but don't need to show it to the world. Attention whore," one person wrote.

Still, for every negative comment there are many celebrating Ancliffe for juggling the responsibilities of motherhood with wedding guest etiquette. "She did it like a boss," one woman wrote.