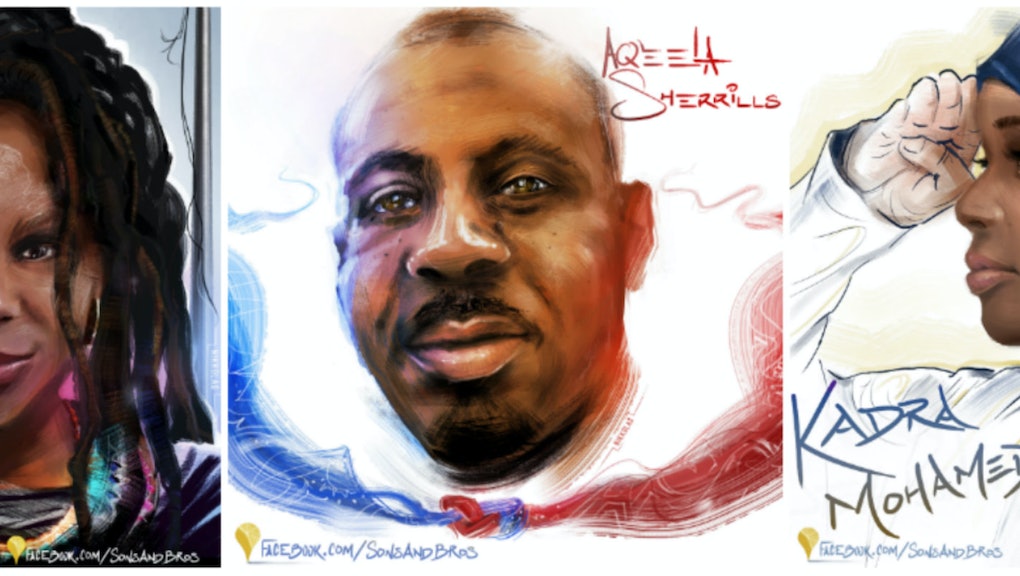 As the blackest Black History Month ever comes to a close, it's a great time to reflect on the people who will keep the spirit of the month alive all year long. The program Sons and Brothers, which works to empower young people of color and share their stories, has collaborated with artist Nikkolas Smith to render a series of portraits that celebrate everyday heroes in the black community.

Aqeela Sherrills is a Los Angeles-based peace advocate who cofounded the Amer-I-Can Program to address gang violence. Sherrills helped two rival gangs, the Bloods and the Crips, sign a peace treaty in 1992. Sherrills lost his 18-year-old son to gun violence in 2004 and has worked to reduce violence and heal those affected by violence ever since. If that's not enough, he also works as the Southern California Outreach Coordinator for California Crime Victims for Alternatives to the Death Penalty.

You might remember Bree Newsome as the Black Lives Matter activist who also holds a record for best game of "Capture the Flag." She took down the Confederate battle flag from the South Carolina State House grounds in June. Newsome is also an award-winning artist and filmmaker who has used her talents to encourage youth to vote as well as fight against racist voter ID laws in North Carolina.

Newsome said that her experience as a black woman working on horror and sci-fi films inspired her work as an activist. At a panel at Spelman College, Newsome said, "The space that exists for many of us, as a young black girl, is so extremely limited so that you really can't go very far without being an activist, without being in defiance of something."

Only 17, Meshayla Gazelle is an activist and musician who uses her talents to empower other youth to fight for equality and justice. She is currently a youth leader at the Building Bridges Camp in California and also is part of the Sisterhood Rising Leadership Retreat, where she works with women to break down systems of oppression.

A performance artist and youth activist, Nyahingha Zianni McDowell is a renowned spoken-word artist who has written about rape culture and street harassment. In one of her pieces, "How to Holla at a Woman 101," she says, "My body is not a piece of land that can be signed over with a treaty or regulated by your borders." Aside from spoken word, she is also a playwright and musician who inspires her peers to pursue their musical dreams.

Bryan Stevenson is the founder and executive director of the Equal Justice Initiative, which provides legal representation to people who were denied fair treatment by the law. His organization has gotten over 115 wrongly condemned people released from death row. You can catch his philosophy on injustice from in his 2012 TED Talk, "We Need to Talk About Injustice."

"The reason I'm even here today is because, you know, I had an idea set in my head, and I worked really hard to try to get to this dream of mine," she said. "I want to be a good role model for others, especially Somali women."

Kimberlé Crenshaw is one of the most well-known scholars in civil rights, black feminism and the law. Get this: she also coined the word "intersectionality." If there's a cause that affects black women — racist justice, education inequality, police brutality — Crenshaw has written about it. Crenshaw is a law professor at the University of California, Los Angeles and Columbia Law School.

There's a good chance that Russell Simmons is the person behind some of your favorite musicians. An entrepreneur, author, activist and philanthropist, Simmons had a hand in launching the careers of Jay Z, The Beastie Boys, Jamie Foxx, Kevin Hart and Kanye West. These careers are evidence of his passion: Giving a voice to extraordinary talent and empowering underserved communities.

A national organizer for Black Alliance for Just Immigration, Tia Oso is committed to building alliances to end racism, criminalization and economic inequality in marginalized communities. By organizing statewide campaigns to tackle these issues in Arizona, she is a testament to the fact that everyday people play a role in bringing about social and economic change.