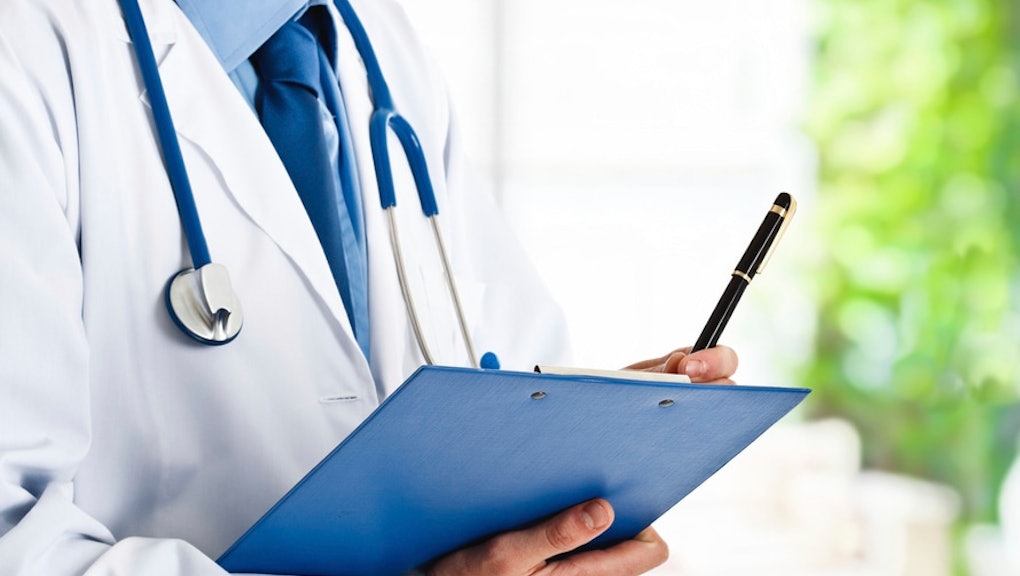 Men put off going to the doctor for a variety of practical reasons like lack of health insurance and funding. More commonly, men put off doctor visits for fear of doctor diagnosis, or irrational notions of masculinity.

According to Live Science's Jeanna Bryner, men's stubbornness toward preventative care can cut their lifespan short; men ignore their susceptibility toward fatal diseases or overlook afflicted symptoms by self-diagnosing that "nothing is wrong" and/or self-prescribe it with a machismo "I'll get over it."

Read more: Do Men Have Estrogen? Yes, and It's Critical to Their Health

1. Heart disease is the No. 1 killer of men, regardless of race.

Heart disease is an umbrella term that can refer to various ailments like coronary artery disease, heart rhythm irregularities and congenital heart defects.

According to the Center for Disease Control and Prevention, heart disease is the leading cause of death of men in the United States. Even more scary: "Half of the men who die suddenly of coronary heart disease have no previous symptoms."

Part of the problem is that men ignore warning signs, from chest pains to shortness of breath to upper body pain. The detritus of heart disease is also due to lifestyle choices: poor diet, physical inactivity and excessive alcohol consumption.

Erectile dysfunction is almost always a sign of a more serious, underlying issue – heart disease, cardiovascular disease, high blood pressure – due to the mechanics of our circulatory system. Lifestyle choices such as smoking, as well as diseases like diabetes, can damage our veins and arteries, hindering circulation.

While erectile dysfunction is treatable with medication, it doesn't alleviate deeper, correlative health issues and/or lifestyle choice that probably caused the problem to begin with.

Screening for irregularities in the testes is perhaps the one thing men can do by themselves – preferably somewhere private like in the shower. Signs of testicular issues include growths/lumps, swelling and pain.

Cancer.org notes that while these symptoms can also be indicative of infection or injury, it's important to be proactive in discerning risks early on; if the growth does turn out to be cancer, the earlier you address it, the less likely it will spread to other parts of the body.

4. Not enough men get their prostate checked.

According to Cancer.org, prostate cancer is the second leading cause of cancer-related deaths in American men. This is likely due to the fact that not enough men get their prostate checked. Or rather: men don't get screened because of the invasive methods and the stigma of penetrative rectal exams.

Hangups of masculinity aside, Healthline reported that there may be a new, less invasive and painful method toward detecting prostate cancer that involves urine analysis.

5. Too many men ignore their mental health.

Murphy argued that the tendency to seek out help might have to do with the cognitive differences between the two sexes: "She'll consider not just her feelings but also the feelings of others — her family, the children, even acquaintances, and how those people will be affected by a decision like suicide. ... A man is much less likely to take those things into account. He makes his decision, and it's about him, so he doesn't feel the need to share it with anyone else."

Regardless, social implications result in men avoiding help, even when they need it. "The classic example is asking for directions when driving," he said. "Many men refuse to do that, perhaps seeing it as an admission of weakness. They believe they are supposed to be competent in all areas. Because they are not, they are at risk."