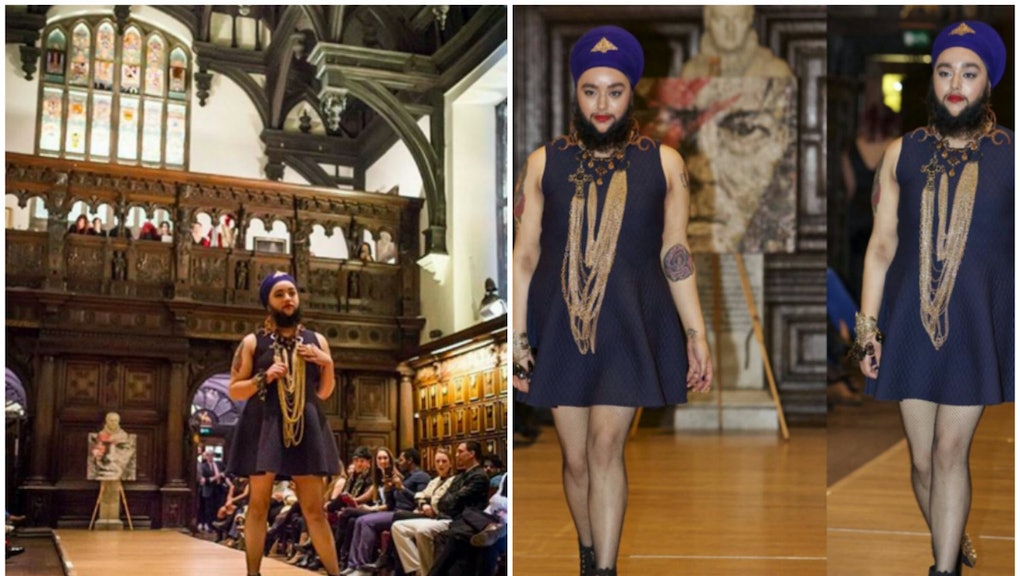 Harnaam Kaur, commonly known as the "bearded lady," is known to her over 53,000 Instagram followers as a model who's working towards a more accepting, body-positive and bully-free future. It's a future she wants after facing her fair share of bullying after sprouting a beard when she was just 11 years old as a result of the hormonal disorder polycystic ovary syndrome.

Read more: This 10-Year-Old Gets Sweet Revenge on Body-Shaming Bullies With a Plus-Size Clothing Line

After being featured in a number of stunning photo shoots, Kaur finally made her dreams of walking the runway come true earlier this month at London Fashion Week. It was a big moment for Kaur, she told her fans on Instagram, because she's long looked up to models like Tyra Banks.

"I always wanted to be like the pretty models, so I remember copying the way they posed and walked," she wrote. "I grew up being told I was too fat, ugly and disgusting to even model. I was told I'd never walk the runway."

"I used to look at models and tell myself that I will never ever be able to do what they are doing," she wrote. "I was laughed at when I said I wanted to model."

But no one's laughing anymore. Kaur walked as part of Royal Fashion Day, a showcase of luxury brands from both London and across Europe. Kaur wore jewelry designer Marianna Harutunian, rocking a long multistrand gold necklace and a heavy, intricate bracelet, along with a short navy dress.

"Jokes on my bullies," Kaur concluded.

The show was a win not only for Kaur, but also for other women who want to feel beautiful despite not fitting into the narrow characteristics of models today: white, thin, tall, blonde, hairless. Defying those stereotypes has been an essential part of Kaur's career so far. In November, she became a representative for the #EffYourBeautyStandards campaign, which aims to raise awareness of body-shaming and was made famous by plus-size model Tess Holiday.

What Kaur's presence goes to show is that not only can women like her model, but also that representation on the runways does matter. There are young girls looking up to women like Kaur or plus-size models Holliday and Ashley Graham and seeing themselves as both visible and beautiful.

Even before the show itself, Kaur was ecstatic about participating, tweeting, "In just two days, the little girl inside me's dream is going to come true."

Unconventional models like Winnie Harlow, who is 21 years old and has vitiligo, have already inspired young girls to pursue modeling career. And model Shaun Ross, who has albinism, is well on his way to doing the same, with his own hashtag campaign, #InMySkinIWin, which promotes loving yourself and the color of your skin.

Looks like Kaur is well on her way to achieving more of her dreams, and paving the way for others like her as well.