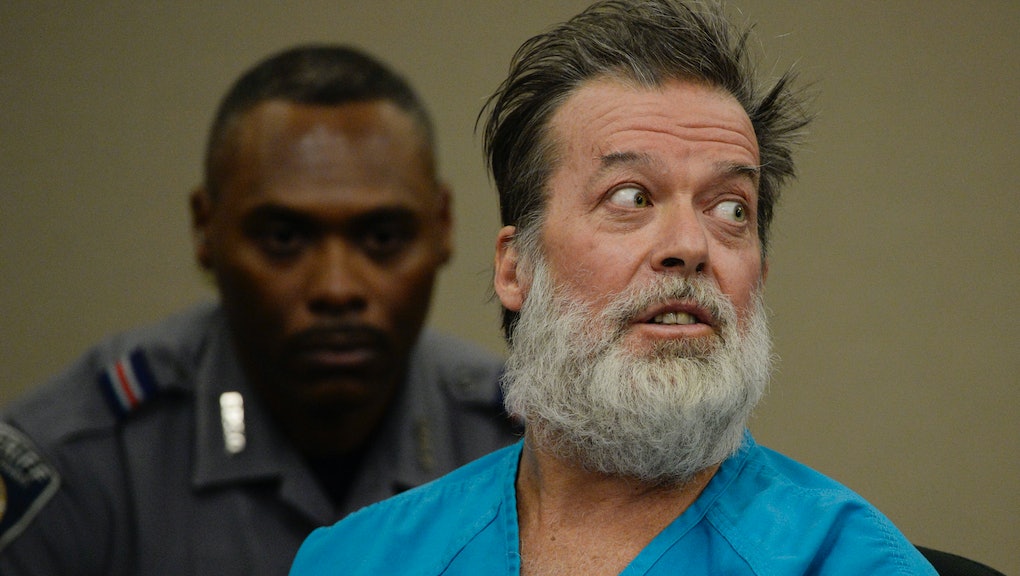 Robert Lewis Dear Jr. — the man who stormed a Planned Parenthood facility in Colorado Springs, Colorado, on Nov. 27 with an AK-47 rifle, killing three people and wounding nine others — has made clear the shooting was political.

In an exclusive interview with Colorado Springs local paper the Gazette on Friday, Dear made no attempt to defend his actions. Instead, he said he intentionally targeted the Planned Parenthood facility because it was an "evil" abortion provider.

Dear also spoke of his faith, saying his beliefs kept him from harm during the shootout. "God is in charge of this whole thing," he told the Gazette.

Over the course of the 30-minute exclusive, the Gazette asked Dear the extent of his knowledge about Planned Parenthood services ("They do millions of abortions. That's all I know."); whether he was repentant about the three people killed during the rampage ("100 million babies — their lives are over."); and the state of his mental health ("I'm not incompetent — I'm a college graduate.").

He told the paper he was also motivated by "love for a woman." He held a grudge against doctors at a nearby hospital who he said "were killing" his girlfriend, and said he spotted FBI agents following him during a trip to the hospital.

According to Dear, he left the fate of the five-hour standoff with police to a coin toss. "He said the side that faced up indicated God wanted him to give up," the Gazette's Jakob Rodgers wrote.

By Dear's own admission, the assault was broadly motivated by his anti-abortion and religious views and intended to destroy the facility's ability to provide abortions.

At least officially, then, the killings fit the FBI definition of terrorism: "the unlawful use of force or violence against persons or property to intimidate or coerce a government, the civilian population or any segment thereof, in furtherance of political or social objectives."

In the wake of the shooting, some politicians suggested the attack was not terrorism but the result of a mental health crisis, including House Committee on Homeland Security Chair Rep. Michael McCaul (R-Texas), Sen. Marco Rubio (R-Fla.) and Republican presidential frontrunner Donald Trump.

Shortly after the attack, terrorism experts told Mic no such dichotomy exists.

"We can distinguish say, a serial killer from a terrorist because the former is motivated largely by personal fantasies," Georgia State University forensic psychologist John Horgan said in an email. "The terrorist wants to be taken seriously, and wants to have some message by a wider audience. But there is a spectrum here with a lot of gray in the middle."

"There's political violence committed by people who have mental health issues as well. It's still political. It's still terrorism. The intent is terrorizing people," said Fields.

The attack occurred after a heated year of conservative political attacks on the health care provider over a series of videos misleadingly edited to suggest the organization was illegally harvesting fetal organs for profit.

The U.S. has been "seeing a lot of right-wing Republican politicians take up causes that have traditionally existed exclusively on the fringe," Ryan Lenz, a researcher for the Southern Poverty Law Center's HateWatch blog, told Mic in June. "What it does is legitimize the extremist right in a very real way."