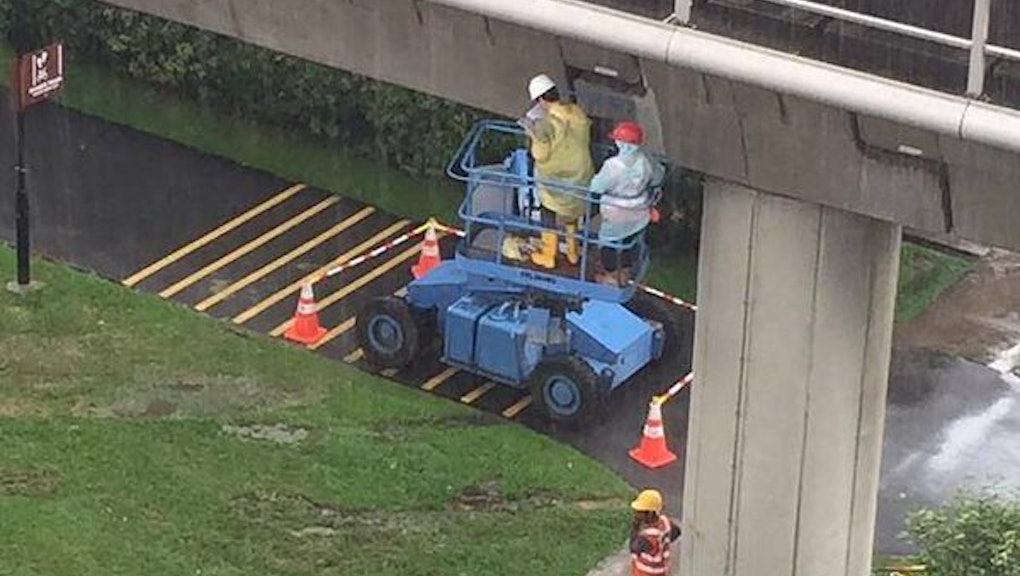 Can You Spot What the Hell Is Going On in This "Accidental Escher" Photo?

Is this the new Dress?

A reality-bending photo of two men on a vehicle by a bridge can't stop going viral. It blew up back in summer 2015 and now it's taking off again, thanks to a Reddit post on Sunday and a few tweets aggregating it.

Called "Accidental Escher," after the perspective-warping Dutch artist, the photo shows the guys apparently standing on top of a truck while also standing next to a bridge. It's impossible. It'll make your head spin. It's also deceptively simple.

What's really going on? Is it Photoshop? A cruel viral hoax? Nah, just an optical illusion.

Check it out. The machine they're standing on is a cherry-picker extending toward the camera:

One helpful Redditor sketched the angle you're not seeing:

People on Reddit are developing some alternate theories. According to Business Insider:

Some Redditors claim the true optical illusion is actually the traffic cone that appears to float above the head of the construction worker standing on the ground — but we'll let you decide which is more impressive.

The cone does appear to be floating above the man's head, like the diamond over a Sims character.

Now you've certainly got enough knowledge to explain it to your friends when they freak out, just like they did a year ago, when a dress could be seen in two ways. And you can pacify them when they bicker over how one should view the bridge photo, just like you did when a dog wore pants in two ways. The social web is a flat circle, and soon we shall be divided again.