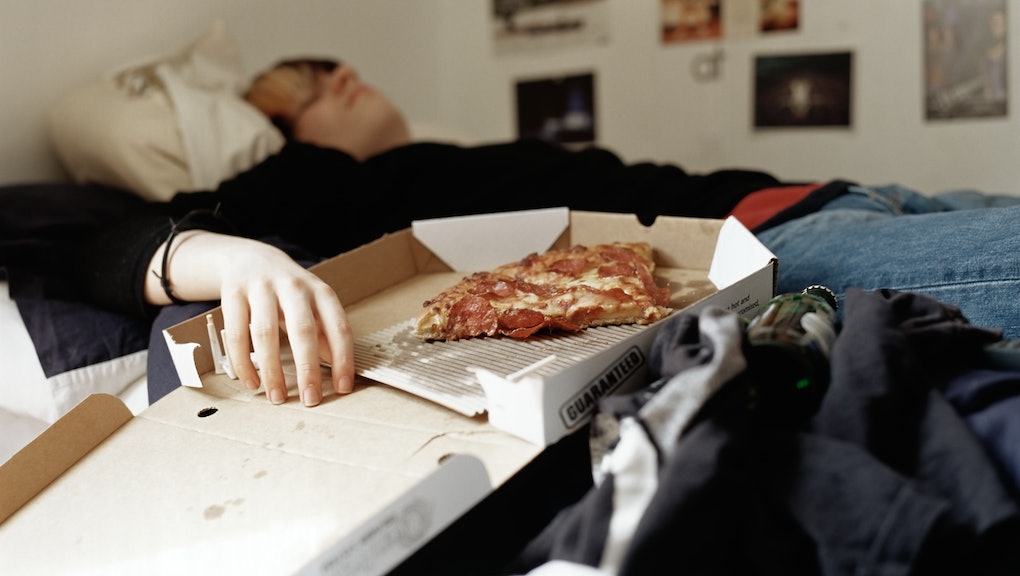 An Ode to Being a Slob, Adulthood and Instagram Be Damned

It was the bald-headed Sultan of Sorrow, Billy Corgan, who once decreed that "cleanliness is godliness," before expressing how in love he was with his own sadness.

Read more: Science Shows How People With Messy Desks Are Actually Different Than Everyone Else

OK, so maybe that phrase had been around a few thousand years before Corgan sang it, but all it takes is a singer from a '90s grunge band to drive an idea into the brains of repeat listeners. That, of course, leads one to ask: Is cleanliness in fact akin to godliness? Is slobbiness really that bad?

The slobbiness stigma: Slobbiness itself should theoretically be a badge of adulthood. Alongside a myriad of boring responsibilities, like setting up a 401(k) and saying phrases like "let's connect at EOD," you can eat ice cream for breakfast, shower with the door open and laze around in your own filth for as long as your heart's content.

Social media doesn't help things. Billy Corgan be damned, don't you miss the days before Pinterest and Instagram turned pristine living into a millennial petting zoo? Those were the days, when we unabashedly wore clothes that made our bodies look like lumpy potatoes, relished every bite of McDonald's cheeseburgers, and slowly let our rooms resemble the bottom of the trash compactor from Star Wars?

We still do that, of course. But now, we feel guilty about the indoor-versions of ourselves, obligated to hide this half of us from the rest of the world, which is especially tough considering how fun it is to craft our images on social media. It's almost as if we live this double-life where we have to pretend we don't spend days avoiding folding laundry or cleaning out the fridge, while in a week-old track suit.

Living alone — ironically, another hallmark of adulthood — can only worsen things. We all know, in our hearts, that it's probably a bad idea to spend weekends watching Netflix until sundown and making garbage angels in a dim room. It's a kind of pressure that rears its head every time you have a mental debate with yourself on whether or not having a bedside cheesecake is a viable idea.

But look around you: Are the contents of your desk currently expired and/or birthing new forms of previously undiscovered life? Are the shorts you're wearing the result of letting your pants rip into shorts? Do you have to lick Cheetos dust off your fingers to type a heated response to any or all of these questions?

The question remains: Is that a problem? Think of it this way: You could win a Nobel Peace Prize for uncovering undiscovered species, you save tons of money that by waiting until your pants rot into shorts, and, hey, Cheetos are fucking delicious. In many ways, there's nothing wrong with being a slob. You'd be hard-pressed to find anyone out there who wouldn't want to have something in common with Homer Simpson or Ferris Bueller.

Slobbiness suggests comfort. It's also a perverse a badge of honor to those who swim upstream and avoid the metaphorical bear who catches you in his teeth and tears your head off. It's a statement that you have decided to go against society's nasty pressures and do what feels right to you, even at some risk.

That badge can be found in the now all-too-common phrase "hot mess," which essentially celebrates week-old clothing, smeared mascara and a room full of Coke bottles, plus some clumsiness and bad breakups for good measure. Yet the term is used as a humblebrag of sorts, suggesting that the female-in-question has defied all odds to be as successful as they are.

There's also data out there that suggests that messiness is a sign of intelligence. Take, for instance, the Scottish biologist Alexander Fleming, who discovered penicillin by way of carelessly leaving uncovered petri dishes in his sink. If that Scottish bastard had given in and picked up a sponge, we could all be passing out judgments from an iron lung right now.

Along with Fleming, Albert Einstein, Francis Bacon, and Alan Turing were all notoriously messy men and essentially saved us all from extinction with their contributions to society.

Numerous studies have concluded the same general point about messiness: It breeds creativity. Take this survey from the University of Minnesota that tested the hypothesis that a messy desk equates to a messy mind. The study showed that "participants in a disorderly room were more creative than participants in an orderly room."

Sure, tidiness has its benefits, too — you see more of the metaphorical fine print of life when it's not covered in stray socks and dirt. But overall the unkempt life is where it's at.

Does this mean that geniuses are born from the crusts of empty pizza boxes? Maybe not. After all, you can devote a lot more brain power to a task at hand when you're not distracted with a dirty room. Still, let us revel in the messes we've created before we're forced to clean them up. Messiness is goes both ways, so finding a good halfway point between a tidy life and looking like you just walked out of a dead whale's asshole should work.