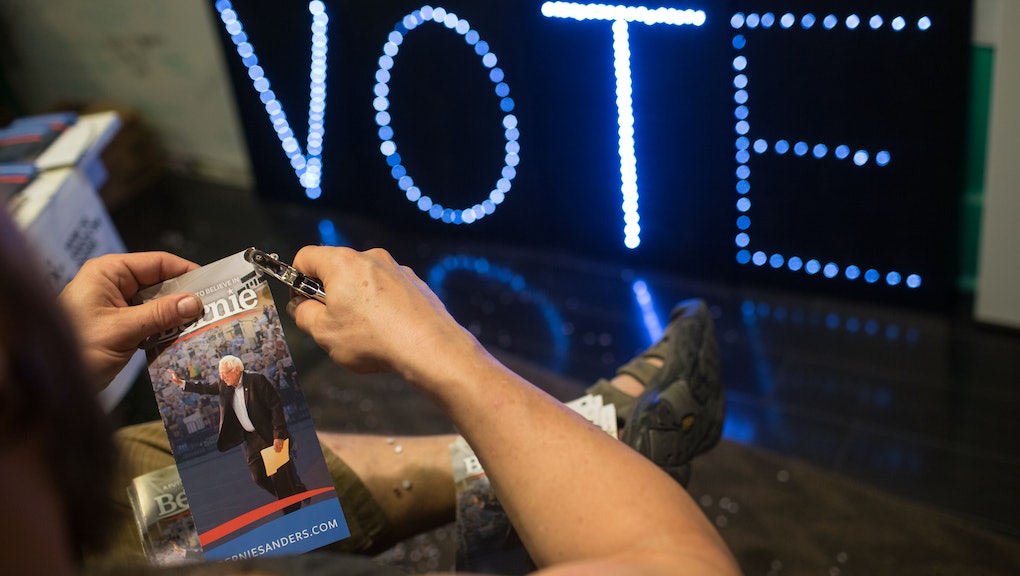 Live Updates: Voters Head to the Polls for Super Tuesday 2016

Polls have opened across the nation for Super Tuesday, the most pivotal day of the 2016 campaign to date. The day's contests are likely to bring a delegate bonanza for Democratic and Republican presidential frontrunners Hillary Clinton and Donald Trump, who polls suggest are slated to dominate their challengers in most contests.

With about 600 delegates up for grabs on the Republican side and 865 pledged delegates at stake for the Democrats, Trump and Clinton's challengers will face increasingly steep climbs after Tuesday should the day's primaries and caucuses go as expected.

Mic will provide live updates throughout the day.

And we'll be collecting returns as they come in here. Join us! — Stefan Becket

4:45 p.m.: The most-Googled question about Trump heading into tonight: "What did Donald Trump say about the KKK?"

(The answer is here.) — Stefan Becket

Retired neurosurgeon Dr. Ben Carson enjoyed a burst of popularity earlier in the GOP primary cycle — but his numbers have essentially flatlined.

On Tuesday, from the back of the pack, Carson issued a formal call for a candidate meeting — about civility — ahead of Thursday night's scheduled debate in Detroit.

Carson still has his fans, which accounts for the role he's played in any number of side dramas during this campaign season, but even his own chairman said in an interview with the Washington Examiner that the doctor doesn't "have a well-defined path to victory."

The field is waiting to see what he'll do next.

3:30 p.m.: Here's where the candidates will spend the evening.

Looking ahead to the crucial March 15 contests, both parties' frontrunners will be speaking from Florida tonight. Trump will speak to supporters from his Mar-a-Lago club in Palm Beach, while Clinton will hold a campaign event at Miami's Ice Palace Films Studios.

Rubio won't be far away. He'll be speaking at the Ronald Reagan Equestrian Center in Miami, looking to make up ground ahead of his state's winner-take-all primary, which polls show Trump is favored to win.

Cruz will be back in Stafford, Texas, where he's hoping to proclaim victory in his state's primary amid polls that show a closer-than-expected contest.

Meanwhile, Sanders will also be on his home turf, where he's expected to win comfortably tonight; he'll be speaking from Essex Junction, Vermont, at the Champlain Valley Exposition. — Luke Brinker

After South Carolina Gov. Nikki Haley blasted Trump over his refusal to disclose his tax returns and his failure to condemn ex-Ku Klux Klan Grand Wizard David Duke during a CNN interview Sunday, the GOP frontrunner took to Twitter to unload on the governor, a prominent supporter of Marco Rubio.

Trump retweeted posts from adviser Dan Scavino and campaign manager Corey Lewandowski, who flagged Haley's 2012 defense of GOP presidential hopeful Mitt Romney over his similar refusal to release his tax returns, while the candidate himself tweeted that South Carolinians were "embarrassed" by Haley:

In response, Haley tweeted at Trump with a quintessential Southernism:

Trump's attacks on Haley mark the latest chapter in the pair's contentious relationship. Delivering the official GOP response to President Barack Obama's State of the Union address in January, the governor not-so-subtly criticized Trump, urging viewers not to heed "the siren call of the angriest voices."

Trump responded by owning the mantle of anger, saying, "I'm very angry because I hate what's happening to our country." — Luke Brinker

Ohio doesn't vote until March 15, but it is a critical get for any Republican who hopes to capture the presidency. The Buckeye State hasn't picked a loser since 1960.

Trump debarked his plane in Columbus Tuesday to serve up a generous helping of red meat to primary supporters at a rally in a hangar at the airport.

He trashed his top rivals, Marco Rubio and Ted Cruz, and went after Democratic frontrunner Hillary Clinton as incapable of serving as commander in chief.

Trump also promised to defend the Second Amendment, which he said is being "chipped away at... Chip, chip, chip" and, speaking on the U.S. trade balance, told his fans, "Our economy stinks."

The billionaire businessman said if he wins the presidency, Americans are going to "win so much" that they'll actually get "bored" and plead with him to let them lose a little again — but no way. — Celeste Katz

1:15 p.m.: New voter ID laws could affect who shows up to the polls

Voters in five states today will face new rules regarding voter eligibility that weren't in place during the last presidential election. The Washington Post reports that voters in Alabama, Georgia, Tennessee, Texas and Virginia will be subject to stricter requirements that "range from asking voters to present photo IDs at the polls to requiring proof of citizenship when registering to vote." Over 600,000 registered voters in Texas lack the kinds of identification now required for voting.

The New Jersey governor dropped his own bid for the presidency after betting big on New Hampshire and endorsed Trump on Friday.

Christie and Trump headed to Columbus — home turf for another GOP competitor, John Kasich — and the Garden Stater went all in for The Donald.

"America needs strength in the Oval Office. We need to get rid of this handwringing, weak president," Christie told the crowd after Air Trump made its usual dramatic landing in sight of the crowd. "The Democrats have failed us and Donald J. Trump will help America get great again."

Christie warned that with Trump's momentum, "his desperate opponents will say and do anything to try to tear him down," and name-checked Marco Rubio and Ted Cruz.

"Washington D.C. has betrayed you, has betrayed this country. We [need] someone to go down there and turn it upside down, and that's Donald Trump," Christie said, introducing the candidate.

"We're getting ready for the biggest Washington politician of them all: Hillary Clinton, here we come."

Trump took the podium to the cheers of an appreciative crowd — and several disruptions by protesters, with the frontrunner calling "Out! Out! Out!" as demonstrators were removed.

The real estate mogul, who's poised for a big Super Tuesday win, launched into a remix of his usual stump speech in Ohio — which doesn't vote until March 15 — dissing his rivals, defending the size of his hands and bashing the press as untrustworthy.  — Celeste Katz

The GOP frontrunner may have thought he distanced himself from the support of former KKK Grand Wizard David Duke, but speaking to reporters on Capitol Hill on Tuesday, Ryan kept the issue alive.

"If a person wants to be the nominee of the Republican Party there can be no evasion and no games. They must reject any group of cause that is built on bigotry. This party does not prey on people's prejudices," Ryan, the GOP's 2012 vice presidential nominee, said as quoted by CNN.

"We believe all people are created equal in the eyes of God and our government. This is fundamental and if someone wants to be our nominee they must understand this," said Ryan, who ran four years ago with the man who's become a top Trump critic, Mitt Romney.

Trump on Sunday initially refused to disavow the backing of Duke, later blaming a "bad earpiece" and inability to hear the question on his response.

Duke went on to tell Fox News Radio's Alan Colmes in a Monday interview that he'll vote for Trump in part because he's "spoken like no other candidate in recent history."

For all his criticism, Ryan said he does plan to support the ultimate GOP nominee in November. — Celeste Katz

When ABC's George Stephanopoulos asked Trump on Tuesday morning about his his flirtation with the idea of being neutral on white supremacist backers, the Republican frontrunner said he not only disavowed them, but that he's unrivaled in his contributions to social equality.

Stephanopoulos: Are you prepared right now to make a clear and unequivocal statement renouncing the support of all white supremacists?

The Mar-a-Lago Club describes itself on its website as an "ultra-exclusive" hospitality destination that "sits royally amidst 20 valuable acres of manicured lawns, vibrant gardens and sweeping sea-to-lake vistas." Here's a picture of Trump's bastion of equality:

According to Facebook, Trump absolutely dominated the conversation on Facebook from January 28 to February 27. His name was the subject of nearly double the amount of interactions — likes, comments, posts and shares — than every other Republican candidate in the race combined. He also laid claim to about twice the amount of interactions as Bernie Sanders, and beat Clinton (who led Sanders by about 26 million interactions) by a huge margin. — Zeeshan Aleem

One of the major criticisms of the early nominating contests, especially in Iowa and New Hampshire, is that they fail to reflect the demographic diversity of the nation. Super Tuesday helps lay that concern to rest, taking place in a dozen states as far north as Alaska and as far south as Texas.

One of the key ways that Super Tuesday reflects the true diversity of the American electorate is in terms of race. A number of states, especially in the South, have large black populations, and more than a quarter of the eligible voters in delegate-rich Texas are Hispanic. — Zeeshan Aleem

8:30 a.m.: Sanders votes in Vermont — and vows to fight until the convention.

Speaking to reporters outside his polling place in Burlington, Vermont, Sanders downplayed expectations for Tuesday's contests, saying his goal was to accumulate "as many delegates as e possibly can" and reaffirming plans to remain in the race through the Democratic National Convention in Philadelphia this July.

The senator also let loose with some wry humor.

Even if Tuesday proves to be a bloodbath for Sanders — and it's conceivable that he may win only Vermont, his home state — don't expect him to leave the race. As the Sanders campaign made clear late Monday night, the senator will have the resources to compete with Clinton through the final contests in June.

The campaign announced in a news release that Sanders had raised $42 million in February — the largest haul in a single month yet for any 2016 contender. The month saw Sanders virtually tie Clinton in the Iowa caucuses and secure a win in New Hampshire, before he sustained disappointing defeats in Nevada and South Carolina.

"Working Americans chipping in a few dollars every week are changing the way campaigns in our country are financed," Sanders' campaign manager Jeff Weaver said. "Not only are we going to smash Secretary Clinton's personal goal of raising $50 million in the first quarter of 2016, our supporters are putting Bernie on the path to win the nomination." — Luke Brinker

In Massachusetts, Trump leads the GOP field by more than 30 points in polls from Emerson College and the University of Massachusetts-Amherst, with establishment-oriented candidates Marco Rubio and John Kasich lagging well-behind in a moderate state where they'd hoped to perform well. Meanwhile, Clinton leads Sanders by 11 points in the Emerson poll and three points in the UMass survey. Should Sanders lose Massachusetts — a largely white state with a strongly progressive Democratic electorate — that portends ill for his candidacy.

And in Texas, home-state Sen. Ted Cruz finds himself locked in a contest that's far too close for comfort. Emerson gives him just a 35% to 32% lead over Trump, while American Research Group gives Cruz an even narrower 33% to 32% edge. On the Democratic side, Clinton wallops Sanders by 68% to 26% in the Emerson poll, and leads 58% to 38% in the ARG survey. — Luke Brinker