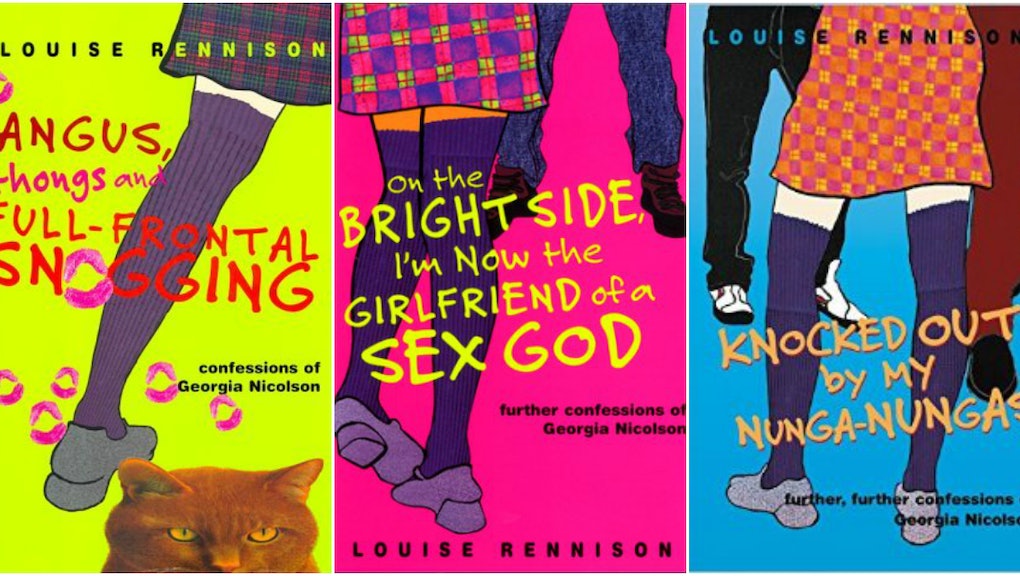 How Angus, Thongs and Full-Frontal Snogging Turned Me Into a Feminist

On Feb. 29, 2016, it was reported that Louise Rennison, author of Angus, Thongs and Full-Frontal Snogging, had died at the age of 63. Hearing the news felt like learning of the death of an old teacher — someone you hadn't thought of in years, but whose name you could never forget. And for a generation of millennial women, that's exactly what Rennison was.

In the Confessions of Georgia Nicholson series, Rennison's collection of 10 widely acclaimed and beloved young adult novels, the author introduced readers to her eponymous protagonist, Georgia Nicholson, a neurotic 14-year-old girl who is smart but, above all, average in the most relatable way.

Written as diary entries, the books are essentially a field guide to the zany inner workings of a bright, pubescent girl's mind: Georgia — who early on claims she is "very ugly and need[s] to go into an ugly home" — was and always will be astute and awkward, sarcastic and sentimental, insecure but trying so hard to just get over it.

For those of us who read the Georgia Nicholson books as tweens, the protagonist's travails were perhaps one of the first truly intimate identifications we had with literature and with the struggles of adolescent womanhood. What's more, they were also an illustration of female self-empowerment — although many of us probably didn't realize it at the time.

When my sixth grade reading teacher first handed me Angus, a chartreuse book emblazoned with an illustration of stockinged girl legs, a yellow-eyed cat and a word for kissing I didn't yet know, I was in the throes of puberty. My "nunga-nungas" hadn't yet developed fully, but I shared with the protagonist a disdain for my giant schnoz, cystic acne and absolute lack of chill. I also really wanted a boyfriend, or at least someone who wanted to full-frontal snog me.

That acute sense of "getting" the travails of young womanhood that is present in Rennison's books makes it difficult to talk about them without getting personal. Her novels made so many young teenagers like me — bookish-but-big-mouthed adolescents who also had large noses and "under-the-skin spots that will never come to a head but lurk in a red way for the next two years" — feel seen.

Georgia's diaries are primarily about boys; the character was utterly preoccupied with getting a boyfriend, and its doubtful her conversations with her female friends — known as the "Ace Gang" — would've passed the Bechdel Test. But what makes them memorable is something else: Although Georgia wants nothing more than to be someone other than herself, being who she is makes her attractive — not only to boys like her crush, Robbie, but to millions of readers who felt the same way she did.

Georgia rarely actively tries to be "real" — a key moment of the first book is when she loses a chunk of hair to a bad peroxide dye job — but her struggle to be her best self in the face of her own insecurities is eminently relatable. The fact that she spends so much time being as artificial and self-obsessed as possible underscores, ironically, the true message of the books: Being yourself is the best, most attractive thing you can be.

That's by design. In interviews, Rennison stated that she wanted to create a roadmap to independent womanhood, to teach young girls how to make up their own minds without careening into other people's desires — especially those of men.

A feminist performance artist before she became a writer, the author infused her female characters not only with the sort of uncertainty that is a hallmark of girlhood, but with honest dynamism and depth. Georgia and her friends certainly devote a lot of energy to thinking and talking about boys, but it serves a deeper purpose. They're navigating their emerging sexual desires, doing the best they can to take ownership of their urges and feelings.

"My books get young girls talking," Rennison told the Yorkshire Post in 2013. "And they talk about what they like and don't like, what they want to do and don't want to do. It's not left up to other people, particularly men, to decide."

While it would be false to say Georgia gives no fucks (she, like most tweens, gives all the fucks in the world), the character is a sort of proto-feminist, who makes no apologies for being high maintenance. Her example was one many millennial women had of what it means to live authentically, which sometimes meant not being totally authentic (i.e. perfecting a "natural" makeup look) but also being fearlessly human (i.e. wearing enormous underwear and dressing as a giant olive).

The sort of early feminism the character demonstrated had less to do with gender equality, and more to do with trying to become a fully realized human and being comfortable with your genuine self. Georgia was always the kind of girl who was going to do what she wanted to do and demand to be accepted for it; even when she wasn't, it was clear that she would be OK.

Rennison showed girls how to be themselves, through the lens of a character who was unable to do anything but speak her mind, or even realize what a weirdo she was. Georgia was flawed, and she didn't always make the best decisions. But in giving us such a deftly rendered, beautifully imperfect heroine, Rennison made it cool for us to be the same, even if that meant being different.