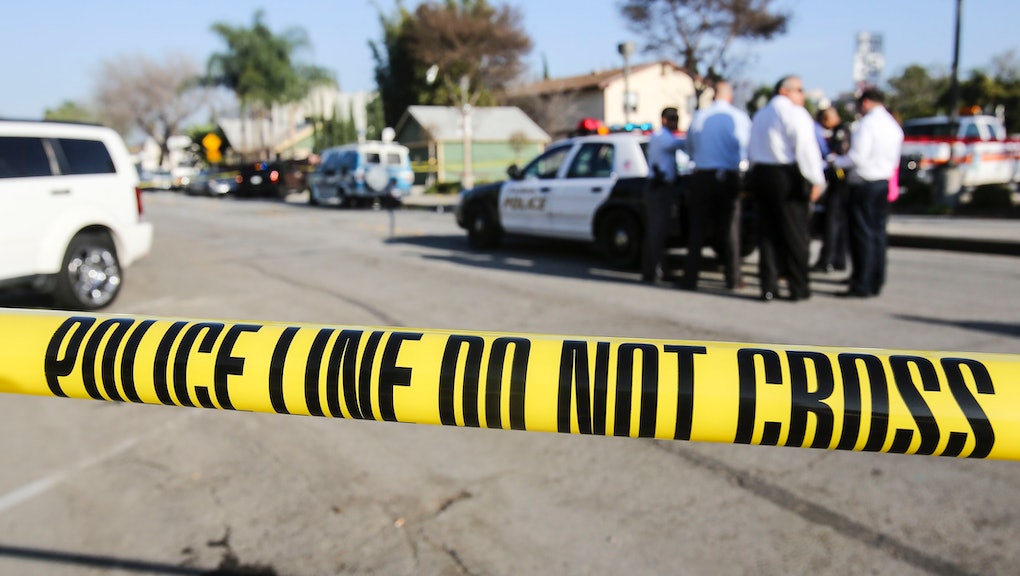 Gabriel San Román was on assignment for the OC Weekly when the group of Ku Klux Klan members parked their van outside Pearson Park. It was a sunny Saturday in Anaheim, California. Families had gathered to watch their children play in the grass, and church groups were meeting to spread their gospel and sing hymns.

A group of protesters had shown up as well: Reports of the planned KKK rally had been in local newspapers and TV stations for days, and residents of the area wanted the white supremacists to know they weren't welcome.

San Román, a 34-year-old reporter, had been on the scene since 10 a.m., waiting for the Klan to arrive. He left for a few minutes and missed their van pulling up, but when he came back shortly after, a tense and gory scene awaited him.

A man was lying on the ground covered in blood, being treated for stab wounds by police officers. Black-clad Klansmen and protesters were being arrested left and right. Onlookers were shouting. "The ambulance still hadn't taken away the guy who suffered the worst stab wounds, and another guy had his arm wrapped in a bandage," San Román told Mic.

"People were very shocked," Carlos Becerra, 22, a local community organizer who witnessed the altercation, told Mic. "No one was really there to de-escalate the situation. No police, nothing."

According to reports, a group of young people had attacked the Klan members when they arrived around 12 p.m. Part of the incident was captured in a video that shows protesters punching and kicking the white supremacists as they step out of their van. The fight that ensued was over within minutes, but before it ended, one Klansman had drawn a knife, and three people were stabbed.

The police arrived soon after. Twelve individuals were arrested, and all five of the KKK members involved were released the following day. It was later determined by Anaheim police that they had acted in self-defense. Seven of their alleged assailants remain behind bars today.

It may surprise some that this particular kind of violence broke out in Southern California. A reliable blue state with a laid-back reputation, California is likely one of the last places that comes to mind when people think of white supremacist violence or the Ku Klux Klan.

But according to the Southern Poverty Law Center, this perception hides an ugly truth: California has the second-largest number of hate groups of any U.S. state, after Texas. While these groups aren't particularly concentrated, especially relative to the state's massive population, more than one-third of them — 25 out of 68 — fall into the category of white supremacists.

The majority are clustered in Southern California — especially the region between Los Angeles and the Mexico border, which includes Orange County. "One of the reasons for this is you have these wildly different cultures here, and people not used to living side by side," Mark Potok, a senior fellow at the Southern Poverty Law Center, told Mic. "It's now a very heavily Latino region. So many suburbs that used to be white are changing pretty dramatically and have been for years."

"There was this venue in Anaheim called The Shack that was considered a hub for white supremacist gatherings and music. That was in 2000 or 2001."

In some cases, the backlash to these changes has manifested itself through violence. "This is not isolated," San Román said of the Klan's presence on Saturday. "This kind of thing happens in Orange County."

Indeed, the history of organized racist influence in the region goes back a long way. Dr. Henry Head, a former state assemblyman, beloved local physician and former Confederate soldier, was instrumental in facilitating Orange County's break from Los Angeles County in 1889, according to the OC Weekly. He was also a known Klansman: Photos published in a 1916 KKK pamphlet show Head in full Klan regalia, and identify him as "a former grand cyclops of one of the Nashville dens."

The history of white supremacy is even more flagrant in the city of Anaheim. Today it is best known as the home of the Disneyland theme parks and two successful sports franchises — the Anaheim Ducks in hockey, and the Los Angeles Angels of Anaheim in baseball. It is also notably diverse: According to Census data, 53% of residents identify as Latino or Hispanic, while 15% are Asian.

But until their ouster by voters in 1924, Klan members occupied four of Anaheim's five city council seats. Nearly 300 Klansmen lived there at the height of the group's power, and one KKK rally in the 1920s attracted 20,000 people to the city, according to the Los Angeles Times.

The group's presence in the region is smaller now, but the shadow of such organizations still haunts local residents. San Román remembers his first foray into activism as a young person passing out flyers for a protest against neo-Nazi rock bands in the area. "There was this venue in Anaheim called The Shack that was considered a hub for white supremacist gatherings and music," he said. "That was in 2000 or 2001."

Meanwhile, hate crime convictions have been on the decline in Orange County for years, but hate-linked incidents still have the potential to rattle residents. In September, a 22-year-old Iranian-American man named Shayan Mazroei was killed during an altercation with known local white supremacist Craig Tanber, in what many suspect was a hate-fueled murder.

So it's little surprise that the fight on Saturday escalated so quickly — considering white supremacy is essential to the region's historical DNA and hasn't entirely disappeared. This history is what prompted some protesters to show up at Pearson Park in the first place. At a time when Donald Trump — the leading candidate for the Republican presidential nomination — declines on national TV to distance himself from known KKK leaders and white supremacists, anxiety around Klan gatherings is understandably pronounced for people of color.

This is especially true in cities where organized white supremacy has been a force in the past. "I feel like our community is being threatened," said Becerra. "The same conditions that gave rise to fascism in Europe are happening in the U.S. with Trump. When we hear the KKK is endorsing him, and he's not denying it, that's a problem."

"Anaheim is a rich, diverse and beautiful city," Becerra said. "We don't want that sort of thing to be in our communities."