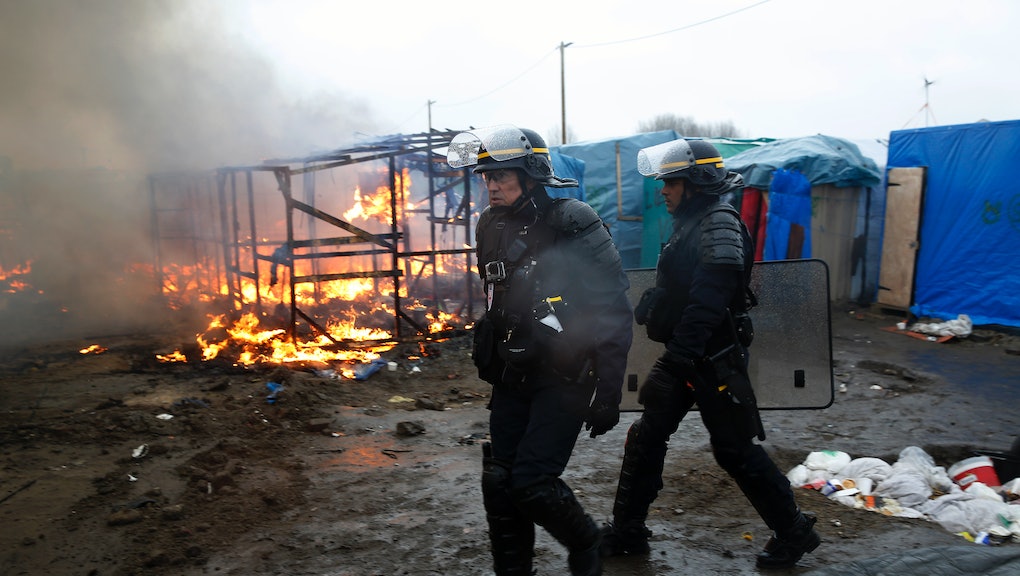 French law enforcement entered a portion of a migrant and refugee camp in Calais known as the "Jungle" on Monday with the intention of demolishing it. Resistance from residents and activists resulted in violent clashes with law enforcement, who fired tear gas at the residents, many of whom came to France from Afghanistan, Syria, Pakistan, Iran and Egypt.

The makeshift shacks were burned down both by the heat from the tear gas canisters and protesters, a spokeswoman for the organization Help Refugees, which had representatives on the scene, told the Guardian.

"The police formed a human shield preventing refugees from collecting their valuables and used tear gas to repeatedly drive back residents as they dismantled occupied and unoccupied homes," Help Refugees wrote in a Facebook post.

The Jungle houses the most refugees of Calais' migrant camps for its proximity to the United Kingdom-bound ferry terminal. Migrants have been known to hide in trucks headed to the U.K. to enter the country illegally.

In protest of the decision to eradicate the camp, refugees and activists staged a sit-in during the demolition, some sitting atop the shacks. Tensions eventually boiled over: In one instance, Getty reported along with the photo below, a woman brandished a knife at French authorities and threatened to injure herself if they destroyed the home she was protecting.

Some held signs in protest, while others simply sat, hoping to prevent bulldozers and police from tearing down their shelters.

The demolition comes after a Lille court approved the French government's request to eradicate the camp's southern section on Feb. 25, the Washington Post reports. The clearing could displace up to 1,000 people.

According to Help Refugees, authorities said they arranged alternatives for the homeless migrants, either in shipping containers converted into shelters or through transfers to other "accommodation centers." But a representative from the refugee organization told the Guardian that hadn't solved every migrant's problem: "As of two days ago there were only 140 places left in the container camp, and yesterday there was just one bus, so I'm not sure where people are meant to go."

Humanitarian groups condemned the ruling and the ensuing action.

As millions of refugees and migrants flee their war-torn countries in search of safety and security elsewhere, some have survived perilous journeys to Europe only to be aggressively displaced by their host governments.

Ginny Howells, Save the Children's UK emergency manager, told the Independent some of the tear gas used in the Jungle had affected children in one of the organization's official shelters at the camp.

"They are all just incredibly worried and anxious," Howells said. "People are dispersing into the northern part of the camps — it's really just moving the problem to other camps, which are in a worse condition."

"No one wants the Jungle to exist but until you've worked with them, don't demolish the community structures that have been built up," she said.

To get an idea of life in the Jungle before the destruction, watch the video below: