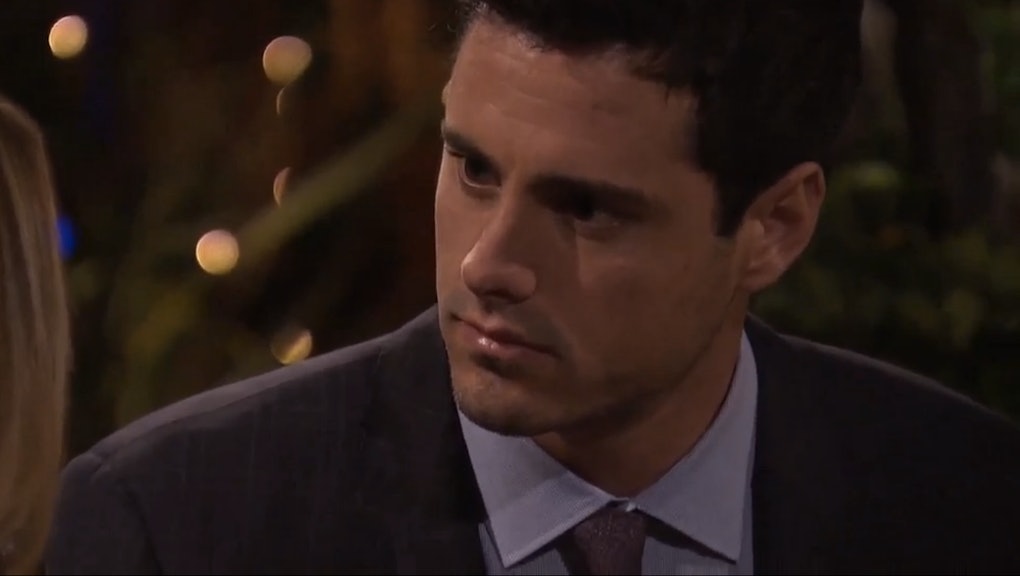 When a man is a week away from proposing to a woman, it's pretty safe to assume he loves her. And yet, on Monday night's episode of The Bachelor, when Ben Higgins reciprocated one of his potential bride's declaration of love with five simple words — "JoJo, I love you too" — people were shocked. Including JoJo herself.

"Are you allowed to say that?" she asked, her eyes wide with simultaneous joy and disbelief.

In the real world, not being "allowed" to say "I love you" to your girlfriend might seem ridiculous. But on ABC, it's an unwritten rule that the bachelor should withhold those three little words until he's safely down on one knee. And maybe for good reason. Because a mere day before Ben told JoJo he loved her, assuring her "we're on the same page," he was whispering those very same sweet nothings to a different woman.

In fact, Ben and Lauren B.'s "I love yous" were exchanged so intimately, so repeatedly, that it made viewers at home wonder if it was even worth watching the rest of the season.

By telling two women he loved them in 24 hours, Ben became the poster boy for a painfully uncomfortable lesson: Unbridled honesty isn't always what a relationship — especially a public one — calls for.

A history of love on The Bachelor: There's a strange double standard for how saying "I love you" works on the Bachelor franchise.

This declaration is usually withheld as precious weapon that should only be fired strategically, when it will have the most impact — typically on hometown dates or before the fantasy suite. This isn't to say the sentiment is insincere, but the power of "I love you" can be lost when its deployment becomes a tactical decision.

In the meantime, the bachelor (or bachelorette) comes to dates armed with elaborate metaphors instead. In season six of The Bachelorette, Ali Fedotowsky told eventual winner Roberto he made her feel like, "my heart is exploding out of my chest."

Season 17 bachelor Sean Lowe once told the Hollywood Reporter, "When you can't say 'I love you,' you have to come up with other things, and apparently the only thing I could come up with is, 'I'm crazy about you.'" (He would also tell women, "I love that you feel like that way." Oof.)

The rule might seem stupid, but it serves a purpose: Only one person isn't getting dumped, so anything that can be done to minimize pain is a good thing.

Which is in part why the ghosts of Bachelor contestants past immediately jumped on social media to decry Ben's faux pas.

Sean wondered if Ben knew what the word even meant:

The upside of withholding: It's hard to be angry at Ben, who has been honest with his emotions from the get-go and has served as a refreshing counter to hyper-masculine bachelors of yore. (*Cough* farmer Chris and Juan "eez OK" Pablo *cough*) Unafraid of shedding some man tears, the millennial bachelor has been forthright about his need for validation and open communication.

"I don't know how you can be in love with two women but I can," Ben said. "I wish there was a guide." To which the audience groaned there is! Find host/spirit guide Chris Harrison! (A "shocked" Harrison later told Parade, "If he had asked my opinion, I would have told him it would create problems down the road.")

The problem isn't that Ben seems insincere. The problem is that sometimes too much honesty can be a bad thing, especially when it sets up false expectations. Whether you agree with them or not, everyone who watches The Bachelor is familiar with the "I love you" rule — including the contestants. Thus, Ben's unprecedented declaration has probably led both Lauren B. and JoJo to think that they have it in the bag. And there's nothing fun about watching someone get blindsided.

Usually The Bachelor gets slammed for creating an unnatural set of rules for falling in love. So it's kind of ironic that we are now faulting Ben for not playing by its own arbitrary rules. This may be the one time when the members of #BachelorNation wanted the bachelor not to be honest, for once.