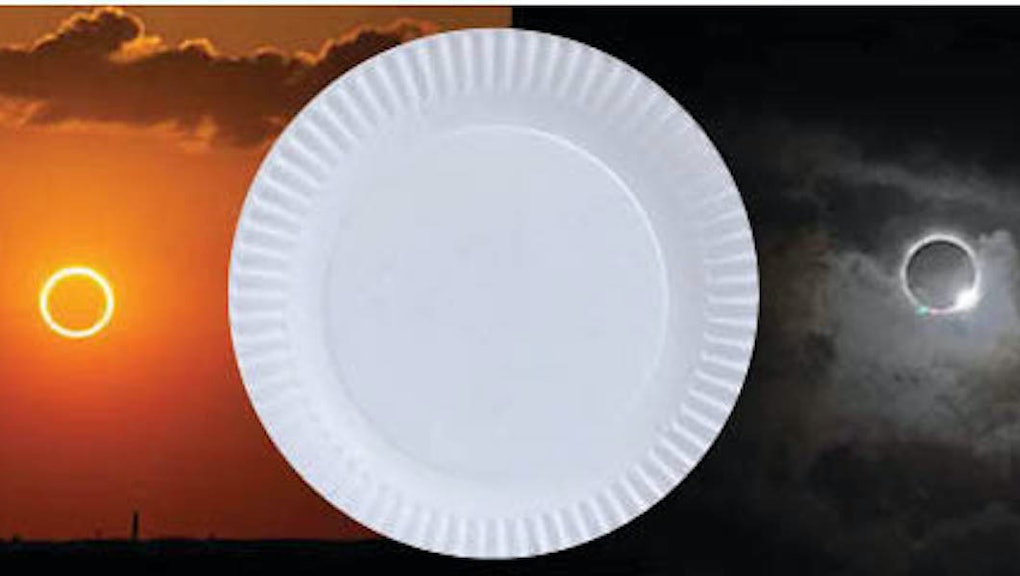 Some of planet Earth's luckiest inhabitants will get a special gift on March 9.

It's a total solar eclipse, that rare astronomical phenomenon that transforms the sun into a mere ring of light for roughly four minutes, leaving the rest of the sky dark as night.

This is pretty dope.

But — as a reminder — don't look directly at the sun. If you're without proper protection, the sun's bright rays contrasted with the sky's darkness can seriously damage your eyesight.

Luckily, all you need is two paper plates and a hole-poker to safely watch the miraculous sky show.

Here's how to create a simple DIY pinhole projector that will let you witness, without going blind, the next total solar eclipse. (You may remember this trick from elementary school.)

2. Poke a hole in the center of one of them with a tool of choice (in this case, a wine opener).

3. With your back toward the sun, hold up the hole-less paper plate directly in your line of vision and the other over your shoulder.

This should create an inverted image of the eclipse for your safe enjoyment.

This eclipse will be viewable in Sumatra, Borneo, Sulawesi, Indonesia and in the Pacific Ocean. A partial eclipse can be seen in Northern and Eastern Australia, South Asia and East Asia.

But the next total eclipse will occur over the U.S. in August 2017.

It will be viewable across the regions of South Carolina, Tennessee, Kentucky, Missouri, Nebraska, Wyoming, Idaho and Oregon, according to NASA.