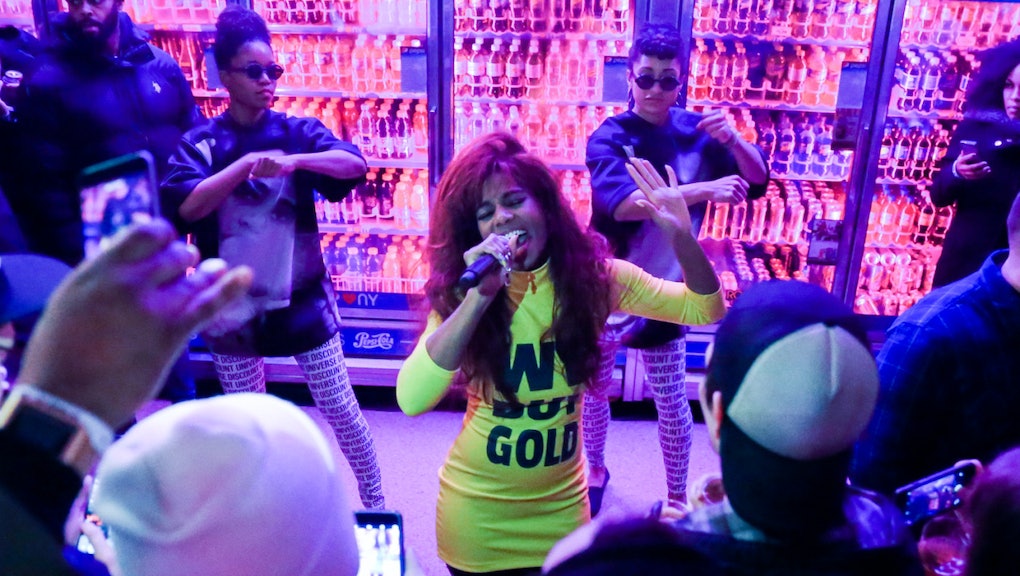 Hold these two images in your mind at once: Raoul Duke's trashed hotel room in Fear and Loathing in Las Vegas and a chipper Wal-Mart "Save Money. Live Better" commercial — and you'll be able to get a sense of the scene at Santigold's Friday release show.

To debut her latest album 99 Cents, the artist rented out a three-story, 99-cent store in New York City, in collaboration with Tumblr IRL. Around 300 people showed up to party in the neon-lit aisles to watch Santigold perform some of the album's cutting, but playful takes on American consumerism. No environment couldn't have fit her new music better.

Watching the Philadelphia-born Santi White sing in front of a glowing set of refrigerators filled with Arizona tall boys was surreal, less a musical experience than a marketing-fueled fever dream. It was as a perfect introduction to her new music as any one could hope for.

Santigold's 99 Cents is her poppiest record to date, but it's also one of her most slyly confrontational. It's extraordinarily critical of social media culture and today's "buy buy buy, sell sell sell" culture, as Santigold described it  Mic during an interview shortly before the show.

Santigold was only too happy to help Mic unpack these critiques, while offering her views on music's golden past, its troubling present and hopeful future.

I'm excited to see how you all have transformed Jack's. Tell me a little about what went into the planning?

S: First of all, this is the 99-cent store of 99-cent stores. But also the guy Jack, who owns it, was so excited about it. Whereas we approached a lot of little 99-cent stores in Brooklyn and they were terrified. They're like 'What? Party? People in here, messing up our stuff?" But Jack's like 'I don't care! I love this! Atlantic Records, what?!' [laughs] Everyone's been telling me he's the most amazing character. We couldn't have found a more ideal space.

When I heard the album's name, 99 Cents, it immediately suggests a sort of capitalist critique. Reading your interviews and commentary, it seems like a lot of the frustration is directed towards the state of music now, being disposable and cheap.

S: It's not only music. It's about hyper-consumption, and the commodification of everything. We're this culture that's all buy buy buy, sell sell sell. Everyone is constantly marketing themselves, social media allows you to create these touched up versions of your life and yourself and you sort of market yourself. That's the new model.

And then as a musician, you're very aware of how you're a product now. Instead of being an artist and just being about creating, it's like you create, but then you become this product and then you have spend more of your time selling it, selling yourself. To even get two minutes of someone's time, you have to do so much. It's just a weird place to be. I didn't become an artist in this era, and it's just a weird culture to transition into as an artist.

If you were starting out in this day in age, what do you think would be your biggest challenges? Do you think you would have become a musician?

S: I don't know, that's a good question. What I was drawn to about music as a kid was first of all the experience of buying music. I loved going to record stores and looking through stacks. I love the artwork. I love lyrics. That was one of the main things that inspired me to become a musician: lyrics. And most of what I listened to had a message, whether it was reggae, some Steel Pulse, or Joni Mitchell, or Jimi Hendrix, or Devo or even Morrissey.

Even hip-hop back then, you had Public Enemy and De La Soul. Everyone was talking about something. That's why you made music.

If I was to come into [music] now — I don't know. That's definitely not the prevalent trend in music. There's not as much cultural commentary; there's not that much work put into the album covers; you don't go to the store and buy it. So I don't know that I would've chosen to be a musician now. I could create so many different other things across different mediums. I probably would still make music in some way because I love it, but being a musician? I don't know.

"I've walked into sessions with producers who aren't used to working with people like me. I'll say I want to change this and they say 'No,' and I say, 'OK, well that's the end of that."'

Do you hold out hope that this kind of music with a message will return?

S: I think it will. I think that's the nature of the pendulum effect and how culture regenerates. We crash and burn and we rise up again. I'm trying to be consistent throughout and stick to the integrity to my art, no matter what the climate.

One thing I've always been impressed with how many different sounds and styles you're able to bring in record to record and still keep it feeling trademark Santigold. What do you always make sure is always there? What makes a "Santigold record" in your mind?

S: It's the way I'm able to hold it together. It's the sensibility. You've got to color each song with the unexpected. It's like when you're doing a painting and you're trying to balance the composition and there's too much red up in the left corner, so you put a dot over in the right-middle. It's just balance. I approach it like a painter.

This has been a big conversation lately: the lack of female producers, engineers and songwriters, especially in big mainstream pop. You're not operating at the level, but I see you're working with some people who are, like Rostam Batmanglij and Patrik Berger. Is this disparity between men and women behind the boards something you've noticed? How have you dealt with that?

S: Yeah, there's really not that many female producers. The female producers I know work on their own stuff mostly. People like me or like Grimes or people who are hands on with their own music but don't go around producing for others. It's a very male environment.

For me, I'm so hands on with my own process, I only invite in people who I want to work with, and then I'm so collaborative in the process. It's a different situation than walking into the "music factory," where you've the producer coming in with the songwriter — no artist present — taking pop hits to the labels where they say, "Here are your songs. Go sing them."

I've walked into sessions with producers who aren't used to working with people like me. I'll say I want to change this and they say "No," and I say, "OK, well that's the end of that."

At the end of the day, I don't have to put up with that, because I can do it myself. A lot of performers don't feel confident bringing ideas to fruition.

Have you ever been tempted to write for an artist in a music factory setting?

S: Totally. But it's a full time job, because you have to write so many songs before they'll take something. It's just a different kind of work. It's kinda like painting by numbers. It's not as easy as painting by numbers, but it's such a formula. It doesn't really engage the muscles I like to use when I'm writing.

It does take great skill. There's people who do it so well, and I would never take that away from them. But it's not my skill.

What is the main thing you hope people take away from your record? What kind of reaction from a listener would signal to you that your record was a success?

S: I always like my music to inspire people to self-reflect, to value art and craft, to see society and culture as almost a mirror, so they can see how things might want to change and how they can participate in that change. I want people to feel good and feel connected.

I hear so many people say, "Oh your song saved me, or made me feel this when I needed it." Even a friend of mine the other day was like. "I'm gonna go home and listen to your record and cry." I was like "What? Why?" [laughing]. And she's like "I don't know, it just brings up so many emotions and I need to get a bunch of stuff out." That's the special thing about music. Any way it can help music people alive, connected, inspired, called to action or self-reflective, those are all great outcomes.