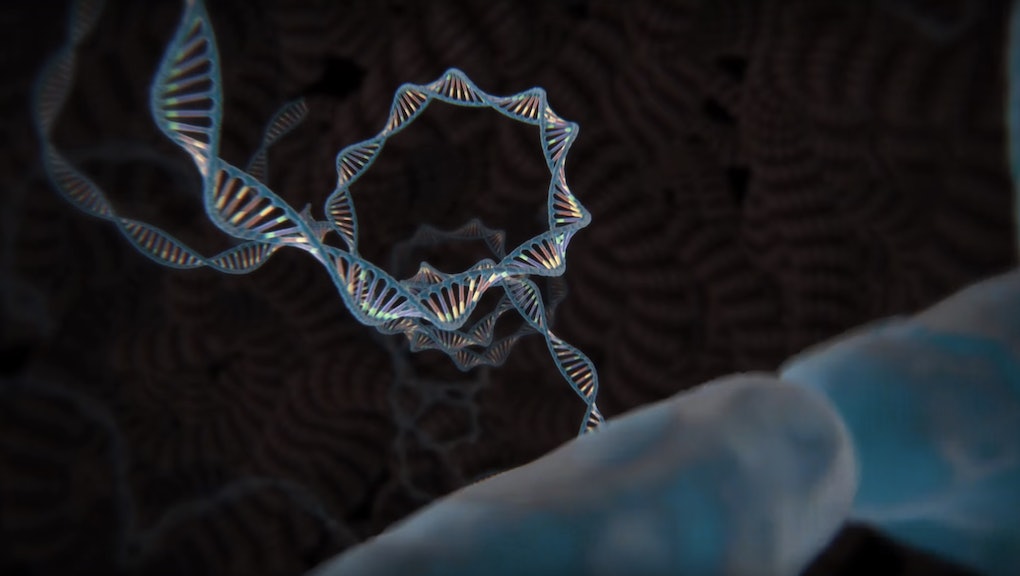 A Beginner's Guide to CRISPR Gene Editing, the Biggest Scientific Breakthrough in Years

On March 9, proceedings begin on a billion-dollar patent fight over who owns CRISPR, the Beyoncé of gene editing techniques, and with that decision could come the fate of modern biology.

The patent decides who controls the rights to use CRISPR, and how. The stakes are high: CRISPR is arguably the most groundbreaking scientific advancement of today, showing results in treating muscular dystrophy, bolstering staple crops and modifying human embryos. A recent report predicted it will be a part of a $9.22 billion medical industry in 2022.

There's so much hype around CRISPR, and yet it's tough to overstate its potential. It's not ridiculous to say that it could dictate humanity's future within a few years.

But first, to understand how important this gene editing technology could be, we need a crash course in CRISPR.

CRISPR stands for "clustered regularly interspaced short palindromic repeats" — basically, a scientific way to describe the structure of the DNA. Applied in a clinical setting, CRISPR allows scientists to directly and precisely modify or correct mutations in our genome by going in and "cutting" the genes with an enzyme called Cas9 — which is why you'll often see CRISPR referred to as CRISPR/Cas9.

OK, so what else can it do?

CRISPR doesn't always have to "cut." A bioengineering professor named Stanley Qi discovered the Cas9 protein could be used as a kind of dimmer switch, allowing CRISPR to control what genes do by sending them what you might call genetic messages.

So, say you have a bunch of cancer cells that keep replicating because they aren't responding to the body telling them to kill themselves (these messages are called death cues). With CRISPR, you can target the cancer cell, turn up its ability to respond to death cues and turn down its ability to grow quickly, according to Marie La Russa, a Ph.D. candidate in Stanley Qi's Lab at Stanford University.

"Think of genes as a mini-factory with various levels of activity," La Russa told Mic. "You send the genes messages with the dead Cas9, saying things like, turn up production if it's too low or turn down if it's too high."

CRISPR/Cas9 can edit a gene, kill a gene, cut out a crappy strand of DNA and replace it with another one, tell a gene to work harder or tell it to stop being a murderous asshole. It's not like genetic modification, or gene therapy, which is just taking genes from another species and adding it to the existing genes in hopes that the new genes will operate better than the faulty ones.

"It's like you have a flat tire on a car," André Choulika, CEO of biopharmaceutical company Cellectis, told Mic in February. "Gene therapy is putting a fifth wheel that would allow you to move the car. Gene editing is replacing the flat tire."

Where CRISPR came from

CRISPR wasn't just invented in a lab a few years ago. The mechanism was found in nature, and only recently has it been adapted for lab use.

Discovering its real-world applications kind of happened by accident, after, in 2012, researchers like biochemist Jennifer Doudna began to see bacteria's CRISPR immune system as a "programmable DNA-cutting enzyme."

CRISPR is best known for being a microorganism's protector, defending the host from invaders. It lives in genomes to store invading viral DNA.

Think of it like a war. As Carl Zimmer described it, when a bacteria encounters an intruder virus, the microbe turns the Cas9 protein into a precision-guided weapon, going directly to the virus' matching genetic material and blowing it up. It's your body's version of advanced warfare. Only recently did researchers figure out they could throw those CRISPR/Cas9 cells into a petri dish and edit them to do specific tasks, like attack cancer-causing gene mutations, instead of whatever they would do in the wild.

Picture a cancer cell in the body. It's replicating exponentially, creating a tumor while the immune system fails to hamper its progress because the death cues weren't triggering the other cells in your body to tell it to die. CRISPR/Cas9 can target that problem-child gene and tell it to listen to its neighbor cells, accept its death cues and self-destruct.

For example, consider the HIV virus, incubating quietly in the genome before resulting in the development of AIDS. CRISPR/Cas9 could target HIV's DNA hiding in your genome and snip it out.

Or some billionaire could try to edit a horse genome to make a freckly ginger-haired unicorn, because screw responsibility in science.

The point is, gene editing could open the door to a lot of different medical and wacky applications, especially because CRISPR is fairly easy to use. You don't need a ton of money to attempt some less, er, applicable experiments. At least, that's according to Dana Carroll, biochemistry professor at the University of Utah.

"It's democratized genome editing because now it's really easy to do," Carroll told Mic. "The concept is as easy as editing a Word doc, but you actually need to be in the lab with some basic skills. In my lab we prefer CRISPR technology because it's very easy to employ, very cheap and in order to make it work all you have to know is the Watson-Crick base pairing rules."

CRISPR/Cas9 has a lot of potential as the go-to gene editor for genetic research, but its earliest research papers are, like, five minutes old.

And like other gene-editing methods, it isn't anywhere near ready to do trial edits on the human germline.

Those modifications aren't only unpredictable — the current best success rate editing a short stretch of DNA was 60% — but also, they're heritable, meaning unknown genes could be passed down to future generations. Your great-grandchild could have a horn, a third eye or a mutant case of male-pattern baldness. We just don't know.

So it's better to cool it with the talk about super-babies until we've at least introduced CRISPR to a living, breathing human being's germ line.

In the coming months, with the ownership of CRISPR still undecided, you're going to start seeing more about the life-changing and Nobel Prize-deserving therapies of a technology that's hotly contested in the biology community. But here's something to remember: While the technology is really exciting, sometimes we have to pump the breaks on our own optimism — not to hamper creativity and the drive to improve, but to know where we really stand.