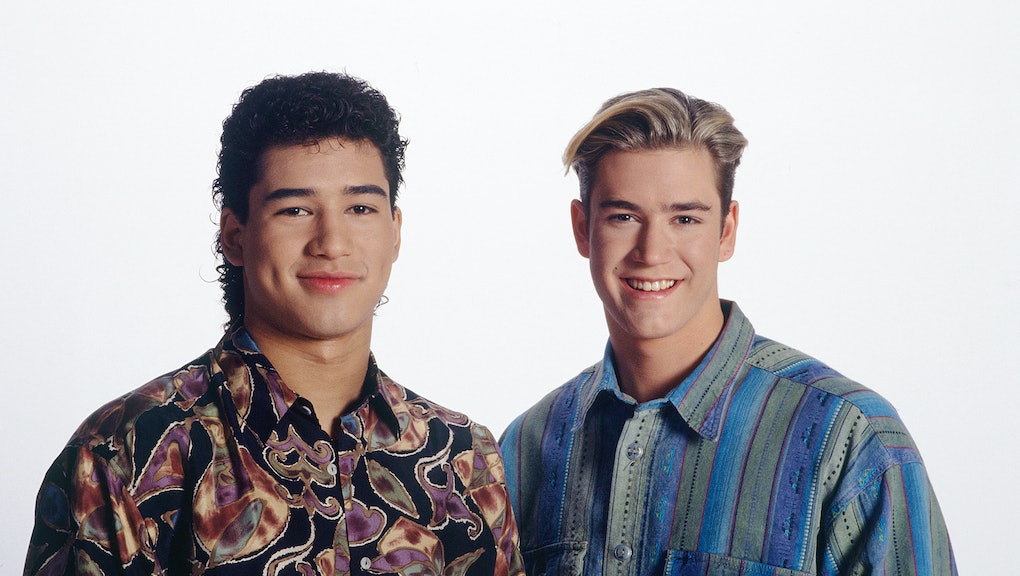 The '90s were a dynamic time for television. The decade was not only a fun era before smart phones, social media and YouTube, but a time where TV series were arguably at their best. With shows like Saved by the Bell, Buffy The Vampire Slayer and Full House, Americans were glued to their TV screens.

More than two decades later, fans can look back on some of their favorite '90s television shows on the movie and TV streaming service Netflix. No matter if you watched the following shows when they first aired during the '90s or if the titles are new to you now, here are some great '90s TV shows that really captured the decade.

Read more: 8 '90s Nickelodeon Shows That Defined Your Childhood and Shaped the Person You Are Today

Saved By The Bell

Saved By The Bell, one of the best television series of the early '90s, is available on Netflix. Starring Mark-Paul Gosselaar as Zack Morris, Dustin Diamond as Samuel "Screech" Powers and Lark Voorhies as Lisa Turtles, the Saved By The Bell cast produced a host of memorable characters during the four TV seasons. The sitcom, which aired on the NBC network as a Saturday morning series, followed the lives of several high school students at Bayside High School in California.

"Bayside High is the locale for loads of fun, romance and even a little education for a group of devoted friends — Zack, Kelly, Slater, Jessie, Screech and Lisa — as they navigate through the highs and lows of adolescence," the Netflix plot summary reads. The show was also nominated for a Daytime Emmy for outstanding achievement in lighting, according to MTV.

The '90s television series Buffy The Vampire Slayer propelled actress Sarah Michelle Gellar to stardom during the era. Gellar plays the titular character Buffy Summers, a teenage "Vampire Slayer" who must fight against, of course, vampires and other various forces of evil. The Emmy award-winning show was listed in Time as one of the "100 Best TV Shows of All Time."

The Netflix summary states: "Despite her desire to live a normal life at Sunnydale High, tough-as-nails teenager Buffy Summers fulfills her mystical calling as a Slayer by protecting humankind from vampires, demons and other malevolent supernatural creatures."

The X-Files was one of the greatest sci-fi television series not only of the era, but arguably one of the greatest of all time. Starring David Duchovny as Fox Mulder and Gillian Anderson as Dana Scully, the duo appear in the series as FBI special agents sent to investigate the paranormal: the existence of aliens, monsters, ghosts and other supernatural activity.

"Tracing both their personal and professional lives, this award-winning Fox series centers on FBI agents Scully, a skeptic, and Mulder, a believer, and their efforts to uncover a government conspiracy to hide evidence of extraterrestrial activity," according to Netflix. With the first season airing in 1993, this '90s television staple recently made a comeback on the Fox network with a series reboot.

Friends, one of the most successful television sitcoms of all time, lasted for 10 seasons. The television series starred Jennifer Aniston as Rachel Green, Courteney Cox as Monica Geller, Lisa Kudrow as Phoebe Buffay, Matt LeBlanc as Joey Tribbiani, Matthew Perry as Chandler Bing and David Schwimmer as Ross Geller, as a group of six best friends who live life, spark relationships and deal with drama in New York. The Netflix plot summary reads: "This smash-hit, multiple-Emmy-winning sitcom follows the merry misadventures of six 20-something apartment dwellers as they navigate the pitfalls of work, life and love in 1990s Manhattan."

The finale of the long-running show was the most watched episode of any show in the 2000s, according to the Chicago Tribune.

A popular television series that began in the late '80s, A Different World illustrated the life of the students at the fictional historically black college Hillman College. The show was an offshoot of the wildly popular The Cosby Show but focused on real-world issues of race, classism and relationships that The Cosby Show wouldn't touch. Starring Kadeem Hardison as Dwayne Wayne and Jasmine Guy as Whitley Gilbert, the series ended in 1993.

The Netflix summary reads: "A spin-off of The Cosby Show, this sitcom set at the fictional Hillman College launched with Lisa Bonet reprising her role as Denise Huxtable. By the time Bonet left the show in the second season, the solid cast had come into its own. Standouts include Kadeem Hardison as the irrepressible Dwayne Wayne, Jasmine Guy as snooty Whitley Gilbert, Dawnn Lewis as divorced older student Jaleesa Vinson and stand-up comedian Sinbad as coach Walter Oakes."