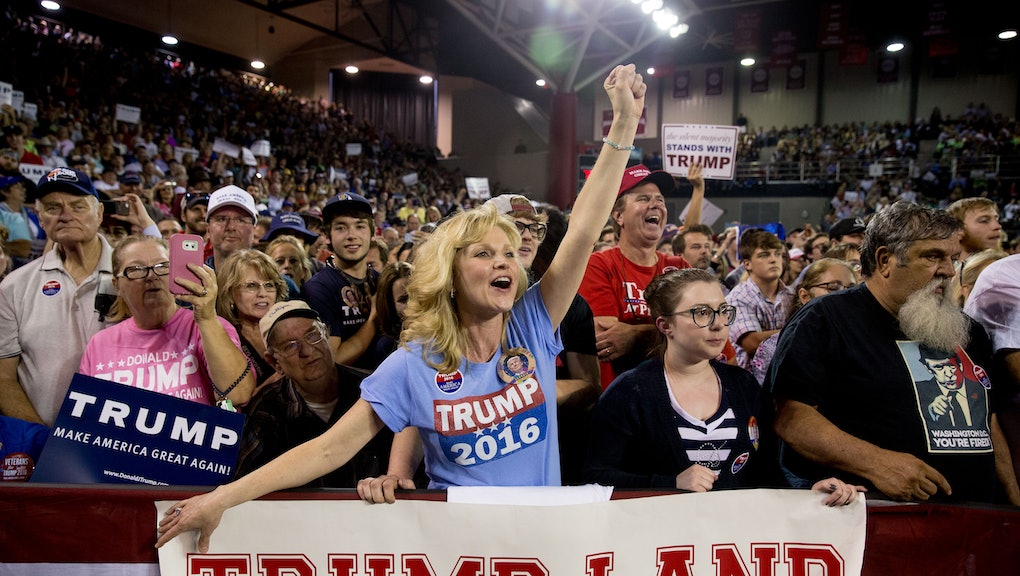 Welcome, officially, to the Age of Donald Trump.

The Republican real estate mogul stormed to victory in a host of Super Tuesday contests in a quest for the White House that can no longer be categorized as improbable.

Trump won seven states on Tuesday, coming after victories in the Feb. 9 New Hampshire primary, the Feb. 20 South Carolina primary and the Feb. 23 Nevada caucuses, all after having learned a tough lesson about the importance of ground games in the cycle's first contest, Iowa.

Marco Rubio, who's been forcefully trying to position himself as the best "rational" Republican alternative to Trump's bombast, gave the frontrunner a fight in Virginia — a performance that may have been a nod to the last firefight of a debate. His only victory came in Minnesota.

Ted Cruz, who has also taken on Trump by framing himself as the true conservative in the at times vicious primary contest, held off the juggernaut in his home state of Texas as well as in Oklahoma — bolstering his argument that he, not Rubio, is the real deal when it comes to stopping the "Trump train."

"We can nominate a Washington dealmaker, profane and vulgar who has a lifelong pattern of using government power for personal gain," Cruz said Tuesday night. "Or we can nominate a proven conservative who has fought consistently for working men and women and to defend the Constitution."

But the results were clear: Once again, Trump rode the tides of an enraged electorate to the winners' circle. Exit polls showed continuing enthusiasm among Republican voters for tougher immigration policies, including a temporary ban on Muslims entering the United States.

Trump's victories on Super Tuesday mean he is closer than ever to capturing the Republican nomination — and time is running out for establishment forces hoping to stop him.

Republicans look ahead: Amy Kay, a Charleston, South Carolina, photographer who volunteered for Rubio during her state's primary, told Mic the runup to Super Tuesday felt like "the end of the universe" to her.

"Has anyone thought with this guy is going to be like on a daily basis as our leader? There's enough chaos in the world," Kay said.

What Kay says she's worried about facing in November: Having Trump, "an unstable wannabe dictator versus Hillary [Clinton] the liar to choose from."

"He has preyed on the angry white voter and [the] undereducated," she said. "How is he presidential at all?"

Too soon for panic stations? Not everyone saw the decline and fall of the GOP — or American politics as we know it — on the horizon.

"This is a manifestation of frustration with the go-along [to] get along [attitude of] a lot of Republican elected officials have. I think the people have just had it," Ahern said.

Sure, he said, Trump has been sparing — to put it nicely — on the details of what he'd actually do if he won the White House: "It's certainly an unconventional approach to running for the presidency," as Ahern put it.

For those concerns — and others, including some of Trump's more controversial comments on other racial, ethnic and national groups — "Everybody who says we're going to get creamed if he's the nominee, I don't agree with it for one minute," Ahern said.

"He'd be an eminently better president than Hillary Clinton."

Beyond anger: There's no question Trump has done a masterful job of channeling Republican rage.

"Some explain the rise of Trump as an outgrowth of this anger. I think that's probably true to a certain extent, but even many conservatives are uneasy — to say the least — about Trump as the party's nominee," Timothy Hagle, a political science professor at the University of Iowa, told Mic.

"Despite all the things that Trump has said and done that would sink any other candidate, he seems to just roll on. Many of his supporters just don't seem to care. Are they really that angry with the leaders of their party? Have they just gotten to the point of "just burn it all down"?

Day of reckoning: Bigger picture, "If Trump actually gets the nomination, there will be a lot of Republicans who will face a hard question as to whether they want to support Trump, vote for Clinton or just not vote for president," Hagle said.

"If Trump gets the nomination and loses the general election, then Republicans will have at least four — and maybe eight — years to reflect on what happened."