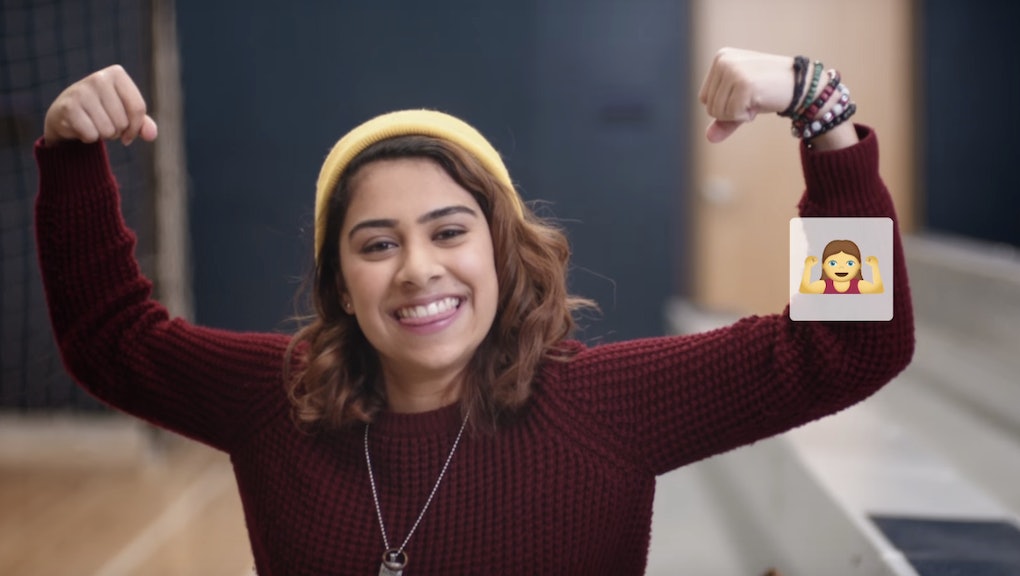 "There aren't enough emojis to say what girls do. That's just the way things are," laments a teenage girl sitting on bleachers in a school gym. In a new video, this young woman and a cohort of other girls complain about how women are depicted in emojis despite their demographic being major emoji users.

The video was released along with new research from feminine care product maker Always, which says girls send more than 1 billion emojis a day, according to Mashable.

When it comes to emojis, women and girls are limited to icons of pink manicures, princesses, brides, Playboy bunnies, haircuts, hearts and bikinis. Meanwhile, men have a range of expressions. They appear as policemen, detectives and spiritual leaders. Surfers, skiers, horseback riders, bicyclists, swimmers, basketball players — all these emojis are men. Always argues that today's emoji palate isn't relevant to the kinds of roles women play in everyday life.

As such, Always is appealing to the Unicode Consortium (the group that creates emojis) to add more emojis of women doing womanly things — like weightlifting and being lawyers — in their next batch of characters.

The Unicode Consortium pitch and new video are part of Always' #LikeAGirl ad campaign. Always first launched the #LikeAGirl campaign in 2014 with the aim of shining a light on women in the early stages of puberty, who suffer from decreased self confidence, by deconstructing the negative connotations around doing something "like a girl."

The video ad shows a director interviewing two sets of girls, those before puberty and those in their teens, along with two boys. The youngest girls, in addition to showing more spunk, also had very different ideas about what it means to do something "like a girl" than their older counterparts. For example: Running "like a girl," meant to "run fast as you can," according to one of the youngest interviewees.

Both ads hinge on a pop culture movement that wants truer depictions of women in the media and is being championed by popular figures like Beyoncé, actress Emma Watson and writer-producer Lena Dunham.

However, while having a big corporate sponsor back the push for better (and perhaps less pink) female emojis will certainly help put pressure on the Unicode Consortium, let's not forget that Always is using this campaign to align itself with a feminist movement in order to sell tampons and pads.