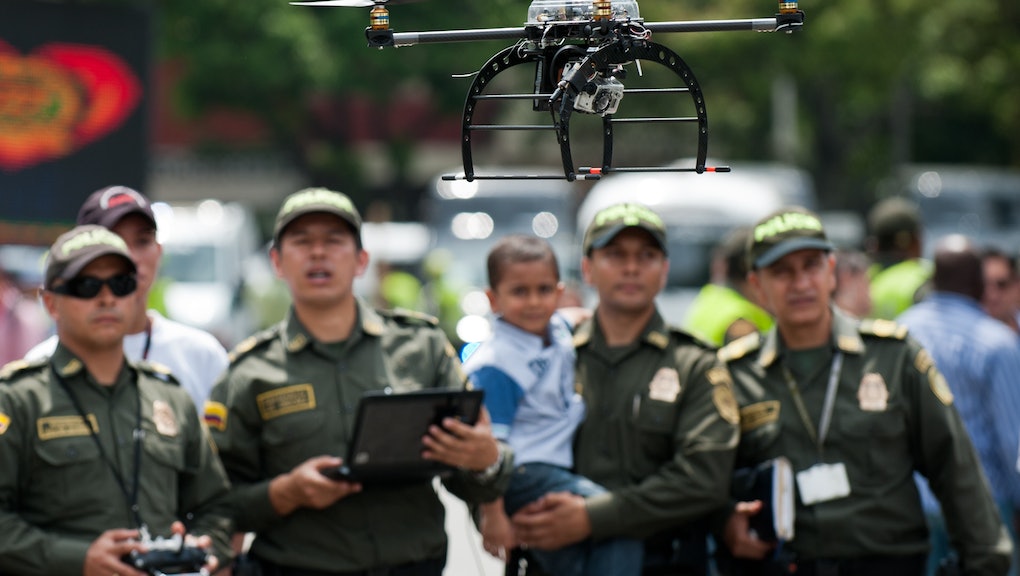 Hacker Says He Can Take Over Expensive Police Drone From Afar

If you hadn't yet heard that police are starting to buy flying quadcopter drones, allow us to also tell you that these drones you just heard about are already being hacked into and hijacked.

While finishing his graduate research at the University of Twente, IBM security researcher and show-off Nils Rodday found a security flaw in a $30,000 police drone that allows him to hijack and steer the drone from a mile away, Wired reported. With just a little USB radio chip and a laptop, Rodday is able to intercept the unencrypted signal between the drone and its controller.

Current police drones are often outfitted with cameras, and can be used in rescue and emergency situations to scout out locations that would be difficult to reach, so it's not as if Rodday's hack puts him in control of a hellfire-equipped predator drone.

"If you think as an attacker, someone could do this only for fun, or also to cause harm or to make a mess out of a daily surveillance procedure," Rodday told Wired. "You can send a command to the camera, to turn it to the wrong side so they don't receive the desired information ... or you can steal the drone, all the equipment attached to it and its information."

"If you think as an attacker, someone could do this only for fun, or also to cause harm or to make a mess out of a daily surveillance procedure."

But the fact that so many new gadgets — and now home appliances like ovens, refrigerators and simple cameras — are now wired to the internet means that all of these things are vulnerable to anyone who means either harm or mischief.

Rodday will present his research in full at the RSA security conference this week, where a cornucopia of hacking nightmares will be on display.