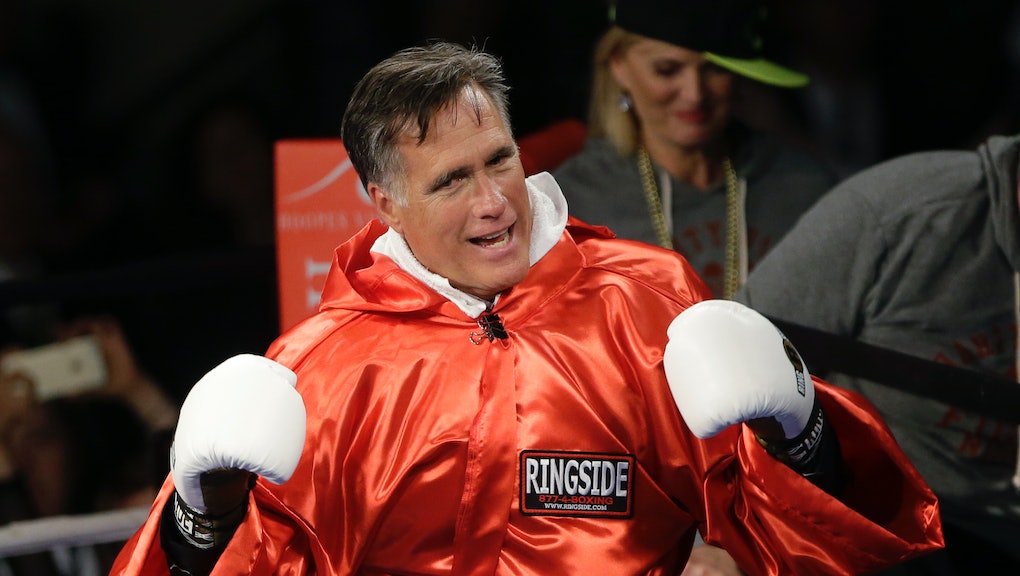 Mitt Romney's getting back in the ring.

The two-time presidential hopeful, who lately has been swinging at current Republican frontrunner Donald Trump on social media, will take the fight to real life address the state of the 2016 race Thursday at the University of Utah. Expect him to drop the gloves.

An aide said Romney's speech "is not an endorsement or announcement of candidacy" by Romney, who sought the GOP presidential nomination in 2008 and won it in 2012.

Instead, the former Massachusetts governor and two-time presidential candidate will speak on "the state of the 2016 presidential race and the choices facing the Republican Party and the country," according to the aide.

If Romney's Twitter feed is any indication, the speech — timed for the morning of the next televised Republican debate in Detroit — could be a barnburner.

Romney, who left Massachusetts to take up official residency in Utah after his last campaign, has kept up a drumbeat of criticism against billionaire Trump, calling him out on everything from the support he's gotten from former KKK grand wizard David Duke to his refusal to release his tax returns:

He's been going after Trump with the hashtag #WhatIsHeHiding:

Back in December, Romney took issue with Trump's vow to block Muslims from entering the United States for, the candidate said, national security reasons:

Romney also retweeted his wife, Ann, in support of Fox News host Megyn Kelly after Trump lashed out at her for asking him about past misogynistic remarks during a debate in Cleveland.

Romney isn't alone in speaking out against Trump's brand of bombast. Katie Packer, his deputy campaign manager in 2012, is head of Our Principles PAC, which is spending on anti-Trump ads. Tim Miller, who ran communications for Jeb Bush's suspended presidential bid, just signed on with Our Principles.

What does it mean? Larry Sabato of the University of Virginia's Center for Politics told Mic Wednesday that "as the titular head of the GOP, Romney has every right to warn the party that it is going off the tracks and heading for division and disaster."

"Would Mitt Romney love to find a way to become the nominee again?" Sabato asked. "The only cure for White House fever is a pine box placed six feet underground. Hard to see how he does it."

"Maybe he wants to endorse another candidate. Of the remaining contenders, only Rubio and [John] Kasich would appear to be possibilities," Sabato continued. "Or perhaps he wants to denounce Trump. But will he do it in a veiled way or frontally? Far more questions than answers."

Romney's gamble: It's not clear Romney's the man to turn the GOP in a new direction.

After all, he lost the GOP nomination to John McCain in 2008 and then led the party to defeat in an uphill attempt to unseat incumbent President Barack Obama.

Romney, whose late father served as governor of Michigan and also sought the presidency, passed on a potential third run — a relief to some Republican watchers who thought the last thing the GOP needed for a fresh start was a Romney rerun.

He announced in January 2015 that he'd decided that "one of our next generation of Republican leaders, one who may not be as well known as I am today, one who has not yet taken their message across the country, one who is just getting started, may well emerge as being better able to defeat the Democrat nominee."

Now, Romney's an elder statesman of the party. Whether an appeal from his corner will pull skittish Republicans away from supporting Trump — or merely fuel their fire — will be clear in two weeks with the results of the March 15 primaries in Ohio, Florida, Illinois and Missouri.