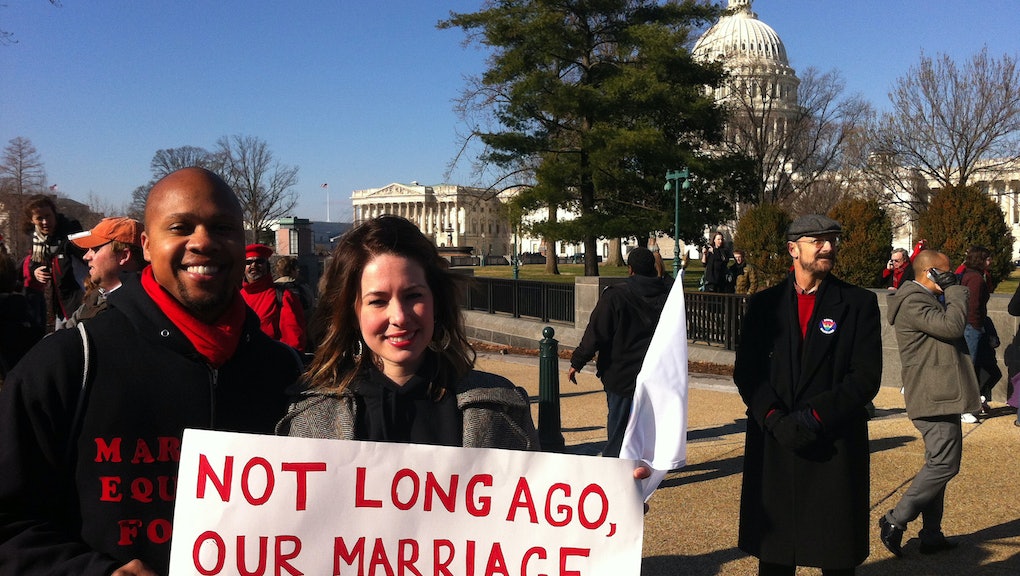 The Conversation About Interracial Dating Needs to Change — Here's Why

Although interracial dating has come a long way since miscegenation laws were ruled unconstitutional in the United States in 1967, the conversation surrounding it still has barriers to break down. A 2015 poll found that while 88% of millennials were open to dating outside of their race, about 54% have actually done so, according to Fusion.

"This is a movement toward a post-racial society, but most social scientists would agree we're a long way from a colorblind or post-racial society," sociologist Dan Lichter told USA Today. He added, "Race is still a category that separates and divides us."

While interracial dating truly is becoming more common, it's still coated in stigma that overshadows that progression. Often, the idea of interracial dating as a whole shallowly falls under the label of fetishization or rebellion, whether misconstrued or not, as interracial couples are often judged by race and stereotypes first rather than as individuals in love.

"There is not a single interracial couple I know who has been together for an extended period of time who has not experienced some awkwardness or indignity that same-race couples do not," Keli Goff wrote for the Daily Beast.

For starters, fetishization is real, and online dating sites make it obvious. A quick Google search on "interracial dating" reveals sites with names like AfroRomance and AsianDate.

In 2014, major dating platform OkCupid released data showing that users still have biases when it comes to contacting specific races.

But for many real life interracial couples, race is merely one more aspect of their normal relationship. "It may sound weird but sometimes I forget that we're in an interracial relationship," Alissa Henry wrote for Madame Noire. "This is probably because I'm not always interpreting everything through that fact." She added, "However, there are definitely times when I'm reminded just how different our thinking can be as a result of our skin color."

On a Reddit thread discussing negative reactions while dating interracially, many users share instances of stares and comments while in public. But this experience often varies on where the couple visits or lives.

Against common misconceptions, interracial relationships aren't the end-all to racism. "Choosing to love and partner with someone from another race doesn't mean that you're colorblind; it means that you loved in spite of color," Chaedria LaBouvier wrote for Elle. "It means that you're willing to take a hard look at your own prejudices. And it certainly doesn't mean that you're given a pass to do and say careless and culturally tone-deaf things."

Interracial couples are slowly crumbling barriers whether intentional or not. That, over racial stereotypes, should be recognized.