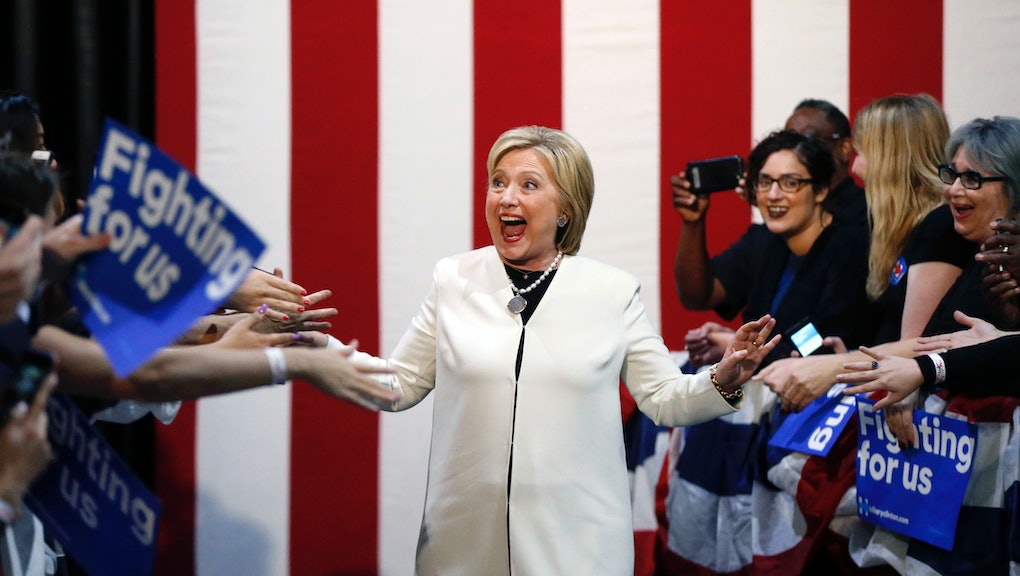 Whelp, United States, looks like we may well be staring down the barrel of a Donald Trump candidacy in 2016: The Republican frontrunner consolidated his lead on fellow presidential hopefuls Ted Cruz, Marco Rubio, John Kasich and Ben Carson with a sweeping Super Tuesday win on March 1.

For the Democrats, Hillary Clinton established a substantial lead on Bernie Sanders. The former secretary of state now has 1,052 delegates to his 427, prompting us to consider: What will a Clinton v. Trump 2016 presidential election look like? Will it be all about gunning for greatness, or might we begin to strive for something else? The Democratic frontrunner thinks it's time to reframe the conversation.

Read more: Super Tuesday 2016: Here's Who Won in Every State

"America is strong when we're all strong," Clinton said in her victory speech Tuesday night. "We know we've got work to do. That work, that work is not to make America great again. America never stopped being great. We have to make America whole. We have to fill in what's been hollowed out."

The most recent data from Real Clear Politics (RCP) suggests that we'd be making America whole again in 2017: In a general election, polls put Clinton ahead of Trump 46.5% to 43.5%. Currently, Trump is favored amongst diploma-less white men who feel they've been denied their voice, would like to keep foreigners out (say, with a towering wall) and who occupy those pockets of the country that are least friendly to non-white races, according to the Atlantic.

As CBS reported, it was the xenophobic contingent that delivered Trump his Super Tuesday win, combined with the support of those Republicans who were disillusioned with economic policies and the government itself. Trump's non-political background appeals to this crowd.

Cruz and Rubio, meanwhile, have respectively attracted traditional conservatives plus evangelicals, and Republicans who valued experience along with their party's victory in a general election. According to CBS, three of four Cruz and Rubio voters in six Super Tuesday states would be displeased with a Trump victory. Indeed, ThinkProgress found some Cruz voters at a Houston rally who said they'd go Clinton before they'd go Trump.

Granted, that's not exactly an unbiased source nor is it a large sample size, but it may speak to a broader trend. According to the most recent CNN/ORC poll, Clinton could win in a general election with Trump as her opponent, but could lose to both Rubio (47% to 50%) and, narrowly, to Cruz (48% to 49%). Trump's support base looks solid at this point, but CNN's poll suggests that there exists a body of Republicans who wouldn't turn out for Trump as the candidate.

Sanders, the poll says, has the highest favorability rating of all the candidates still in the game and would best Trump (55% to 43%), Rubio (53% to 45%) and Cruz (57% to 40%). Should the primaries continue to go the way they're going, though, it looks likely that Sanders' supporters would cast their ballots for Clinton, should she become the party's nominee (and perhaps especially so, should she choose a more progressive running mate). Whether or not the same can be said for Trump remains to be seen.