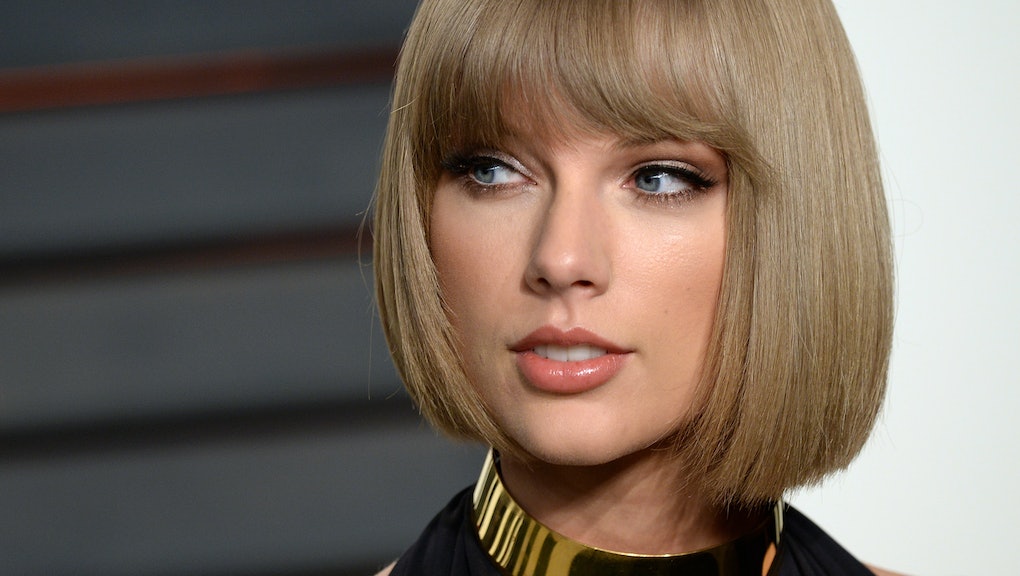 Taylor Swift may be a mega-celebrity with 10 Grammys and a clique of famous people always hanging around her, but that doesn't mean she isn't also a normal person, right? Here are thirteen videos from Taylor Swift's Instagram that prove she's just like us. SHE'S JUST LIKE US, OK?!

OK so here's Taylor just riding along in her car with her dad, listening to her own hit song "Out of the Woods," when Papa Swift looks around at the traffic and says, "We are not out of the woods." Da-ad.

2. She takes selfies with her cat.

Every cat owner knows that taking selfies with your kitty is one of the biggest perks of cat ownership. Just like any regular person whose life is devoted to their cats, she takes a lot of pictures of hers.

3. She also talks to her cats

This is also very normal. Again, cat lovers will confirm.

Check out this mundane video of Taylor on some exotic trip, near a really cool looking lake, dealing with a bug flying at her face. We've all been there, girl ... well except for the exotic trips and the cool lakes. But the bug part is very relatable.

Literally every human on the planet loves Frozen ...or maybe just knows some of the words to "Let it Go." Either way, check out this video of Taylor Swift dressed as Olaf the snowman at one of her concerts, just like a normal, average person!

Dogs lick Taylor Swift all over her face and step on her with their little paws. Dogs don't care if you're a celebrity; they are the ultimate equalizer.

7. She makes her friends meet her cats.

Sometimes, when she's making music videos, Taylor Swift falls down. That's OK Taylor, every body falls down. What's important is getting back up.

Just like any normal normie, when confronted with jumbo shrimp, Taylor doesn't ask for help. Instead, she stabs her food with chopsticks until someone shows her how to do it right. We get you, Taylor.

10. She gets annoyed when her pets wake her up.

Everyone knows the feeling of trying to sleep while your dog or cat or parrot or gecko is making weird noises and trying to get your attention. It's tough.

11. She's super competitive when it comes to Easter egg hunts.

Easter egg hunts are not a game, they are very, very serious. And, like most people, Taylor Swift gets that. She's not afraid to go all-out.

Everyone accidentally tears down doors sometimes. You do it, I do it, Taylor Swift does it. It's called the human experience, OK people?

Just like us, Taylor Swift loves to rock out in the car with her friends. Except not like us, her friends are famous musicians.