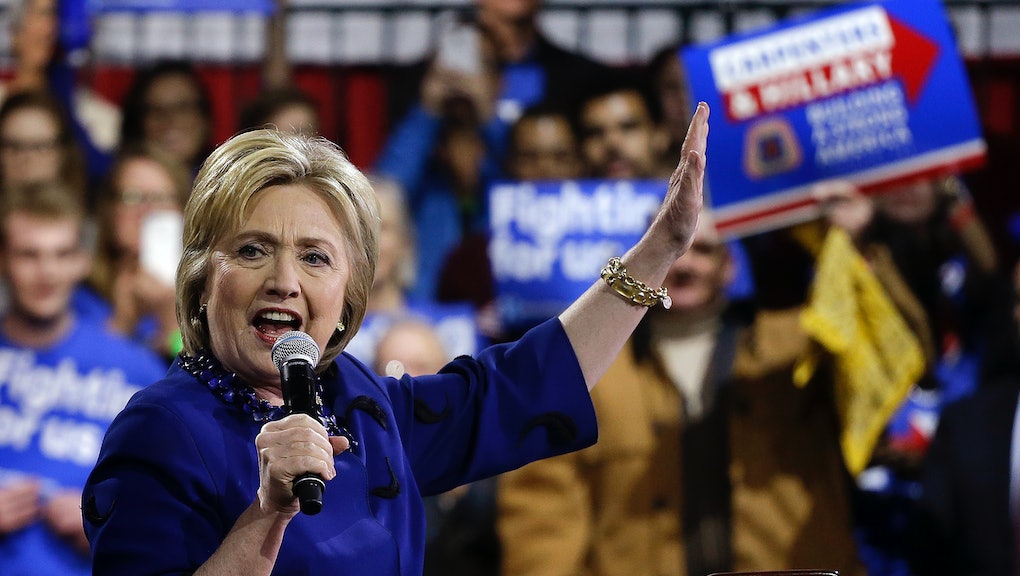 Hillary Clinton to Black Woman's Question: "Why Don't You Go Run for Something, Then?"

Hillary Clinton continues to dominate among black women voters at the polls, but her individual exchanges with them keep making headlines for all the wrong reasons.

The latest example comes courtesy of a campaign stop she made in Minneapolis on Super Tuesday: The former Secretary of State was confronted in a coffee shop by a young woman later identified as Stacey Rosana, a local organizer and Black Lives Matter activist.

After a brief conversation caught on video, Clinton could be heard exasperatedly telling Rosana, "Why don't you go run for something, then?" Rosana then walked off under the nervous gaze of Minnesota Gov. Mark Dayton, who could be seen standing in the background, visibly uncomfortable.

When Rosana asked who specifically she was referring to, Clinton mentioned Abdi Warsame, the first Somali-American elected to the Minneapolis City Council, according to City Pages. Rosana responded inaudibly, shaking her head, to which Clinton replied, "You know what dear, you have a different opinion."

"He is a Somali-American elected to the city council," she said. "I'm really proud of that." Dayton, who was watching the exchange, stepped in at that point to tell Rosana that other people needed time to ask questions of Clinton.

"Well why don't you go run for something then?" the former secretary added. She then ended the increasingly tense exchange, saying to Rosana, "Well, good. Good luck to you."

Throughout her campaign for the Democratic presidential nomination, Clinton has had numerous uncomfortable confrontations with young black activists and organizers. The most recent dealt with Clinton's fraught history with racial justice — particularly her advocacy for then-President Bill Clinton's 1994 crime bill and her vocal perpetuation of the term "superpredator," which further demonized gang-involved youth of color, in 1996.

The exchange came at a private fundraiser in Charleston, South Carolina, on Feb. 24, where an activist named Ashley Williams asked Clinton to apologize for her role in perpetuating mass incarceration — which to this day disproportionately impacts black Americans.

"Looking back, I shouldn't have used those words, and I wouldn't use them today," Clinton said in an apology issued the next day.