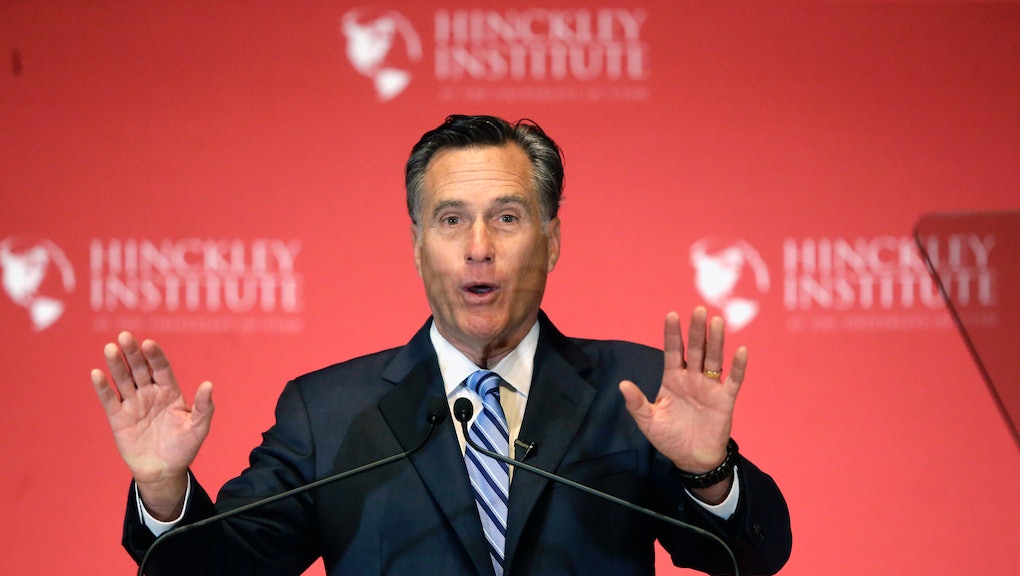 Mitt Romney tore into Donald Trump in a sweeping indictment of a speech Thursday, saying there's plenty of evidence the GOP frontrunner is a "con man" who would lead the nation over a cliff.

"Here's what I know: Donald Trump is a phony, a fraud. His promises are as worthless as a degree from Trump University. He's playing the American public for suckers: He gets a free ride to the White House — and all we get is a lousy hat," railed Romney, the Republican Party's 2012 presidential nominee.

Romney spoke at the University of Utah as GOP leaders gird themselves for a last effort to stop Trump's march to the nomination.

They'll have an uphill climb after Trump's command performance in the Super Tuesday primaries, which illustrated the powerful rage of the legions of early state primary voters who've gotten behind him.

Romney didn't endorse a candidate — or say he had changed his mind about running for the nomination again himself — but went all out in sounding notes of alarm as one of his party's elder statesmen.

"Mr. Trump is directing our anger for less than noble purposes. He creates scapegoats of Muslims and Mexican immigrants; he calls for the use of torture and for killing the innocent children and family members of terrorists," the former Massachusetts governor said.

"He cheers assaults on protesters. He applauds the prospect of twisting the Constitution to limit First Amendment freedom of the press. This is the very brand of anger that has led other nations into the abyss."

Romney, who also ran in 2008 and was defeated by John McCain, highlighted Trump's prickly personality: "Think of ... the bullying, the greed, the showing off, the misogyny, the absurd third-grade theatrics."

He attempted to insulate himself from an expected Trump tweet storm: "Watch, by the way, how he responds to my speech today. Will he talk about our policy differences or will he attack me with every imaginable low road insult?" Romney asked. "This may tell you what you need to know about his temperament, his stability, and his suitability to be president."

Romney, who's been attacking Trump on Twitter himself for not releasing his tax returns or shedding real light on the veracity of his hard-line immigration stances, also tried to get the GOP and nation to focus on what he framed as the big picture: Winning in November.

"For the last three decades, the Clintons have lived at the intersection of money and politics, trading their political influence to enrich their personal finances. They embody the term 'crony capitalism.' It disgusts the American people and causes them to lose faith in our political process," Romney told the crowd.

"A person so untrustworthy and dishonest as Hillary Clinton must not become president. But a Trump nomination enables her victory."

As Romney concluded his remarks, Trump's Twitter feed remained silent on the speech: