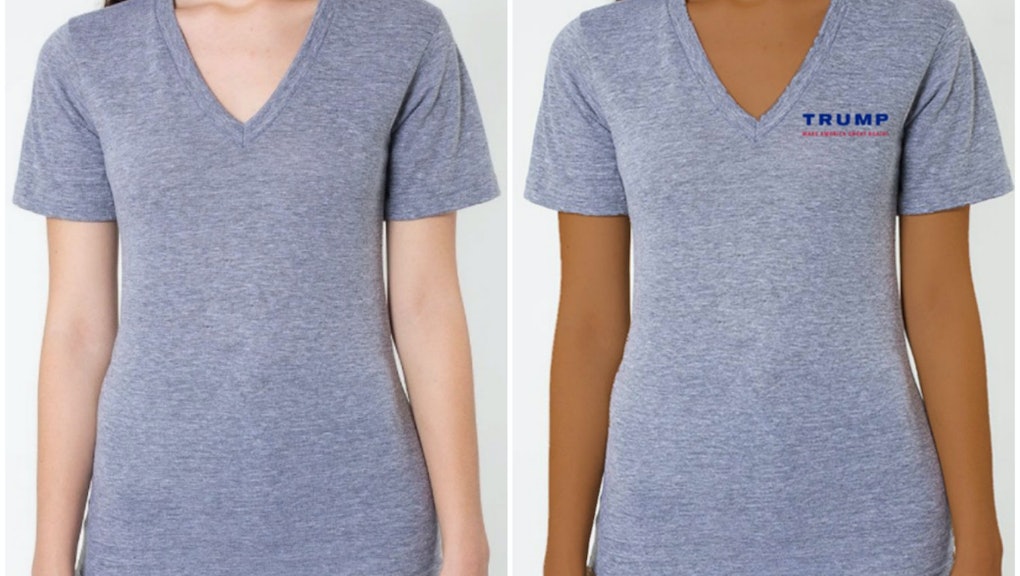 Presidential merchandise can be lame, too trendy or, as Texas Sen. Ted Cruz proved, incredibly offensive. But according to one Twitter user, Donald Trump may have just one-upped him. Because of course he did.

Eric Ming, who works as the digital director for Maryland Congresswoman Donna Edwards' campaign for Senate, tweeted a picture Wednesday allegedly from Trump's website of a model wearing a gray, V-neck T-shirt with his slogan "Make America Great Again" across the chest.

Right next to it is a picture from the T-shirt manufacturer that Trump allegedly bought the T-shirt from, sans slogan but ostensibly on the same model — except their skin colors are different.

Read more: The 2016 Campaign Merchandise Tells an Important Story About This Year's Candidates

As you can see in the tweet, which has already been retweeted more than 1,000 times, the model's skin on Trump's website appears to have been augmented to look several shades darker. And as far as Mic can tell, the images are legit: The image on the left straight to Trump's website, and the image on the right straight back to JCG Apparel, which offers custom prints on basic apparel like T-shirts made by other manufactures.

If purchased from JCG Apparel, the gray Trump shirt is actually an American Apparel shirt. And all three images look nearly identical save for the skin color, down to the model's pale blue jeans.

Upon further digging, we found that none of the other models shown on Trump's merch website appear to be given the same shoddy Photoshop treatment. (Mic has reached out to JCG Apparel and the Trump campaign for comment.)

At a time when those in the fashion and retail worlds are calling for more diversity for models, especially including women of color, this is probably not what they had in mind?

March 3, 2016, 3:32 p.m.: As of Thursday afternoon, the shirt is no longer displayed in the apparel section on Donald Trump's website, but it is still available for sale via the direct link. However, the model's skin now appears lighter, identical to the images on American Apparel and JCG Apparel's websites.