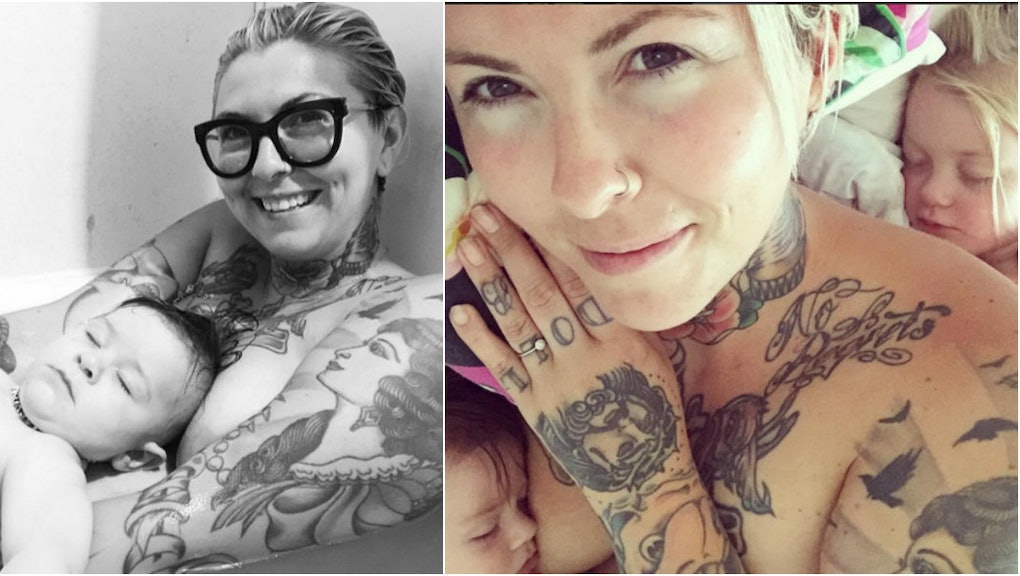 There are lots of things women expect about childbirth before they've actually had a baby. They expect it to hurt. They expect it will be painful. Did we mention the thing about it hurting already? A foot-long human being is literally barreling through your nether regions. That's like trying to squeeze a party-sized Subway sandwich through a PVC pipe. That is some hardcore shit.

Any-curds-and-whey, while we rarely think of childbirth as a pleasant experience, Angela Gallo, a Melbourne-based mom blogger and photographer, insists that it can be. And not only can childbirth be pleasant, but it can also be pleasurable. Like, really, really pleasurable.

In her Feb. 16 post, Gallo, a blogger and doula, said her decision was made on a whim while giving birth to her second child at home.

As it turned out, Gallo's bean-flicking endeavors successfully resulted in orgasm.

"Clitoral stimulation worked an absolute TREAT," she wrote. "It shifted my focus to my vagina, to the energy brewing within me. It made me feel connected, and made me feel like I had some control over what I was feeling... It was my glorious instinctual pain-relief system coming to life! I am so proud of myself for exploring an avenue so typically shamed."

Gallo goes on to list more reasons women should self-stimulate during childbirth, such as that it releases the feel-good chemical oxytocin and that it can help relieve pain. But really, there's only one reason: It gives you an orgasm, and orgasms are awesome.

Although the concept of having an orgasm during childbirth might sound, for lack of a better term, like hippie-dippy garbage, there's actually some evidence to suggest that it might be beneficial for women in labor. According to OB-GYN Dr. Christiane Northrup, it's actually possible for women to inadvertently have orgasms during labor.

"When the baby's coming down the birth canal, remember, it's going through the exact same positions as something going in, the penis going into the vagina, to cause an orgasm," Northrup told ABC News in 2008. "And labor itself is associated with a huge hormonal change in the body, way more prolactin, way more oxytocin, way more beta-endorphins — these are the molecules of ecstasy."

Yet if there's one thing we can learn Gallo's account, it's that most popular narratives overlook the reality of what it's actually like to give birth, which is a lot more complex than just an experience of pure pain.

"For as far back as scientific, biblical, or medicine-based text exist, birth has always been spoken about as something to 'endure'; pain as punishment for eating the apple off that damn tree," she wrote. And hey, if coming your face off while you're pushing a tiny, eggplant-colored human out of your coochie snorcher helps counteract the idea of female pain as a form of punishment, so much the better.