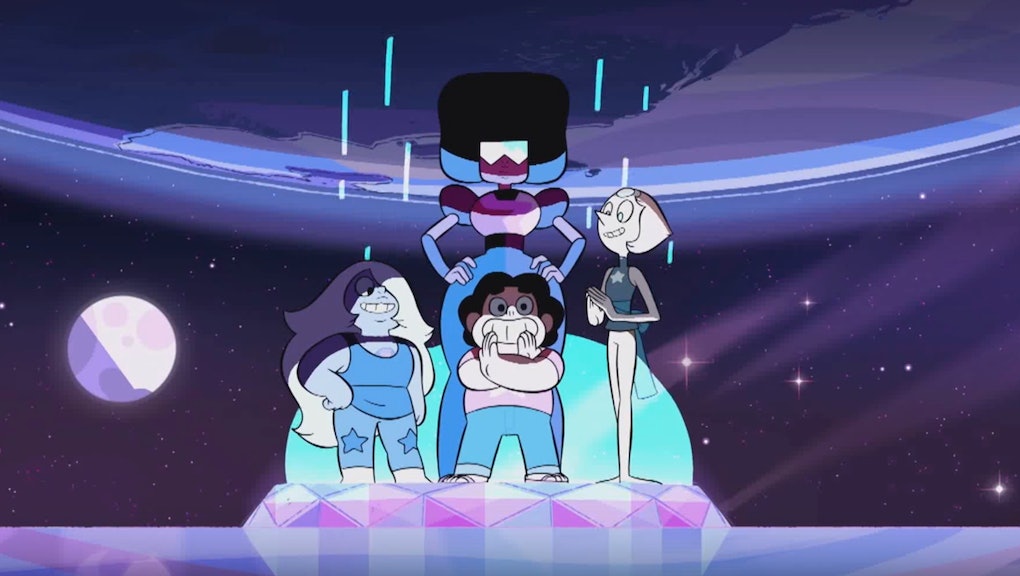 Cartoons are either for adults or children — and it's split down the middle. An overwhelming majority of cartoons have historically catered to children, while some series have mature motifs and cater to an adult audience (hence the name of Cartoon Network's spinoff, Adult Swim).

However, sometimes animated series are created with both adults and children in mind — anime blurs the line on many occasions — and the network that plays host to some of the most mature cartoons with kid audiences is Cartoon Network. Choosing Adult Swim cartoons would be a cop-out; therefore, here are six Cartoon Network shows that have aired on the network, and the original Toonami offset, that cater to adults as much as children.

Adventure Time: Adventure Time is set in the magical world of Ooo, putting a boy Finn and his talking dog Jake on an... adventure? Pretty much. The premise is set up for Finn and Jake to explore Ooo's craziness and wacky characters, including a crazy old man who thinks he's a king, a mad-scientist who happens to be a princess and a goth-rocking vampire.

All these themes in the story hit a mature tone. It's heavily implied that Ooo, for starters, is a world created in the aftermath of a nuclear war, and the world we're thrown into are the remnants of that previous society. It's good fun in Adventure Time, with a lot of thematic depth.

Regular Show: If you consider a raccoon and a blue jay working for a man with a candy dispenser head at a local park normal, then yes, this show is indeed regular. Regular Show features a lot of zany characters, and really, Rigby and Mordecai are doing what any teenager would do at a summer job — trying to blow off actually completing work by any creative means.

It's a great metaphor for adjusting to adulthood, and at the very least, the diverse cast of characters are wholly entertaining. Any time the eccentric Pops opens his mouth, hilarity ensues.

Steven Universe: Steven Universe acts as an unofficial spin-off to Sailor Moon, as the titular character takes his mother's spot among the group of female heroines to fight evil. It's a really fun concept, but where Steven Universe receives its most praise is its positive portrayal of queer characters and gender-fluidity — making it not only a fun series, but one with an important message about acceptance.

"It weaves a diverse representation of sexuality, gender, and even sex into the very fabric of the show without wringing its hands about it," Caroline Framke wrote for Vox. "As in life, all that stuff is just there. Steven Universe naturalizes the issues many shows would rather sensationalize in a way that's clever but not condescending to its younger audience."

As an added bonus, the fight scenes are spectacularly entertaining.

Star Wars: Clone Wars (2003 version): The second iteration of the Clone Wars saga is more well-known — and lasted longer — but the original Clone Wars series produced by Genndy Tartakovsky is just as good, if not better. His Clone Wars brought a straightforward, mature narrative that was divided into three seasons, and in that span was able to nab three Emmys in the process.

The dialogue is intentionally minimal, and the animation seems a bit dated now, but it was ahead of its time in many respects (the visual design won an Emmy in 2005). Any passionate Star Wars fan is likely to enjoy Clone Wars, and the respective plot points that hint at the eventual turn to the Dark Side for Anakin Skywalker. Moreover, the series concluded with the opening sequence of Revenge of the Sith, making it the perfect, and original, interlude between the two feature length films.

In fact, the most noteworthy difference in the narrative between Clone Wars and Revenge of the Sith is the use of the robotic villain, General Grievous. While Revenge of the Sith made him a cowardly figure, Clone Wars created an absolute badass — introducing him single-handedly taking out a group of Jedi with ease.

"Courage has tackled mobster foot fungus, Norse goose gods, and even went through the entire plot of the Danny Boyle film Sunshine years before it was even made," Tom Hoover wrote for Nerd Like You.

Among its creepiest moments is when an apparition in the form of King Ramses, who repeatedly asked Eustace and Muriel to "return the slab" that they had taken, eerily sways with the wind outside of their secluded house. For a full dose of the show's disturbing imagery, YouTuber WatcherOfThe2000s compiled 10 of the creepiest episodes from the series' run, which you can check out below.

Megas XLR: The show had a very short run, but in the time that it was on air, Megas XLR was a mindlessly fun joyride. The show combined the robot fighting concepts of Gundam and the animated Transformers with, well, teenagers from New Jersey. The two leads, Coop and Jamie, discover a mecha robot in a junkyard and use it to repel aliens that either want the technology, or simply want to chaotically attack the city.

The kicker: the Megas XLR robot stands for Mechanized Earth Guard Attack System, eXtra Large Robot. If that's not enough to describe the nonsensical tone of Megas XLR, perhaps it's best encapsulated in its theme song.