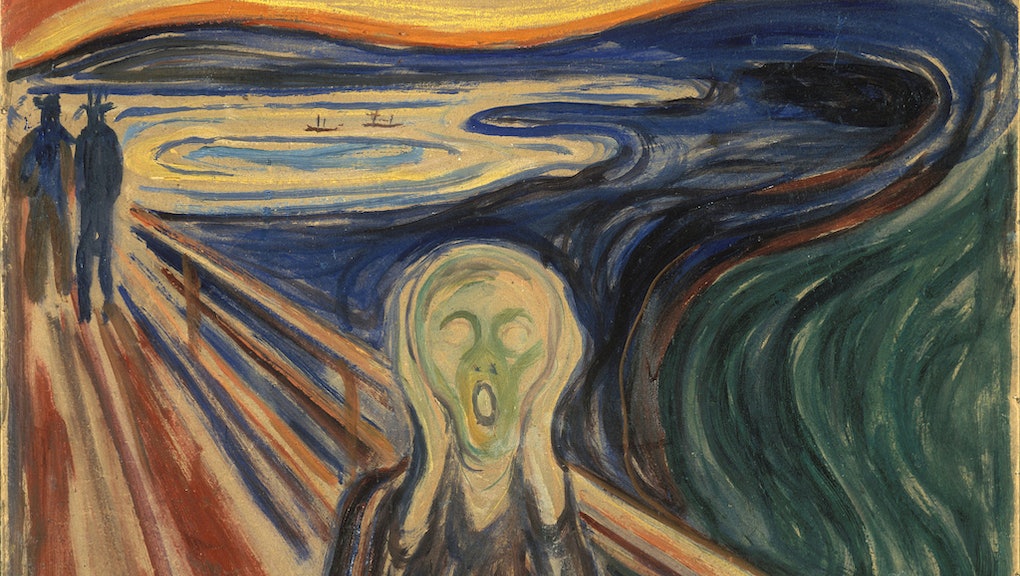 Post-Hookup, Pre-Relationship Anxiety Is Real — and It's Kinda Terrifying

Like many independent young women, Jane* has a lot of shit going on.

The 25-year-old has a demanding job and a jam-packed social life. She also says she has mixed feelings about monogamy. After she and her ex-boyfriend broke up, Jane decided to pursue other options, which led to "a couple of mistake boos" but no new commitments. She told Mic she developed a proclivity for "identifying a fuccboi within a couple of minutes of conversation," which led to her avoiding men altogether. She now considers herself "single AF."

And yet, she's sort of been seeing someone for several months.

"We're still very green and we've had a conversation about not going out on dates with other people, but we haven't had the, 'Are we committed, boyfriend/girlfriend?' conversation, which I am dreading," Jane said. "Part of me feels like this is fun and he's interesting and sweet and having a heavy commitment stamp on us will ruin the easygoingness of our current situation."

Jane also worries the guy she's "low-key dating," as she put it, could become insecure, jealous and too involved in her life. She wants to reserve the right to bail on the relationship without complication. "I feel like that if shit hits the fan I always have the option of saying 'deuces!'" she said. "We have an out... which lets us enjoy each other without the added pressures of monogamous relationships."

Despite her best efforts to go with the flow, however, Jane's apprehension about moving forward is making her feel like a crazy person. She's not, though: It's just post-hookup, pre-relationship anxiety.

Jane's almost-relationship isn't really so novel: She has a dating partner, just like an ever-increasing number of other millennials. As young adults' typical relationship trajectory has changed and we've continued to delay marriage, more 20- and 30-somethings are pursuing nontraditional forms of dating that don't involve committing to lifelong monogamy, or committing to anyone or anything at all. A majority of us are actively staying single, and not without good reason.

But "being single" doesn't always mean "being alone," and many millennials have started to occupy the liminal space between hooking up and getting serious — a space that can be dizzying and full of anxiety. Higher rates of cohabitation before marriage (and avoiding matrimony altogether) have, after all, raised the stakes of being "in a relationship" and have made it seem like a bigger commitment.

So, we're freaking out. And we're coming up with rational excuses to explain away our fears about diving into "something."

"For me, [my fear] is less a feeling of rejection and more a feeling of, 'Am I ready to commit to this one person only?' and if I think he's ready to commit to me," Jane said. "Commitment is beautiful but it's also a heavy, heavy feeling, and having done it before, I carry a certain careful caution with claiming a dude as 'my main.'"

The thing is, the fear of entering a relationship isn't always one of commitment: We're also concerned about messing up the balance of a pretty solid single life. We want to pursue our careers, devote ourselves to our friends, spend time by ourselves and generally indulge in being free agents. Even when faced with the possibility of having a good thing — a romantic relationship, whether one that lasts forever or one that ends — the thought of missing out on those opportunities can be overwhelming.

"[I was worried about] all of the things," Kathleen*, 32, told Mic of the time just before she started a two-and-a-half-year relationship. "I am a chronic over-scheduler, with a full-time job, a part-time job, part time grad school, and a large group of friends. I also need a good chunk of alone time."

Alexa*, a 22-year-old who is currently single and not looking to date anyone, feels similarly, but she's not just worried about the present moment. She told Mic her fear isn't specifically of tying herself to another person and how it will affect her day-to-day life, but of how her genuine desires for her future might change if she's in a relationship.

"If I started dating someone now, there would be a risk that I would either have to end it soon, or that I would then start to incorporate that relationship into my decision-making process when considering future educational and career opportunities," Alexa said. "I could never forgive myself if I compromised my dreams for a guy. And I'm afraid that if I allow myself to like someone too much, or even love them, then that very well may happen."

That's something Alexa shares with a number of other millennial women, in particular, who have an unprecedented opportunity to build independent single lives where and how we want to build them. It's something many young women want to take advantage of. The emphasis on doing so without the help of a partner, however, has led many young women to feel a deep sense of dread that precludes meaningful relationships, according to Wendy Walsh, a relationship expert and author of The Boyfriend Test.

"I think women are adopting male models of [relationships] because they think that's female sexual freedom, but adopting a male version of anything isn't female freedom," Walsh told Mic. "Men are slightly more wired to spread their seed, which is a vast generalization, but traditionally men are the ones who got cold feet around commitment. Now that women are making money and finding some sense of meaning in their careers and having wonderful single lives, they're starting to experience the same cold feet as men."

That's not stopping everyone from pursuing relationships, but it's certainly making the process of entering a new romantic entanglement a little less joyful — and that doesn't just go for women.

"With so many guys in the past, I was very apprehensive about committing to a legit relationship because of location," Nathaniel*, 27, told Mic. "I loved where I was [living] and didn't have any desire to leave. So if things started getting serious with a guy, I'd often be like, 'Well, wait, is this distance actually sustainable? No, OK, bye.'"

But when Nathaniel met his current boyfriend, with whom he now lives, he was shocked to find himself "totally willing to deal with the logistics," though his apprehension about how they'd move forward remained. It was a hurdle, but it wasn't insurmountable.

"Ultimately I think apprehension around becoming 'official' can be overcome if it's truly the right person," he said. "If it can't be overcome, then it's probably because something within you is like, 'Meh, there might be something better out there.'"

For a number of people, that "something better" might be an ex. In a survey, several people told Mic they were hesitant to commit to someone new for fear of shutting the door on a previous relationship. Past flings and partners can also create pre-relationship anxiety in another way, too: When we have more old relationships to which we can compare new ones, different feelings can make us worry about moving forward.

"I worry because...with the people that I usually ask to be my boyfriend, there is so much passion: we may not be right for each other but there is all this love and desire," 26-year-old Zach*, who says he is "sort of seeing someone," told Mic. "With this boy, however, I am thinking, 'There is no fire here but there is definitely Earth. The ground is so solid. I could walk on it and build up from it and what I have built on it would stand for so very long."

And yet, there's still something holding him back: "Just because this boy is the opposite of the other boys doesn't mean he will be better," Zach said. "A penny can show heads or tails, but it'll always be worth one cent."

Walsh noted this could also be a sign of deeper issues. "It's actually attachment anxiety," she said. "What happens in our early life is we start to develop a schema for love and attachment. People who are more apprehensive of bonding tend to be people who have a little more anxiety around attachment stuff. Perhaps as an infant their needs weren't met."

Or perhaps it's just a question of learning to balance competing desires, of checking in with valid concerns and pushing past the anxiety as it feels right. That's easier said than done, of course, but for plenty of millennials who are already in relationships, it's certainly possible.

"I don't know how I'm dealing with [my anxiety], or if I'm dealing with it," Jane said of her romantic situation. "At some point I will need to make a decision, and we'll have that conversation, but until then I just want to genuinely enjoy this process of getting to know someone. If I do commit to this guy I will always look back at this time as the funnest part because it was the most interesting and most uncertain."

Or, she added, "maybe I am just holding out for Miguel to break off his engagement to Nazanin Mandi and come get this work... A girl can dream."