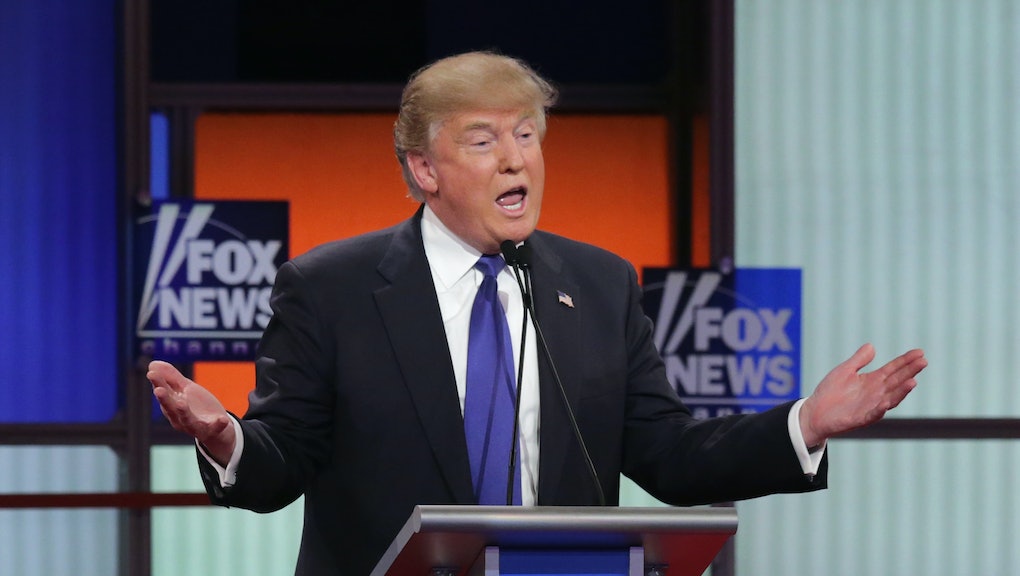 Republican presidential frontrunner Donald Trump found himself on the defensive at the 11th GOP debate Thursday night, filleted by his rivals and the Fox News moderators on everything from his record on illegal immigration to his foreign policy acumen to the controversies surrounding his online education initiative Trump University.

While the brash billionaire could barely conceal his irritation at the relentless needling, he largely maintained an even keel — and besides, he's survived debate performances panned as far worse. It was only last week that a spirited Marco Rubio mercilessly lambasted Trump at the GOP debate in Houston — before going on to win only a single state on Super Tuesday, compared to Trump's seven and Ted Cruz's three.

The math is clear: Cruz — whose best contests are mostly behind him as the nominating contests turn to more populous, less uniformly conservative states — needs to win 61% of the remaining delegates to secure the GOP nod, while Rubio needs to win more than two-thirds.

Given Trump's current leads in winner-take-all states Florida and Ohio, which both vote March 15, the improbable may well become the impossible in the coming days.

So it's not much use to ask whether Cruz or Rubio drew blood Thursday night. Just as we were after Trump's clear victory on Super Tuesday, we're still looking at a world in which he is the prohibitive favorite to take on likely Democratic nominee Hillary Clinton in the fall.

What will that campaign look like? Trump gave us no shortage of hints on Thursday night.

With his party embroiled in a fierce civil war over his probable nomination, Trump moved to present himself as a pragmatic deal-maker who would unify both a fractured party and a deeply polarized country.

Though his broadsides against undocumented immigrants and foreign refugees have fueled perceptions of Trump as a bitterly divisive figure — and fanned establishment fears that his nomination would spell electoral doom — he sought to make clear Thursday night that he is not a rigidly ideological figure. Asked about his rumored statement during an off-the-record meeting with the New York Times that he'd show flexibility on his hard-line immigration policy, Trump launched into a spirited defense of compromise.

"In terms of immigration and almost anything else, there always has to be some, you know, tug and pull and deal," Trump said.

He contrasted his outlook with that of Cruz, who pioneered the 2013 government shutdown in a bid to defund President Barack Obama's signature health care reform law.

"When I watch Ted stand on the Senate floor, I had great respect for what he did," Trump said. "He stood there for a day and a half or something. In the meantime, what came of it? Nothing."

But Trump did more than signal he's a conservative who prizes getting things done above unyielding loyalty to ideological orthodoxy. In a remarkable moment, he changed a longstanding policy position on the spot, telling co-moderator Megyn Kelly that he was discarding his past opposition to work visas for highly skilled foreign workers.

"I'm changing [my position] and I'm softening the position because we have to have talented people in this country," Trump said. Such an on-the-spot U-turn may have felled a conventional politician, but Teflon Don has rewritten more than a handful of political rules over the course of his nine-month-old campaign.

What it means: Trump's controversial statements about immigrants, women and international affairs will give the Democrats plenty of ammunition in the general election. But Trump's performance Thursday night served as a reminder of his unpredictability — a negotiating tactic favored by the author of The Art of the Deal. That wiliness could make him a difficult rival for the Clinton campaign to handle.

Trump has long signaled that a general election campaign — and presidency — would look very different from his often-inflammatory primary bid.

"I'll change my tone" as president, Trump vowed to CNN's Anderson Cooper in July. But the recalibration will begin well before that, as Trump indicated Thursday night and during his Super Tuesday press conference in Palm Beach, Florida.

"I am a unifier," Trump said Tuesday. "I would love to see the Republican Party and everybody get together and unify. And there is no one who is going to beat us."

But with a majority of Americans also viewing Clinton unfavorably, the fall contest may well go down to the wire — and given the looming possibility of a major terror attack or an economic downturn, writing off Trump's formidability would be misguided, particularly in light of his improbable journey to this point.