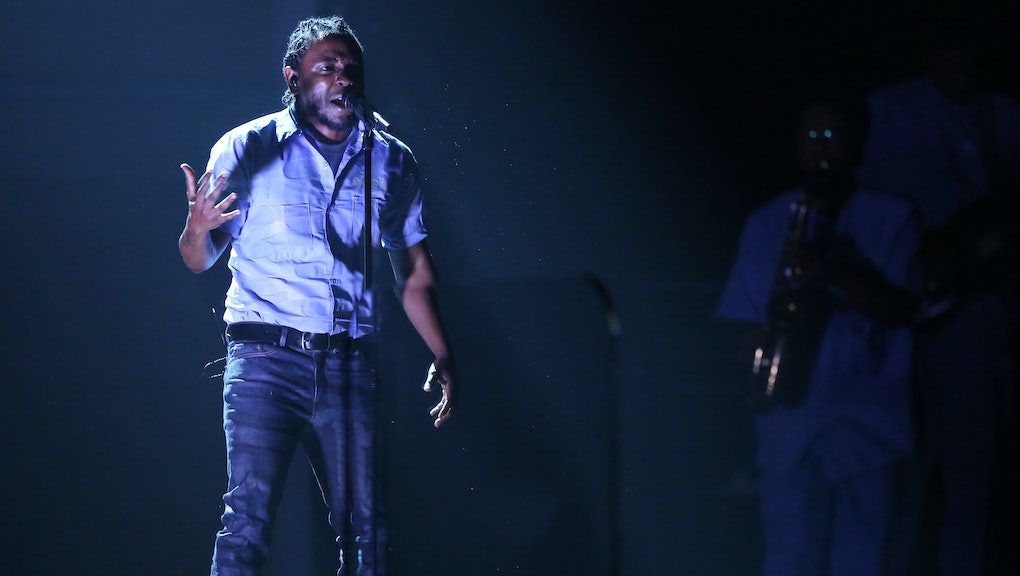 Grammy Award winner and hit-maker Kendrick Lamar surprised fans everywhere with an unannounced release on Thursday, Untitled Unmastered. The album, which trails 2015's To Pimp a Butterfly, came careening through the internet and onto morning commuters' playlists, and Lamar lovers tore into the eight-track effort to receive the unexpected gift of new material. A lushly-produced product, the lyricism on Lamar's latest is as politically charged as ever. And as Lamar's made clear to date, he's not one to shy away from social commentary — particularly as it pertains to race, spirituality and the onus of leading artists to make a statement.

"I made To Pimp a Butterfly 'fore you told me," Lamar raps on the album's opening track, "Untitled 01." "To use my vocals to save man-kind for you/ Say I didn't try for you, say I didn't ride for you/ I tied for you, I pushed the club to the side for you/ Who love you like I love you?"

On "Untitled 03," Lamar walks listeners through a swooning compartmentalization of religion and race. The track is bookended by an intro and outro and grounded by a catchy hook. In the track's lengthy verse, Lamar responds to four questions — "What did the Asian say," "What did the Indian say," "Now what the black man say" and "what the white man say?"

"A peace of mind/ That's what the Asian said, I need a divine," Lamar raps on the track, "Intervention was his religion and now it's a prize/ Him believing in Buddha, me believing in God. Lamar continues on to touch on spiritual enlightenment, rapping, "Meditation is a must, it don't hurt if you try/ See you thinking too much plus you too full of yourself/ Worried about your career, ever think of your health?"

Masterfully, Lamar brings up land ownership responding to "what did the Indian say" and hits on exploitation in his response to "what the white man say."

Responding to "what the black man say," Lamar raps, "A piece of pussy/ That's what the black man said, I needed to push me/ To the limit, satisfy my hunger/ Do it all for a woman, hair cut to a wool/ We like to live in the jungle, like to play in the peach," and later, "Pussy is power." Preach.

Elsewhere on the album, Lamar steers the dialogue to wealth distribution. On "Untitled 04," for example, a call and response ensues during which a whispered Lamar encourages female vocalist SZA to speak. "They tell me that my bill's past due, due, due, due," SZA sings, to which Lamar answers, "Talk about the charge you got."

"And preacher man don't always tell the truth, truth, truth," SZA continues. "Do you believe in God if you thought it's cool," Lamar asks.

Here and there on the album, a distinctive chant is peppered in, and it's a chant that closes out the album last track, the funk-infused "Untitled 08."

The album is available for download on iTunes and is streaming on major digital music platforms. Here's Untitled Unmastered in full: