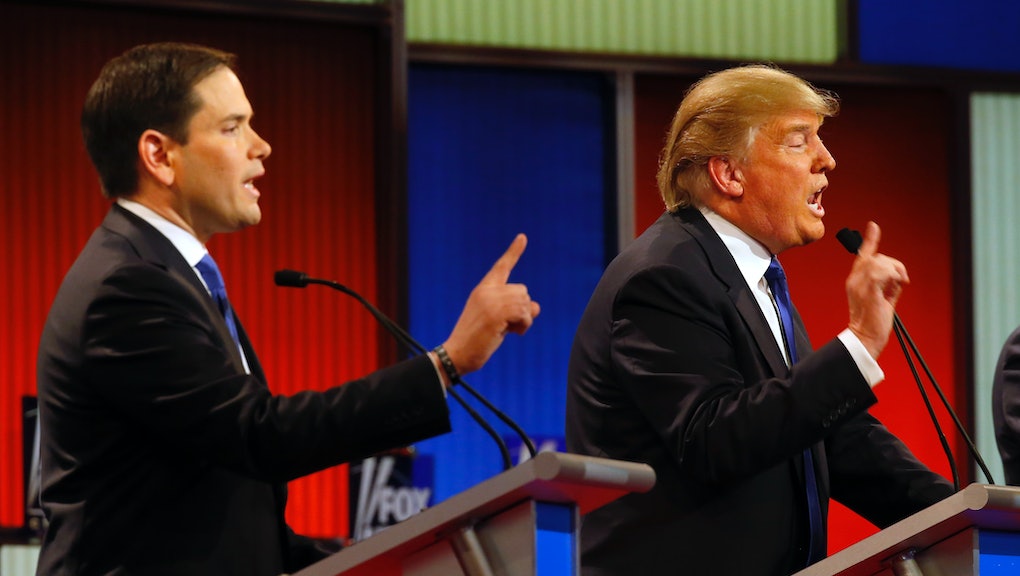 Check out all of Mic's coverage of Thursday's Republican debate here.

In the Republican debate in Detroit on Thursday night, Donald Trump and Marco Rubio exchanged pointed insults during a heated exchange over Trump's business dealings.

Trump got heated when challenged by Rubio about the fact that items from his signature clothing line are made in China — despite the frontrunner's insistence that he'll bring jobs back to the United States from overseas.

"Here we go," Rubio said with a half-smile.

Trump — who lost his clothing deal with Macy's after early campaign comments about rapists and drug dealers entering the U.S. via the southern border — actually agreed to change his business approach to overseas outsourcing.

"I will do that — and by the way, I have been doing it more and more," he said, arguing that Mexico and China "devalue their currencies and they make it impossible for clothing makers in this country to do clothing in this country."

Rubio wasn't buying it: "The reason he makes it in China or Mexico is because he can make more money on it."

Trump kept up the needling when Rubio said the frontrunner wasn't in the mood to give straight answers:  "Don't worry about it, Little Marco."